Madison is just the politest city in the world when it comes to protests.

We took the girls to the protests over Governor Teabagger’s (a wholly owned subsidiary of Koch Industries) evisceration of the state back in 2011, and despite all the hot air from right-wingers claiming it was some kind of war zone, the plain and simple fact of the matter was that I’ve been in rowdier grocery lines.  There were people walking around carrying trash bags for you to put your paper cups in so the place would stay clean.  Senator Herb Kohl – who is maybe five feet tall – showed up without any sort of entourage whatsoever and mingled with us.  It was far more civilized than the cold-hearted mayhem happening inside the legislative chambers.

So we weren’t particularly worried about the Women’s March that we went to this afternoon.

For those of you living under rocks, the fact that Donald Trump is now The Only President We’ve Got has caused serious consternation among people with more than seven working brain cells.  He’s a racketeer who has been sued more than a thousand times for everything from stiffing contractors to the open racism he practiced as a landlord.  He is currently in violation of Article 1, Section 9 of the Constitution and would have already been impeached if the Republican Party cared for anything other than maintaining their black-hearted grip on power.  And he is a sexual predator, something he seems inordinately proud of.

“Grab ‘em by the pussy” is really not something you want to hear from a presidential candidate, but it was apparently okay to the millions of so-called Christians who have wearied my ears and eyes with their claims that he is some kind of moral exemplar for our fallen times.

This tells you all you need to know about the morality of such people.

Kim spent much of the week knitting a “pussy hat” – the pink hats with cat ears that became the symbol of this particular protest.  The girls, being now teenagers and not particularly ambulatory on weekend mornings unless absolutely required to be so, decided to sit this one out, so this morning it was just me and Kim headed to Madison to meet our friends Heidi and Travis and do our part for participatory democracy. Yes, men were allowed.  As the sign says, “Men of quality support equality.”

And to be blunt, any male (you can’t really call them a man) who tries to grab my daughters the way Trump advises without their express consent will have their hand removed at the shoulder and then returned to them through the nearest convenient orifice.

I think that message is worth marching for, just on its own.

We gathered at the Library Mall on the UW Madison campus, and waited for the official start of the event while more and more people filtered in.  You really can’t tell how many people show up to these things when you’re inside them – visibility is rather limited – but the local news has since pegged it at around 75,000.  Not as big as the 2011 protests, but still bigger than any city I’ve lived in since 1993 and nearly a third of the size of Kommissar Trump’s inauguration crowd.

Seriously, watching that clueless vulgarian try to tap dance around the fact that his inauguration was so poorly attended has been the funniest bit of political comedy I’ve seen in weeks.

We stood there for about an hour, on a grey, drizzly, unseasonably warm day, listening to the chants that would periodically emerge from the crowd and reading the signs.  There were some pretty clever signs (my favorites being “I would have preferred an actual swamp” and “Free Melania!”).  The crowd was friendly and talkative – I spent a good quarter hour chatting with a guy who washed up next to me in one of those eddies that crowds have – and eventually we were off.

Crowds that big don’t move quickly.  It probably took half an hour for us even to begin our trek up toward the Capitol, and then we moved at a fairly slow shuffle for a while until the crowd thinned out enough to let us walk. 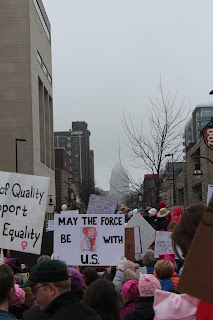 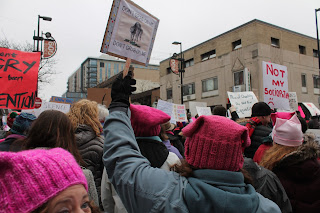 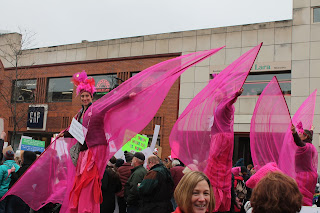 It was quite a scene.  This is what democracy looks like.

We got up to the Capitol and decided that we were old and hungry and needed lunch, so having done our bit for democracy we headed back to our car and drove off to find some food.  It was a lovely meal.

I have no illusions as to what the results of this march – or any of the more than 600 other similar marches across the United States involving millions of American citizens and other marches all over the globe (including Antarctica, surprisingly enough) – will be.  The modern Republican Party has made it very clear that it has no particular interest in serving anyone other than its plutocratic masters, a fact which (credit where due) Donald Trump has not bothered to hide the way that Governor Teabagger (a wholly owned subsidiary of Koch Industries) tries to do.  Look at his cabinet, and be awed at the sheer brazen declaration of this fact.

There will be no policy changes, not yet.  There will be no sudden realization that maybe if millions of people across the nation and the world consider your actions problematic enough to protest publicly you might want to reconsider.

But we march anyway.

We march to send a message to those in power, to make sure that our voices are heard.  It’s a fairly simple message, really.

You are on the wrong side of history, morality, and American values.

We will make sure you are forgotten. 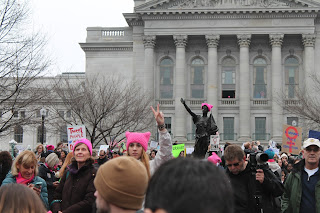 Back in the early 70's, I used to do a lot of marching and protesting. Usually on the front line. But on May 16, 1972 I got trampled in a stampede while antagonizing certain LEOs at a Viet Nam War protest. Trump would probably say something like "Very Bad!" ::shudders:: I haven't been able to do crowds of any size since then (can't even handle Wally World if it gets to busy - Christmas shopping at the malls? For. Get. IT! ::shudders again:: Thank Thor for Amazon!).

There is a clinical name for my particular phobia (Enochlophobia) which my spell checker hates even more than I hate crowds. Apparently. So, we will try the alternate Agoraphobia which is somewhat inaccurate but acceptable to the spell checker. Agora- refers to a fear that the environment is dangerous, while Enocio- is specific to Crowds of People. I'm much more comfortable standing in the middle of a herd of cows than a herd of Humans. Watching video of Times Square on New Years or the Women's March on Washington yesterday is a recipe for weeks of nightmares.

Still, that 'activist' part of me wishes that I could have participated, if only from the sidelines - however, even the sidelines are dangerous once that sea of humanity starts to move ... see?

Kudos to you and all who participated in my stead.

Bea - Someday. In the meantime, we press on.

I've heard of agoraphobia - can even tell you the etymology of the word - but hadn't come across enochlophobia. Now it's your turn to introduce me to a new word. :) I enjoy crowds, but have never been trampled by one so there's that. Came close once, on an amusement pier in Ocean City NJ, but the lights snapped back on and everyone calmed down. I imagine I'd have a different perspective had that not been the case.

Let us just agree that the perspective gained from such an experience would not be worth the cost.