Today would have been my dad’s 78th birthday.

Normally I would call him, and we’d talk for a while – sometimes up to an hour, less as his health declined last year.  We did that a lot, actually – not just on his birthday.  It was one of the things I looked forward to, week in and week out.

We’d been trading phone calls since I went away to college.  I didn’t go all that far as an undergrad, really – maybe six miles as the crow flies – but there is a world of distance between home and college, as anyone who’s been in that situation knows, and a phone call is as good a bridge as any.  We would pick a night for calling and stick to that for a while, and gradually it would drift to another night and we’d stick to that for a while.  The nights drifted across the week, and my mailing address drifted across the country, from Philadelphia to Pittsburgh to Iowa and then finally to Wisconsin, but the calls never stopped.  Once a week, usually – enough time to build up a store of things to talk about without so many you’d forget some of them.  Less often if things were hectic.  More if they weren’t.

With my academic schedule, which demanded 10-12 hour days but was remarkably flexible about when, exactly, I put that work in, our calls moved toward the day rather than the evening, especially after the girls were born.  Over the years more of the calls started coming from me rather than the other way around, but not all, especially if it had been a while.

There wasn’t any particular set of things we’d talk about.  During football season we’d compare notes on the Eagles and their latest collapse or, more rarely, success.  Sometimes the Phillies.  We’d talk about the various family members and what they were doing, especially his granddaughters.  He enjoyed hearing about them, so far away.  We’d talk about politics sometimes – he was a Goldwater Republican who came to despise that party in the last couple of decades of his life, though I don’t know if he ever became a Democrat.  “Those bastards stole my party,” he’d complain.  I couldn’t disagree.  We'd just talk about whatever came to mind, and that was enough.

Usually when I called him on his birthday I would tell him to watch his mail, since I never remembered to get his card and gift sent off in time.  We have a Movable Feast tradition in our family, though – holidays happen when you have time for them – and he enjoyed them when they arrived.

We told jokes to each other too.  He had a great sense of humor, and when one of us came across a new one we’d share it.

They were good conversations.

I will always be glad for them. 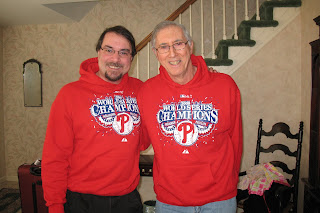 It's the conversations you miss. There are so many thoughts you like to share with them and now they have passed on. A solemn thank you to our fantastic father's!

We left nothing unsaid, and yet there is more to say.