All Hail the Rabbit of Easter!

We’ve been working on Easter for a while now.

The girls spent the better part of two days this week dying eggs, for example. There was a time when this was a full-family event fraught with all sorts of Humpty-Dumpty-esque peril, but that was when they were younger. At this point we no longer have to help them or even supervise them, so mostly we just check in now and then to see what goodies they have come up with.

They do pretty well, I think. 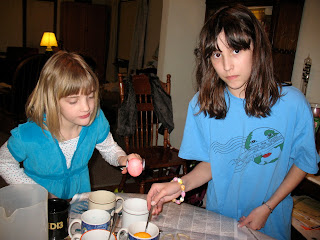 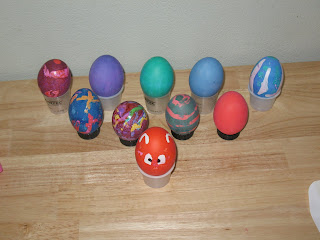 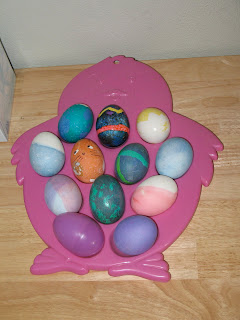 And of course as the arrival of the big day getting closer and closer anticipation ratchets up to a fever pitch, with visions of sugar bombs dancing in their heads. Frosted sugar bombs. Chocolate-frosted sugar bombs, with powdered sugar on top.

All this has its downside, of course. At 6:20 this morning Lauren – a morning person in the best of times – was already bouncing around our bedroom working on her pre-sugar high.

Fortunately for her she got to experience the real thing a few hours later, when everyone else was in a proper mood to crawl out of bed and not wrap in duct tape those who greet the day with energy and volume.

Yes, we were in fact visited by “the rabbit of Easter,” as David Sedaris likes to put it. The annual delivery of the entire sugar output of Cuba went off without a hitch, much to Lauren’s delight and amazement. Tabitha, no stranger to sugar lust, was a bit more subdued as you would expect the older sister to be, but nevertheless the arrival of a metric buttload of chocolate and assorted other sweets is not something to be ignored no matter how much the older sister you are.

It was a little different this year, though.

Normally the Easter Bunny comes to our house bearing not only sweets but yarn – large piles of yarn in two distinct colors. Each girl’s bed gets one color of yarn attached to it, and then the trick is to follow the yarn from there all throughout the house to where the chocolate is. It’s a charming tradition, but not one that is very friendly to those who need to get up in the middle of the night for any reason.

And a happy morning it was.

Happy Easter, one and all.

The Lord is risen.

And with enough chocolate He may stay risen for the rest of eternity, much as Tabitha and Lauren will. 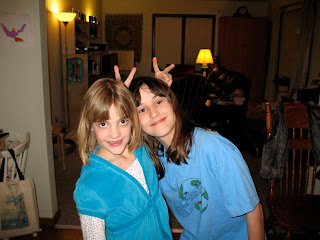 Speaking of David Sedaris, did you know that in France the chocolate comes by Easter bells, not bunnies? I know, that is just f*cked!

I know - that's the larger context of the David Sedaris quote. It's a long story he tells about being in France, taking a French language class, and getting hung up on the details. It's wonderful. You can hear it at http://www.thisamericanlife.org/radio-archives/episode/148/The-Angels-Wanna-Wear-My-Red-Suit - scroll down to the 47 minute mark when the popup window appears and settle in for a good time.