Our Trip Out East, Part the Third and Final

We spent the last part of our vacation in low gear, because a vacation is not something you should need a vacation to recover from.

We actually planned for this fact this time. The last time we went to Cape May, two years ago, we spent several days with my parents afterwards also. That time we arrived in Philadelphia with an entire agenda of people to visit and things to see, but aside from a group expedition to see WALL-E we pretty much spent those three or four days staring blankly at the walls and smiling over the good times we’d just had before packing up and returning to Wisconsin.

It’s all that relaxing – it really takes it out of you.

So this time we adjusted.

Our first day back was spent hanging out with Jenny, Koji and Kei, which was about our speed. The grownups had a grand time chatting at the park while the kids ran around, and then we moved on to a nice lunch before hanging out with my parents while the kids ran around. I even got to go over to visit Jenny and her parents for a bit while – wait for it – her kids ran around there. Kids must siphon all that energy directly from their parents. Before we had kids we had all sorts of energy; now they have it and we don’t. If I could patent this process I’d be rich, but I just don’t have the energy to think about it. It’s a vicious, vicious cycle that way.

Monday we decided to get a little more ambitious and actually travel into the city of Philadelphia.

Lauren was the one who led this charge. Lauren is very conscious of what she gets to do or not do in the way that younger siblings tend to be, and she gets very concerned about perceived injustices when the “not do” list seems to be outweighing the “do” list. And one of the things she decided needed to be moved from the former to the latter was to take a train ride. She’d never been on a train, at least not a full-scale one. That Tabitha hadn’t either didn’t matter. She wanted to ride on a train.

Fortunately for Lauren, Philadelphia has lots of trains, including a fairly extensive light rail system that the commuters use. As I was one of those commuters earlier in my life I’m pretty familiar with how it all works, and there is a train station not all that far from my parents’ house. So we wandered on up and bought a day pass while we waited for a train that was not in mechanical distress to come by. It was quite a wait. It was a good thing that the station now houses an allergen-free bakery that sells chocolate chip cookies as big as your head.

But it was worth it, as Lauren and Tabitha were both captivated by what had become through dint of repetition a rather mundane experience to me. You forget after a while just what a magical thing a train is when you ride on it day in and day out, and it’s nice to be reminded of the romance of the iron horse, even if it is just commuter rail. 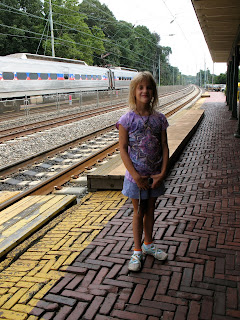 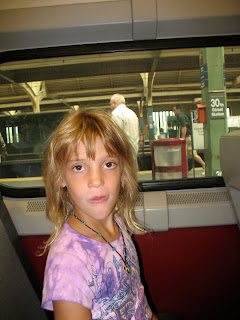 By the time we got into the city it was lunchtime, so we walked the block or two up to the Reading Terminal Market and began our quest for sustenance.

If you’ve never been to the Reading Terminal Market, you should go. Imagine an entire 19th-century market street crossed with a modern mall food court (local restaurants only) and stuffed inside a cavernous unused rail station. Now people it with a crush of locals on their lunch hour and tourists there for the experience. Fill it with the scents of delis, fish shops, spice shops, and restaurants serving everything from cheesesteaks and hot dogs to Chinese food, crepes, sushi and ice cream, and throw in a used book store as well. That’s a start. You should go.

We even got soft pretzels with mustard while we were there, the way God clearly intended them to be eaten. If that isn’t in the Bible somewhere, it ought to be. 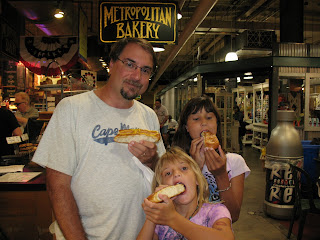 We spent most of that afternoon at the Market, but eventually we wandered further downtown and went to the Liberty Bell, one of the girls’ favorite things in Philadelphia. I am very happy that this is so. 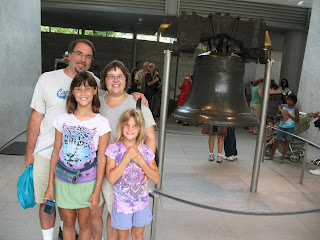 A block or two away we stumbled into a re-enactor drilling a flock of tourists in the proper calls and formations for Revolutionary soldiers. He was loud, historically accurate, and deadpan funny, which is about all you can ask for from such a performance. Eventually he marched them across the street to the back of Independence Hall, where several re-enactors read sections of the Declaration of Independence by the statue of Commodore Barry, founder of the US Navy, who seems have found something interesting out on the horizon. 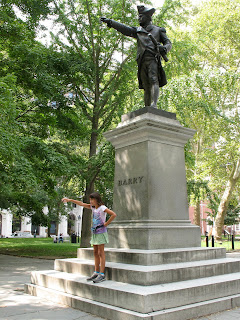 The next day we went to the Philadelphia Art Museum.

This has long been a goal of Kim’s. Kim loves art, and she has passed this down to her daughters. And good for them, I say. Me, I prefer my arts to perform. The original plan was for Kim and my mother to take the girls down, but since Lauren in particular insisted that I come along, I did. And it wasn’t bad.

We spent most of our time in the 19th-century wing, surrounded by Impressionists. 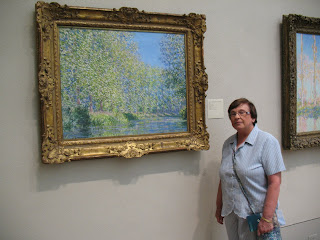 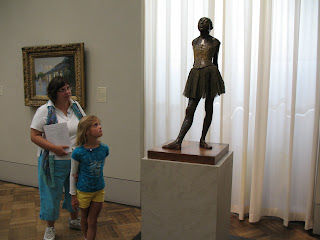 Kim loved the Modern Art as well – she is a fan of Kandinsky and other such painters – but I was mostly just confused by it. There was an entire room full of sculptures that seemed, well, odd, and while some of the modern art had pleasingly energetic simple lines, much of the rest just escaped me. But I said nothing, as I was under strict orders not to prejudice my daughters against this stuff and, really, I have no illusions about my being an arbiter of taste in this department. If they like it, well, good for them, and I think they did.

But the medieval armor room was something of a relief to me, I will admit. 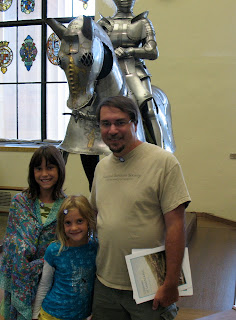 I think the most amazing thing about the museum is that they have all this astonishing art – Degas, Picasso, Van Gogh, Kandinsky, DuChamp, Renoir (my favorite piece was his “Large Bathers,” which seemed like something where the subjects were actually having fun) and so on – and it’s right there just hanging on the wall in front of you. You can walk right up to it. I think that’s marvelous, really.

But all good things must come to an end, and so we had to return to our lives – our regular lives, where we have to take care of our own selves, of all things. So we packed up and headed west, stopping briefly in Pittsburgh to allow Tabitha the experience of “O” Fries – the greatest French fries in the world, available by the bushel basket at the Original Hot Dog Shop on Pitt’s campus. 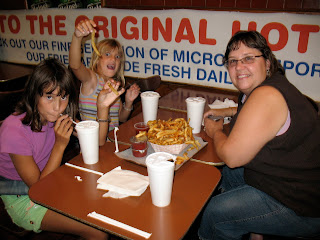 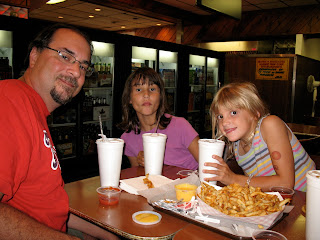 That’s a large, and it fed the four of us comfortably.

Let's do that all again!

Reading Terminal Station rocks. Issam had two lunches there one day, within twenty minutes of each other.

Issam is clearly a man of taste and distinction. :)