Kim is in the middle of learning two different languages these days because that sort of thing is fun for her.  Mostly I just check to see that she has fulfilled her commitment, because that Duolingo owl does not screw around. 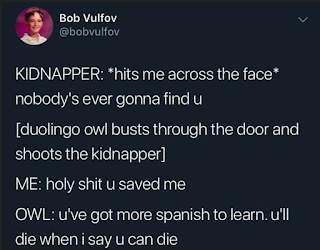 Me, I figure I’ve got my hands full with English.

I’m actually pretty good at linguistics.  I have a few accents that I can do convincingly (I once nearly had someone convinced I was fluent in Spanish because the sentence that comprised 80% of my working Spanish vocabulary came out sounding pretty natural) and I enjoy learning about the structure of languages in general.  The history of the English language has long been an interest of mine, and one of my prouder bureaucratic achievements as an undergrad was convincing the history department to allow me to count that class toward my major.

But actually learning languages?  Not really.

I spent four years in junior high and high school sitting dutifully through Spanish classes because out of the choices I was given Spanish was the only one that was more or less phonetic.  Medieval French scribes were clearly paid by the letter, which is the only way that any language could possibly have evolved to have “eaux” pronounced as “o” – and German seemed confusing to me.  Plus even then I had a sense that Spanish would be the more useful language to know here in the modern US, and this has in fact been proven correct.

But in my junior year of high school Spanish ended up conflicting with something else I needed to take and that was that.  It did not cause me pain when this happened.

When I got to college I was told I needed to take a foreign language to graduate.  I distinctly remember sitting in the advisor’s office – I lived close enough to campus that I could head down for a face-to-face appointment during the summer – trying to think of a language I could take.  At that point in my life I was deep into my Tolkien phase and, having grown up in an area settled by Welsh Quakers who spent most of their free time festooning local geographic features with inordinate numbers of ls, ys, and ws, I asked if I could take Welsh.

There was a pause, and then the advisor excused himself for a few moments.

“We don’t do that here,” he said when he got back, and you have to hand it to them that he had to check that first and didn’t just dismiss it out of hand.  I mean, you could take “Conversational Urdu” at this university (really, you could), so Welsh wasn’t completely out of the question.

I did end up taking an Irish history class while I was there, which isn’t the same thing as Welsh at all beyond a vague Celtic commonality but which convinced me that I didn’t drink nearly enough to try to learn Irish.  The one thing I remember from the class is the name of a king – Rhuadhri Ua’ Conchobair – which, it turned out, was pronounced “Rory O’Connor.”  Also, the odds were about even that any random group of up to four consonants between two vowels was pronounced as a “v.”

But that was in the future.  Sitting there in the advisor’s office, I still needed to choose a language.  At this point my mother’s genetic heritage reared up and I asked him if perhaps they offered Italian.  “Yes,” he said with some relief.  “We do.”

So I took a year of Italian, which it turned out is just similar enough to Spanish to get you confused but not similar enough to get you credit.  But my grandparents were pleased, and I really liked my TA – a grad student named Annarita who was, in fact, Italian and who kept us entertained and learning for two whole semesters – so it went pretty well.

You needed four semesters of a language to complete that requirement, but they offered us the placement test as our final exam at the end of Italian II and told us that if we could score a 50/100, they’d count that as our requirement.

Yeah, right, I figured.  Not going to happen.  I dutifully signed up for Italian III and walked into the exam with the relaxed confidence of someone who knows in his bones that this isn’t going to end well.

I didn’t find this out until a month after the semester was over, but – vide supra, re: living close enough to visit – once I did I wandered down to campus and headed over to the Italian Department.

“Does this mean I’m done with my language requirement?”

“Well, if you plan to take a literature course you should still enroll in Italian III because you’re not going to be able to keep up.”

“Ah.  You must have misheard me.  Does this mean I’m done with my language requirement?”

And that was that.  I never went back, and it didn’t seem to hurt me any, though it is a lovely language and one that perhaps I will go back to as events turn.

I got to graduate school for my MA in American history and was saddened to discover that once again I had a language requirement.  I’m not sure why.  Graduate school is not liberal arts education, designed to make you a better citizen of a republic and a more well-rounded person.  Graduate school is vocational training for nerds – as one of my undergraduate faculty mentors put it at a panel for people who were thinking of graduate school, “We don’t care what you’re like as a person.  We just want to know what you’re going to contribute to the discipline.”  I was there to learn how to be a scholar and a professor, and all of my research interests and sources were in English.

This argument did not impress them.

You could actually satisfy the requirement pretty creatively if you could convince them that it was relevant to your research.  Someone in the department who wrote a thesis on jazz history talked them into counting music theory as a language, for example, and rumor had it that someone else doing hardcore statistical analysis got them to accept a computer language.  But most people just took the exam – you were given a long passage and a dictionary and told to produce a passable translation in a given amount of time.  You could prepare for it by taking a class or two, but most people just jumped through the hoop with the dictionary.

This was before online language translators.

I decided I’d take the Spanish test, since there might conceivably be some primary sources on the 18th-century colonial US in Spanish but I couldn’t see any way for them to be in Italian.

For a number of reasons I won’t go into, my MA ended up taking longer than perhaps it should have, and I just kept shoving the language test off into the future where it could do me no harm.  Finally it was my third fall semester and I was frantically finishing up my MA thesis.  I figured I’d defend it at my oral exams in December, have a nice semester break, take the Spanish exam sometime in the spring, and graduate in May.  I didn’t bother applying for graduation.

But when I got back from my semester break, there in the mail was my diploma.

I called the registrar.

“Does this mean I’ve graduated?”

“You mean I’m done with everything and have nothing left to do?”

[Getting annoyed] “Yes, yes it does, young man.”

[Not going to push my luck any further] “Thank you!”

It’s been nearly three decades now, so the statute of limitations has run out on that.  And the University did, officially, tell me that I had my degree.  I asked.  I figure the History Department was just so relieved to see me finish my thesis that they waived the requirement, which was nice of them.

I chose my PhD graduate program in part on the fact that it had no language requirement.
Posted by David at 11:53 PM

I vividly remember Annarita when Dad and I visited on Parents' Day. She was about 24 years old and that day wore a two-piece suede leather outfit festooned with long fringe along the vest and the skirt hem, all of which moved seductively as she emphasized the correct pronunciations of her native language. She achieved perfect attention from every college boy in that class who seemed mesmerized by the beauty of the language. I don't know how much Italian was transmitted, but there was perfect communication of something in that class. Even Dad was sweating by the end.

Yes indeed, she was memorable. She was also a really nice person in general - I'd run into her sometimes on campus and she always made time to talk with me.

My favorite class memory was when the textbook had a chapter on Italian gestures. She got this really concerned look on her face and just kept saying, "No, no, that is not what that means" and spent most of the class explaining why we really should not do any of those gestures in Italy. She was looking out for us. :)

I've had the nightmare that someone shows up from the state bar or UNC to tell me I missed a class or final and no longer have a law degree. Not recently, but I've had it. Thing about the Dream Police is there's no statute of limitations on that.

Yeah, that's one of those recurring ones. Mine is usually the one about forgetting a class and not realizing it until the final exam. It's always math for some reason. Maybe it's my brain's way of telling me that I should have stayed as a math major.

I took a half year of French in the sixth grade. I still remember most of the lyrics to Friar Jack. (Not the French version, the English one.)

Being 1/4 Welch, I've always wanted to learn that. I do not believe that there is any chance of doing so before I die. Ditto Swiss & German for the unaccounted for half.

I've always considered it a source of Great Pride that I know just enough Spanish to get myself into a really good bar fight anywhere in town. Usually in seven words or less.

Other than that, I got nuthin'.

Both of my children took French, and now Oliver is up to his eyeballs in Ancient Greek as a classics major and Lauren is more or less fluent in German. Kim speaks Swedish and Ukrainian. Me? English and whatever it is we spoke in Philadelphia.

Learning Welsh is just not in the cards, alas. Maybe Italian, though. I may go back to that one. And I do feel like I should know more Spanish, given the students I serve as an advisor.

It doesn't take much to get into a bar fight if you're dedicated.