1. So I finally got my taxes done, after all that.  Everything got extended to July here in the Plague Year, but I know that July will be here sooner than I think and it’s just nice to have it off my plate.  Every year I have the same three reactions to this achievement, though:

a) I made how much money?  Really?  That much?  I have had this reaction when I worked a summer part-time at a 7/11, and I have this reaction when I’ve been working 150% of a professional academic job.  I suspect I’d have that same reaction if I were a millionaire.  It never seems like I’ve made that much money no matter how much money I’ve made.  Where did it go?  Oh, right.  Food.  Shelter.  Books.  You know, necessities.

b) I owe how much in taxes?  Other than the 7/11 years when my income was below the threshold for paying taxes, I am always somewhat aghast at how much I have to pay.  This is especially true lately, since our income is variable and dependent on supplemental appointments (“You have an extra class that you need taught?  Sure!”).  We can never get the withholdings right and we always end up owing a sum of money that makes me wince when I write the check.

c) I’m actually okay with that, though, or I am usually.  Taxes are the price one pays for civilization.  It’s how we fund everything from infrastructure to education to public safety to keeping people from starving in the streets, and I know that there are a whole pile of right-wing lunatics who regard taxation as theft but those people are catastrophically stupid and their opinion can be safely disregarded as the babbling nonsense it is.  I can’t say I’m happy about any of my tax dollars going to support der Sturmtrumper’s blistering incompetence and burgeoning tyranny, but I’m still holding out some sliver of hope that he and his enablers will be left on the dung heap of failed ideas soon.  We shall see.

2. Speaking of which, in the wake of President Snowflake’s toddler-level meltdown over being fact-checked by a private company, can we all just forgo the pretense and face the fact that the current administration is desperately trying to turn the United States into a dictatorship and the Republican Party is thrilled about it?  They have no respect for the Constitution, no respect for the rule of law, and no interest in anything other than their own power.  They don’t seem to understand that the First Amendment does not apply to private companies, but they sure do understand that their precious little feelings got hurt and they’re happy to destroy the internet and the nation in order to protect their ability to lie in public.  The Republican Party has been the single biggest threat to the survival of the American republic for a quarter century now, it has accelerated that threat markedly over the last three years, and it is long past time we treated it accordingly.

3. Honestly, if we have elections at all in November it will be surprising.  As the conservative columnist David Frum noted back in 2018, when discussing Trump’s GOP, “When highly committed parties strongly believe things that they cannot achieve democratically, they don’t give up on their beliefs – they give up on democracy.”  Watch your back, my fellow Americans, and prepare for what may come.

4. “Do you understand NOW!!??!?? Or is it still blurred to you??”  (LeBron James).  Folks, when an unarmed black man is suffocated by the police on a public street while white terrorists with assault rifles are allowed to take over state capitols without consequence, you can’t pretend it’s not about racism.  You either get angry and become part of the solution, or you remain part of the problem.  It’s that simple.

5. In less dire news, we went from late March to early July in the space of about 72 hours here in Baja Canada, and I for one have had enough hot summer weather to last me the rest of the year.

6. I have had my first Lockdown Haircut, and it seemed to turn out pretty well.  Fortunately my goals were pretty simple:  get rid of the High Sparrow look, and if I need to use a comb any time in the next fortnight it’s too long.  I found a nice little hair trimmer at a reasonable cost at my local supermarket a couple of weeks ago, set it to a fairly short cut, and spent about a quarter hour outside with it buzzing merrily away.  Kim cleaned up some of the bits that needed cleaning up, and now there will be fewer people randomly handing me spare change on the street corners and warning me about the evils of demon rum.

7. I don’t even drink that much.  Not even after reading the national news (see point 2).  I might be better off if I did, to be honest, but there you go.

8. I’m trying to make more use of our Netflix subscription these days, which is tricky for someone who finds watching almost any scripted television show or movie generally uncomfortable no matter how objectively good it is.  We have a lot of separate accounts on our Netflix and rather than try to figure out how to make a new one I’ve taken over Fran’s old account, now that she is back in Belgium.  Mostly I’ve been watching stand-up comedy specials.  Do you have any idea how finely Netflix parses that category?  There are approximately a thousand little clumps of comedy on Netflix, all neatly labeled and completely unreachable without the proper search keyword.  I found a section labeled British Standup and have been slowly working my way through it.  Some of it is funny and some of it not, as you would expect, and I have fun with the language differences between British English and American English (fellow Americans: do not, under any circumstances, refer to that little bag that you clip around your waist as a “fanny pack” while in the UK.  It will not end well).  I also found John Mulaney and Jim Gaffigan, on the recommendation of friends and family – they were fun.  Ally Wong was unwatchably dull.  And so on.  But these are times that require comedy, so we press on.

9. One of my favorite sub-subgenres of social media post these days goes under the general heading of “humans are space orcs.”  The basic gist of it is the idea that while most science fiction First Contact stories start from the idea that aliens are the big, scary monsters, what if it’s the other way around?  What if it’s the aliens who find humans frightening?  And if you think about it, it’s not that farfetched of a question. 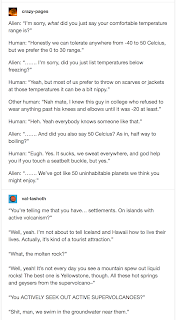 “You don’t know you’re from a Death World until you leave it.”  (unknown)

10. I’m finally done with last semester, but surprisingly this does not mean that I’m any less busy.  My first summer school class has already started, my summer appointment as an advisor is well into its new rounds of meetings and record-keeping, and I still have to prep my next summer school class, which starts in three weeks and has to be delivered in a format that we have never attempted in the 22 years that the three of us who teach it have been offering the class.  I may have a third class, depending on enrollment, and there’s a fourth one hanging out there that I could have taken if I thought it wouldn’t kill me.  And apparently there will be AP grading as well, timed impeccably to coincide with the first week of my team-taught class – the week where I’m the one doing most of the lecturing.  So it’s going to be an interesting time.  I’m grateful to be employed, but definitely tired.
Posted by David at 9:15 PM

1. I filed our tax return on February 2nd. Does that make me an over-achiever?

3. I have neighbors who are threatening to not vote at all if Nevada allows vote by mail. All of them are rethuglicans. Win!

4. Thought we had this pretty much taken care of back in the 70s. 80s. 90s … One begins to wonder ‘bout now if this country will EVER try to learn how to deal with its systemic racism problem.

10. Let me see if I can summarize: ‘Last week is done, but next week awaits. I’m grateful to be employed…’ but all is otherwise comparatively normal. Is that about right?

I still remember the rude awakening I got when I found out that in the real world you don’t get summers off to go play like teachers do, somebody somewhere actually expects you to keep working if you want that check on payday… Oh, and the teachers didn’t get summer off, either. That was all part of the con job called ‘elementary education’.

1. I suppose it makes you more on the ball than me, at least. I knew I was going to write a large check to the IRS so I was in no hurry to get it done until late March or early April, and then the world caught fire and they extended the deadline. Eventually it just wears on me, having it hanging out there, so I'm glad its done.

2. I generally date the transition from "party I mostly disagreed with but could still live with and occasionally, on very specific issues, actually support" to "threat to the survival of the republic" to either 1992 (when Pat Roberts kicked off the Culture War) or 1994 (when Newt Gingrich launched his Contract on America). So a quarter century is about right for me. Your mileage may vary.

4. I think it will, if only because by 2040 the country will be majority non-white and it will be dealt with regardless of the feelings of white people. I strongly suspect that this is behind a lot of the right-wing white supremacist frenzy these days, in fact. Those assholes know this is their last stand.

Summers got a lot less interesting when I had to work during them. I am not a hot weather person, and having to go to work removed the only redeeming feature of the season as far as I could see.