A Journal of the Plague Year, Part the Twenty-First - Bookmarked

It’s odd how objects become important to you.

I’ve always been a reader, at least as long as I can remember.  I learned to read fairly early and for most of my life I’ve never been more than a few feet from a book I was reading.  It’s what I do for work.  It’s what I do for fun.  It’s my great vice.  As vices go it’s not so bad, really – they’re inexpensive, nonperishable, generally good for your mental health, and unlikely to land you in trouble with the law, at least in the US, at least for now.

It’s been a long time since I read the sort of books that you could finish in one sitting, which means that I need bookmarks to let me know where to pick up when I come to a convenient stopping point in the ordinary concerns of regular life and can finally get back to my book.  Sometimes this is just whatever random scrap of paper comes to hand when it’s time to close the covers.

And sometimes it’s not.

When my children were much younger, they made me bookmarks. 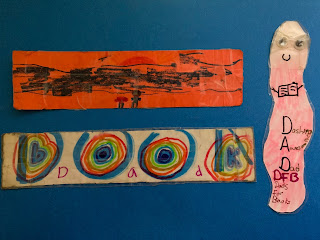 Oliver made the first one – the white one on the bottom of the photo.  Lauren, who has never been one to be outdone by her sibling, made the orange one not long after that.  At some point later the orange one got mislaid in my office for a few weeks so she made me the pink one to take its place.  It was a good day when the orange one turned up again and I was back to my full complement of bookmarks.

If you can’t tell, the two figures in the middle of the orange one are Lauren and me, looking off into the sunset together.  We’re at a beach, if I recall her explanation correctly.

For a long time these were the only bookmarks I would use.  I carted them (and whatever books they were in) across the country, to work, and generally wherever I went.

But after a while the thought of losing them just made me worry too much, so I put them on my bookshelf where I could keep an eye on them, these things that my children had made for me because they knew how much I’d like them.

I don’t get out much these days.  Most people of goodwill don’t, after all, unless it’s essential.  Which means that whatever book I am reading at the moment spends its days making the slow cycle from home office to living room to bedroom and back again.  They don’t leave the house either.

So I’ve pulled out my bookmarks for service again, and they keep me company now.

My children are older now – adults in their own right, either officially or unofficially so.  But I remember when they were younger and gave me bookmarks because they knew I’d like them.  And because of that these small objects are important to me, and always will be.
Posted by David at 9:41 PM

Look at that! This series can now legally go out and get drunk!

My bookmarks have always been something personal. My mother gave me one of hers when I was in the fourth grade that served me well until it, quite literally, disintegrated. I have tried to make a point to have them laminated ever since. The ability to do that at home without having to pay for the service was an important event in my life. I still own and use the laminate machine I purchased back in 1987.

Life progresses, and it is seriously not my intent to derail this post, but a conundrum has raised its ugly head in my world.

I found myself worrying last night: Who, precisely, will write the “Official History” of this period? Will it be Professional Historians, such as yourself, writing contemporaneously about the events as they happen? Or shall it be someone far removed from the actual events making their best assessments based on whatever evidence survives? (Perhaps even guided by your posts here on 4Q10D?)

There are arguments in favor of each, I suppose.

Being far removed and unaffected by emotional investment might provide a more focused lens through which to view this mess. [Alexander Hamilton]

Witnessing and experiencing the actual events and recording them in situ is difficult to improve on for clarity & passion. [Four dead in Ohio]

Perhaps we of this era will never even glimpse what history will say of our trumptime. We can always speculate, I suppose; however, mayhap it is better that we don’t.

I keep re-reading the above and find that I’m not at all certain that there is an addressable question in there anywhere.

No, probably inappropriate. Okay, then! Let's celebrate the release of Seven Samurai on this date in 1954 - I was six months old. I had, one could say, significant difficulty following the plot.

I don't suppose there's any need to choose between those sources.

People writing contemporaneously - whether professional historians or not - are writing primary sources. You can tell because they're first-hand information - "primary" - with no filter between them and the events. Eventually those will be mined by later writers to produce secondary sources - second-hand information - and with any luck some of those will be professional historians or people behaving as such anyway.

Primary sources have energy. They're unfiltered. They often get into the small details that elude later writers. But they lack a larger perspective simply because they're so close to the action. Secondary sources have that larger perspective and the ability to compare many primary sources to account for the biases inherent in them, but they are filtered and often focus on the big issues at the expense of the details that make life interesting.

The average human lives in a window two generations wide on either side of their life. Beyond that we rarely go.

I have no idea what professional historians will say about this era, though I suspect it will be scathing.

I will contribute what I can to that, of course. But I will also spend some of my limited window on the generations I can be with, and remember the small stories that made my life worthwhile.

You know, I've never seen Seven Samurai. I suppose I should someday.

A rather significant part of what drew me to this blog is your penchant for focusing on primary sources and the finer details therein. Please don't change that - Broad brush strokes are fine for filling in periods of time, but it's the details that make history compelling.

"Scathing", I believe, may fall far short as a descriptor. This may be another one of those periods in history that will require extensive ingenuity to find words that convey something far beyond credulity. Future historians may simply find the language inadequate and invent new words for the task.

For me, at least, Seven Samurai really wasn't worth the effort. I invested the time because everyone said I had to see it - something about the difference between Bruce Lee and Steven Segal - but IMHO The Magnificent Seven did a much better job of telling the tale, and you don't have to deal with the subtitles. Quite literally: if you've seen Yul Brynner's interpretation, you needn't feel compelled to spend your time watching Toshirô Mifune.

Well, I haven't actually seen The Magnificent Seven either, sad to say. Even back when I could sit through most movies without feeling uncomfortable and needing to leave (even when they are, objectively, good films), I was pretty much cinematically illiterate. And then my kids were born and I spent a decade only watching movies that had small talking animals in them. I should correct that at some point.

The same goes for television.

I like the details of the stories. I'm glad you enjoy them as well!

"spent a decade only watching movies that had small talking animals in them."

Oh. Okay, then. I stand corrected. Seven Samurai is right up your alley. 😉