We have chickens again.

I wasn’t sure whether we’d do that this year, since Lauren is away until nigh on the County Fair and won’t have much time to do anything with them, but habit won out and here we are.  Kim left this morning to go up to one of those Poultry Swaps that they have as a matter of course in this part of the world and came back with five new chickens – two Buff Orpingtons, one Lavender Orpington, one Golden Lace Wyandotte, and one Salmon Favorelle, and it is a sign of just how long I have lived in Wisconsin that I know exactly what each of those are without even looking.

I’m not sure we really needed more chickens – we already have more than a dozen of them out at our friend’s barn and we can’t keep up with the eggs we get every week now – but 4H is a harsh master and here we are.

They’re not chicks, exactly – it’s kind of late in the breeding season for that if you want them to be full grown for the Fair, so they’re something like “tween” chickens, not young but not full grown or even adolescent.  I expect them to be demanding trips to whatever the poultry equivalent of Claire’s is sometime soon and then won’t we have fashionable blinged out birds?

They’re sitting in a big plastic bin in our living room.  There’s about two inches of pine shavings and a feeder and a waterer in there to keep them company, and a heat lamp overhead to keep them warm since it is, technically, still winter, even though the temperatures are above zero Fahrenheit so it might as well be barbecue season, which is something we try not to discuss around the chickens as they consider it rude.  We have learned from The Great Turkey Fiasco last year and stockpiled incandescent bulbs for the heat lamp – one of which is, legitimately, designed as a heat lamp – so we should avoid the frozen bird problem that plagued us then, since LED bulbs are marvelous for the planet but not so great at keeping things toasty.  It’s also a lot warmer this year.

So far the cats have treated them with the studied indifference with which they have always treated the various poultry manifestations that have occurred in our house over the last decade.  They sniff around for the first hour or so, decide that they represent neither threat nor enticement, and then ignore them.  I suspect our cats would not actually recognize birds as food without them having been cooked first (the birds, I mean) so score one for domestication and keeping problems to a minimum.  Of course come the apocalypse when the cats are left to fend for themselves I give them maybe 48 hours before they are eaten by something higher up the food chain and more aggressive, such as a medium-sized hawk or particularly angry squirrel.  Every advance comes at a price.

We decided to skip the turkeys this year since nobody has time for that now – turkeys are amiable and friendly things but far more work than chickens.  Turkeys are livestock.  Chickens are weeds.  Lauren will still have one more year of 4H after this year’s Fair – perhaps two if she pushes it – and there may be another time for turkeys after this Fair.  We’ll worry about that then.

Farmer Dave, at your service. 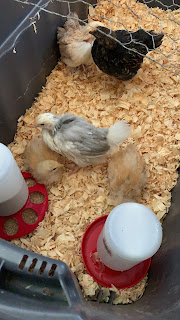