What do you get when you take a corrupt and authoritarian president, add in a well-deserved impeachment for high crimes and misdemeanors, and stir?

Apparently der Sturmtrumper – over the objections of US military professionals who actually understand things like “consequences” and “international and American law” – decided pretty much on a whim that he was going to violate US law and policy going back decades as well as the sovereignty of one of our most hard-fought-for allies in a region of surpassing national security interest in order to assassinate a guy that neither George W. Bush nor Barack Obama felt was worth the blowback this kind of stupidity and lawlessness would cause.

Our allies – those der Sturmtrumper hasn’t yet succeeded in alienating, anyway – are aghast.  The Iraqis have openly called for the removal of all American forces from their country – something they have every right to do, after all.  The US is hurtling ever close to international pariah status.  And the Pentagon is scrambling to figure out how to cope with yet another war that we can’t pay for.

Isn’t it amazing how we can always find money for catastrophically stupid military adventurism but somehow can’t find anything for taking care of the veterans who served, let alone anything like education, health care, infrastructure, or keeping Americans from starving in the streets?  Hello?  Is this thing on?

On the other hand, nobody’s talking about impeachment right now, which is after all the entire point of this exercise. 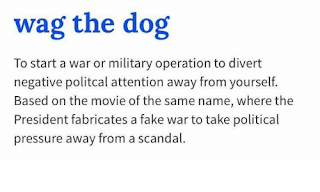 And just in case people do once again start to discuss the fact that he is only the third president ever impeached and the only one who truly deserved it, der Sturmtrumper has publicly declared that he will bomb cultural cites full of civilians, which is explicitly a war crime and for which he should be removed from office immediately and bound over for a military trial.

You will note that the Pentagon has publicly declared that yes this is, in fact, a war crime and no they will not, in fact, be following the psychotic demands of this unhinged president, because they know very well what kind of consequences that would have and the military is nothing if not practical in its calculations, even if it means insubordination.  US military code explicitly requires American military personnel to disobey unlawful orders, after all.

Not that the GOP cares of course.  They’ve given themselves over entirely to the Cult of Trump and can no more control their knee-jerk servility to their false god than they could stop ripping immigrant families apart in the name of “family values” (whose family? whose values? not mine), embracing political corruption in the name of absolute power, or enriching billionaires at the expense of everyone else.  It’s just what they do now.

My god but this country has been brought low by a rogue administration and its lackeys, cronies, minions and enablers.

Hang onto your hats, folks.  Impeachment keeps getting worse and worse for this authoritarian nightmare and he and his lackeys, cronies, minions and enablers will be doing more and more desperate things to distract from it.  They may well succeed.  Cult leaders often do.

There is almost no way this will end well, and may der Sturmtrumper feel every consequence that comes of it.
Posted by David at 10:51 PM

I tried to think of something relevant to say.

But this is a [more or less] family-friendly blog.

So I tried to phrase what I was thinking with about 17x10⌃27 fewer profane words.

Then my brain broke.*

There are times when profanity is precisely appropriate.

When a corrupt halfwit of a president and his chickenhawk cabinet bludgeon their way into the war they've been salivating over for years and which has reached new urgency as a way to distract people from that president's well-deserved impeachment, what else can one say but fuck him and his enablers and anyone who thinks it was a good idea.

"Fuck him and his enablers and anyone who thinks it was a good idea.

"Fuck him and his enablers and anyone who thinks it was a good idea.