If you’ve ever read A Prayer for Owen Meany, by John Irving, you know that the Christmas pageant scene is worth the price of the book all by itself.  I always think about that this time of year.  We had an annual Christmas pageant at my church when I was a kid, and it was pretty much the same chaotic whirl of children that Irving describes.

I don’t remember the original pageant that they were running when I was really little.  I think I was in that one once, playing a soldier with a tin-foil hat of some kind (really, the jokes just write themselves, don’t they?) alongside my friend Bobby, who was a year younger.  We weren’t the most intimidating soldiers in the Roman army, coming up about to the waist of the other actors, but we did our best.  They had to make a few changes after that because we were a small parish and didn’t have that many kids, and the soldiers got phased out.  Call it a peace dividend, which in retrospect is probably appropriate to the season.

The pageant I remember most was a fairly straightforward retelling of the Nativity story.

There were shepherds.  I liked being a shepherd because it involved almost no makeup and you got to carry around a big stick, which is about all a small boy can ask of the theater.  They knew better than to give us small animals.  My dad almost always got put in charge of shepherd-wrangling because he was good at it, being the sort of man who had a finely tuned ability to let go what needed to be let go and crack down on what needed to be cracked down on.  We’d do all our prep in the big parish hall and then wait until it was time to go on, while the grown-ups took photos.  I’m on the right in this picture. 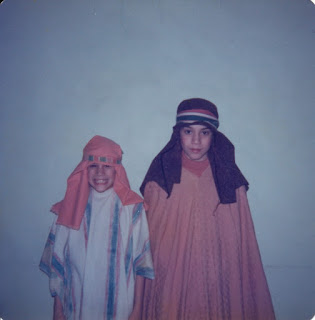 There were angels dressed in choir surplices big enough on them to be robes.  Some years they got halos and some years, well, you know, small kids.  Whoever had to be the angel Gabriel had to stand up in front of the church with her arms raised for unreasonable amounts of time, as I recall, which eventually led to several near-faintings and a revision to the blocking that allowed them to put their arms down in future pageants. 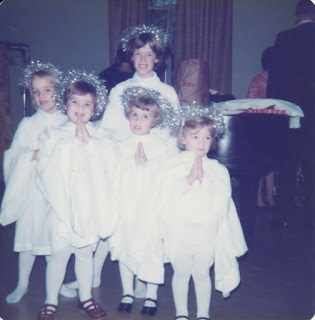 We shepherds would march in, be suitably amazed by the angels, and then slide off to the side while the main action occurred.

Joseph and Mary were the stars, and I think they came in next.  Those roles always went to the biggest kids, since they were the least likely to make faces or otherwise turn the whole thing into a vaudeville performance.  There are limits to how much you can get away with, no matter how cute you are.  They’d march up the aisle and speak to the innkeeper and his wife before heading off to the manger which was, conveniently, front and center so everyone could see.  What the innkeepers did during the rest of the pageant I have no idea.  I never got to play the innkeeper. 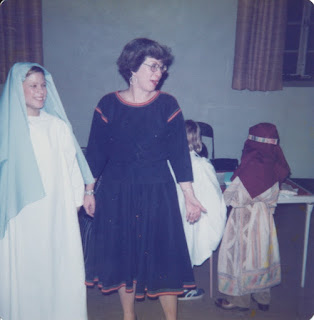 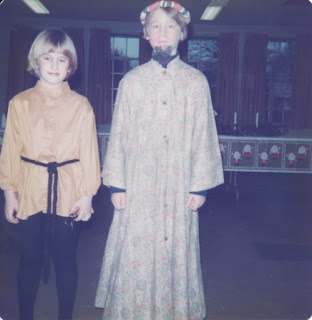 The wise men were kind of the highlight of the pageant, since they had all the best props.  They also had the most makeup.  When I got older I mostly ended up as a wise man – there weren’t that many young men in the church, so casting decisions were not all that flexible – and I cannot tell you how much I hated getting the beard put on.  This was back in the 70s when spirit gum and steel wool were the cutting edge of theatrical technology, and as soon as the pageant was over we’d race out to the bathrooms and scrape the stuff off with our bare hands. 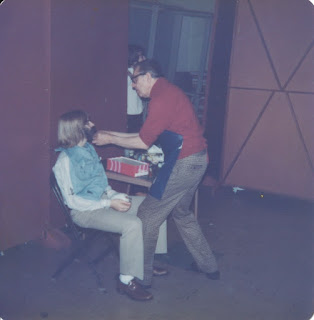 But we were stuck with it during the pageant itself. 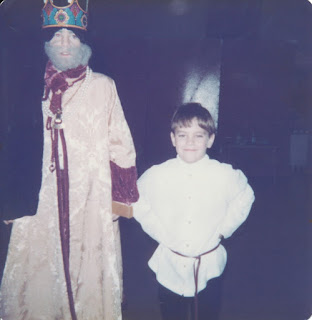 We’d gather at the back of the church and the choir would launch into “We Three Kings,” one verse at a time, and the appropriate wise man would march up for each verse.  We’d set down our gifts next to the manger – there was usually a large doll inside the manger dressed to look like what a baby Jesus might look like in suburban Philadelphia – and step aside for the next verse, until everyone was up front and the gifts all neatly arranged.

Then we’d sit there while Important Lessons were announced by various lay readers, making faces at each other and whacking each other with sticks until it was time to march back out.

To this day I still have a soft spot for “In the Deep Midwinter” and “Lo, How a Rose E’er Blooming,” as they were the exit hymns for the pageant and that meant we could head out to the parish hall, get rid of the beards, and make a beeline for the snacks that always followed in abundance.

I don’t know if they still do pageants there anymore – it’s been a long time since I lived in that neighborhood, and times change. 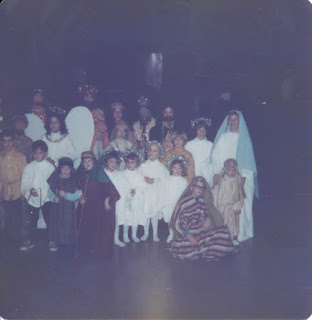