It’s October, and among other things that means that it’s Halloween season.

It gets harder and harder to keep the seasons straight these days.  For one thing, it was 80F this past week, which in Wisconsin in how we define June.  By this point in the calendar year we should be wearing jackets, drinking hot beverages, and getting the snow-blower ready for the winter.  Instead we’re cutting the lawn in our t-shirts and picking jalepeno peppers and tomatoes out of our gardens.  Good thing the climate isn’t shifting, because otherwise?  I’d be worried.

For another thing, the local supermarkets have had Halloween candy prominently displayed on the end caps for so long that the initial display candies have gone stale.  I don’t know about you, but I don’t tend to react very well to spooky orange marketing in August.

But it is actually October now, which means that we can legitimately begin to speak of Halloween.  And for us, this means a trip to Michigan over the Columbus Day weekend.

Every year around this time, Kim’s brother Dave and his wife Karen put on a Halloween Bash at the little place they own in southern Michigan.  They always schedule it for this weekend because their schools are off on Monday so they can make it a big thing, and even though our schools are open today (hey, Columbus never made it this far north, what can we say?) we like to go and take part.  We don’t get to see Dave, Karen, or Emily very often, and it’s good to take our opportunities when they arise.

We’ve been going since 2008, and it’s been fun watching the event shift around as the kids all get older.  When we started going there were puppet plays and karaoke and face-painting, and the Haunted Trail was the hit of the evening.  These days what happens is that we pull up at the swamp (excuse me: “wetland”) where the house is and Tabitha and Lauren jump out of the car and disappear into the cloud of teenagers that flows through the property like fog on a chilly night, and we collect them sometime the next morning.  In between those points the adults eat, talk, and drink and generally do all the Boring Adult Things that somehow become more interesting once you age out of your teens, and everyone has a good time.  They still have the Haunted Trail, though.  It’s really impressive.  You should go see it.

Dave also set up a Zombie Reagan Memorial, which actually had a Reagan figure spinning in its grave as quotes from der Sturmtrumper were displayed on the surrounding wall and a clip of an Obama speech pointing out just how far from Reagan the current occupant of the White House actually is played over a speaker.  It was, for him, a labor of love.

This year Kim couldn’t make it because she had chemistry labs to supervise – the joy of teaching an Online chemistry class is that you have to gather the people together for the hands-on part at some point – so for the first time it was just me and the girls heading out of Our Little Town.

We arrived slightly earlier than most people, so I told the girls to make themselves useful and drove back to the hotel to check myself in, because I have long been too old to sleep on the ground anymore.  This turned out to be an adventure for two reasons.  First, Kim had actually made the reservation back when she thought she’d be coming, which meant it was in her name.  It took me the better part of half an hour to convince the desk clerk that he should honor that reservation even though it was merely her husband trying to stay the night.  And second, that part of rural Michigan is a maze, as far as I am concerned, so I rely on our GPS to get me there and back.  Helen – as in “Keller,” if you’re keeping track – got me there and back for both of the round trips I took between the house and hotel, but directed me in three different ways for the four separate trips.  She’s good for tourism that way, I suppose.

When I got back, Tabitha and Lauren were helping Neil build the bonfire.  Every year we have a conflagration of a bonfire, which you can do on a wetland since nothing else is likely to burn – especially if it rains earlier in the evening, which it did this year, and Neil is the architect of it all.  He’s good at it.  I joined in, as did a couple of other folks, and the whole thing came together nicely. 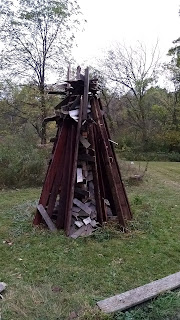 And then the teenagers disappeared, the adults ate, talked, and drank, and a good time was had by all, even as it rained for a bit.

When the rain let up, we went out back to the bonfire and set it off. 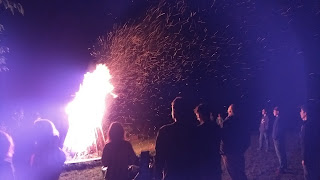 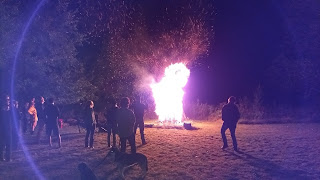 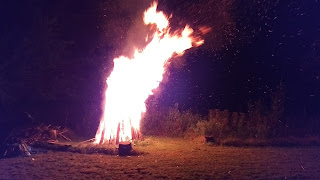 It was a windy night, which is why you’ll note the immense number of embers flying up out of the bonfire – a new feature this year that led to a few holes in sweatshirts and some minor blisters.  Also, our car is now covered in ash.  But it was a glorious fire.  There’s something about a flame that compels attention, and it was nice to stand and watch.

Eventually I went back to the hotel and collapsed.  The girls slept over, though as usual precious little sleep was actually achieved by anyone.  Today came fast and hard, but it was worth it.

Happy Halloween, everybody!
Posted by David at 10:50 AM

I have always heard about bonfires. What you have pictured here, though, is merely a campfire.

At our Family Reunions (a family made up mostly of pyromaniacs) we had BONFIRES on the beach. You would, in all probability, refer to them as conflagrations. And you would be correct. 25 - 30 10" diameter 10 ft. logs. The county fire department would send a well staffed engine + one truck and park them at the edge of the beach to protect the rest of the world. We would give them iced tea and burgers. They would watch us warily.

Family, friends, and pyromania. Good times. Little tuff to roast the marshmellons though.

Also, Little Known Fact:
In any business that plays Christmas carols in October, you’re legally allowed to kill the person responsible and use their body as a Halloween Decoration.
True in all 50 States and Puerto Rico!
( https://randysrandom.com/falls-coming/ )

I admit that we haven't had the bonfire that you describe (though as a former firefighter, I've had worse observation duty where nobody gave us food and drink, so good on you, I say) - I would have loved to see one of those bonfires. I will say, though, this year's was a bit smaller than last - the wind was pretty fierce and it knocked it down a bit.

Bonfire for the win either way, I say.

I loved that Little Known Fact. I need to make that a More Well Known Fact.

I'm going to have that reduced, printed on little cards, and hand them out to local store managers.

And, speaking of little known facts: ... former firefighter ...??? You now officially owe us one blog post. Do tell ...

And, as a former firefighter, these would would probably inspire nightmares. Knock it down a little 'cause of the wind? HA! Wimps! Bring it on! Get some more logs! And, that ever famous: "Here, hold my beer ... Watch This! ..."

Pyromaniacs. Need. To. Be. Watched. Warily.

I spent five mostly unheroic years as a volunteer firefighter in the suburbs of Philadelphia. We were also a rescue company, so I am in fact fully trained on the Jaws of Life. We got maybe 140-15 calls a year at the time, which worked out to a lot of accidents and car fires, some small-to-mid-sized fires, more than a few false alarms and/or vaudeville routines, and maybe a couple of real burners a year. I've gone into places hotter than anything I've ever cooked with. As my dad - also a member of the department - once put it, "It takes a certain kind of mindset to run into a building when the cockroaches are running out."

I would have loved to continue, but I have never since lived anywhere there was a volunteer company, and it was never my intent to make it a profession.

I have posted a few stories from that time, though not for a while. I do like this one, though.

As long as all I had to do was stand off and drown the conflagration from a distance, nothing about that would be nightmare-inducing. Now, ask me to go inside a smoke-filled inferno and find the flames on the second floor, and that's different.

Editing would be a nice feature. Most especially for the administrator. But, on the other hand, you are infallible and could never have need of such a superfluous tool. "140-15" is easily decipherable: 125 calls.

I, on the other hand, have to deal with my spell checker that substitutes words I then have to go look up in a foreign language code book.

Burning buildings are not a place humans are supposed to run into, and I commend sincerely anyone with the courage to do so. And, upon reflection, having recently witnessed such valor, will paste two additional extra credit gold stars on the forehead of anyone who does such things as a volunteer.

Oh, and that story 'bout the supply hose was fun, and as someone who deals with hoses on an hourly basis, I spotted the problem before you got the first adapter. Wish I'd been there to see that. (Wouldn't have said anything, but I would have enjoyed the whole Keystone Firefighters bit immensely.)

Yeah, it was one of those moments you look back on and wonder why it wasn't obvious right away, but when you're in the middle of things you just deal with the problem at hand and let the larger picture sort itself out later.

One of the older volunteers used to say, "Vaudeville will never die as long as there are volunteer fire companies."

It is a strange thing to do as a volunteer. I remember going to Firefighting I, up at the county school (we all had to be certified). One of the first things the instructor told us, all 60 or 70 of us out there on the field in our turnout gear, was "You people are fucking stupid. You're doing the most dangerous job in America, and you ain't even getting paid for it!" And yet everyone stayed.

To your credit and honor.