The last time I was on stage as an actor was back in high school.  I’ve done a couple of small performances since then, and you can make a decent argument that teaching is a form of acting.  But in terms of actually striding about on a stage with a set and lighting, trying to hit marks, speak lines, and stay in character, high school it is.

That was a long time ago.

I took a Shakespeare class my senior year, since it was one of the electives and it seemed more interesting than the others.  When the teacher got sick and assigned us small group projects in his absence, the class decided to change our many small group projects into a single big group project and put on scenes from Macbeth.  The sub didn’t care, since we were quietly working on Shakespeare-related things as far as he could tell, and the teacher was smart enough to roll with it once he got back.

The performance worked out pretty well for me, I have to say.  My teacher thought enough of my acting to try to recruit me for the next school play, which held no interest for this particular backstage crew member but was nice to hear.  And one lovely young lady in the audience decided that night that maybe I was more interesting than she had previously thought, which held considerable interest for me once I found out.

So I’ve always had a soft spot for Shakespeare.

I am also friends with the theater professor down at Home Campus.  This is perhaps why, when he rather suddenly had to fill a small role on this summer’s outdoor performance of Much Ado About Nothing, my name floated up to the surface of his mind.  It’s hard to find actors in the summer, apparently.  The cast had lost something like seven actors over the previous five weeks, and if I took the part they could move another actor up to a bigger part.

It turns out that the category of "things you do for friends" apparently includes being an actor for the first time in three decades.  While I’ve done a lot of theater in that time – possibly close to a hundred shows, depending on how you count – my home is backstage, not onstage.  I’m far more comfortable there.  But here I am.

Fortunately mine is a very small part.  I play Verges, who as near as I can figure out is essentially the Elizabethan version of Barney Fife.  He’s kind of dim, mostly a decent guy as far as I can tell, and would like very much to be taken seriously as a law enforcement officer, which is something that should never be allowed to happen under any circumstances if people wish the law to be enforced in any reasonable manner.  I’m comic relief, and pretty much expendable as far as the plot is concerned.

I joined the rehearsals last week, and have spent every day but one since then learning the part, either in full rehearsals on campus or in meetings of “the Dogberry group” (so named for the Andy Griffith to my Barney Fife) that take place in a park here in town.  Somehow I have managed to learn my baker’s dozen lines and stand in the right places most of the time.

Actually, the hardest part so far has been not laughing out loud during the interrogation scene when my partner demands of a captured criminal, “WHAT … is your name!”  All I can think of at that point is “Arthur, King of the Britons!” and that is just another sign that I am old, old, old.

We open today.  Maybe.  If the thunderstorms hold off.  The set is huge and cannot be easily moved inside, so we’re just hoping that it stays dry from 7pm to 9pm.  It will be a good show.

If you’re anywhere near Our Little Town, you should come by!

I have enjoyed the production far more than I thought I would, mostly because the people involved have been a lot of fun and it has been fascinating getting to know them even the little bit that I have.  It’s the people who make anything enjoyable, really.  I don’t foresee any future career as an actor – honestly, if the math holds true my next foray into Shakespeare would be long after my allotted three score and ten – but it’s been a good time here and now. 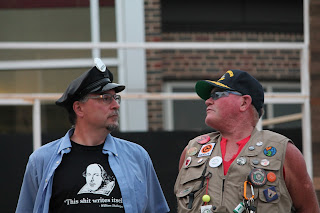 I wish I could be there, but, alas, I have my small own Shakespearean part to rehearse in Merry Wives of Windsor.

Oh yeah, and I live halfway across the country.

You can do the same for me.

Wait, wait, wait! Did you not also have a role in October playing the gangster? Dude, you're trending. Trending!

I don't know - that was mostly "wandering around in character" so I didn't count it. I suppose reasonable people could disagree, though.

I've never been trending. I wonder if I should revamp my wardrobe...