A Few Ideas in Wisconsin

I’m not really upset anymore when Governor Teabagger (a wholly-owned subsidiary of Koch Industries) lies to me.  Honestly, I’d be more surprised if he didn’t.  The man has a strained relationship with reality to begin with, and I wouldn’t trust him to tell me the weather let alone anything of actual substance.  I’m not sure he’d be capable of telling me the truth even if he wanted to do so.  Old habits die hard.

No, what upsets me is that he puts so little thought into his lies.

He clearly believes that the rest of us are stupid.  That we will swallow whatever half-assed excuse he offers for the most recent assault on the dignity, worth, and future of the state of Wisconsin without questioning him or doubting his story.  Part of me thinks that this is because he believes he’s the smartest person in the room and the rest of us are all just automatons there to do his bidding, not worth the time or effort needed to come up with lies that are at least plausible, and part of me thinks that he honestly believes the lies himself – that whatever nonsense he is spewing at the moment is the Truth and we’re all just being unreasonable for not accepting it at face value and swooning over his bravery in facing this harsh, harsh world.

This, of course, is one of the definitions of psychotic.

The latest iteration of this sad tale comes as Governor Teabagger (a wholly-owned subsidiary of Koch Industries) is pushing his budget for the next two years for Wisconsin.  The budget is of a piece with the rest of his policies, an act of vandalism rather than sound financial planning.

Having spent most of his re-election campaign lying about the vast surpluses his slash-and-burn policies must have created during his initial assault on Wisconsin, because they must have, he now turns around and declares that rather than invest those surpluses in our children’s future he needs to continue his slashing and burning because – surprise! – none of those surpluses were actually real.  They were just another of his sincerely believed lies, trumpeted loudly enough to sucker his base into voting for him again so he could have a platform for implementing Charles and David Koch’s agenda in a presidential campaign.  The man is a sock puppet, but anyone who hadn’t figured that out by last November is likely beyond hope now.

His budget merges agencies, diverts funds from public education in order to expand the right-wing fantasy of private school vouchers, defunds public radio (the most reliable source of information in America, according to several studies I've seen), cuts medical benefits for senior citizens, and guts the Department of Natural Resources (and eliminates much of its ability to protect Wisconsin’s natural resources until long after his reign of terror ends).  The biggest cut, of course, is targeted at the University of Wisconsin System, which will absorb $300 million in damages even as it is legally forbidden from finding new income sources to make up that loss, because that’s what passes for responsible fiscal planning among the modern right wing.  It will cripple the UW, and that’s precisely the point.

On the other hand, he does want the state to spend $222 million on a new stadium for the privately-owned Milwaukee Bucks basketball team.  Bread and circuses for everyone!

So far none of this was unexpected.  Like many of the leaders on his side of the aisle these days, Governor Teabagger (a wholly-owned subsidiary of Koch Industries) has made no secret of his hatred of the kind of informed citizenry that the Founding Fathers knew was necessary for a republic to survive and he has done his best to prevent such a citizenry from surviving.  It will take a few years for the state to collapse completely, so I'm sure he figures he’ll be safely on his way when that happens and it won’t be his concern anymore. Won't he be surprised.

What did strike me – and many others – as rather more vicious than usual was his attempt to destroy the University of Wisconsin System at its core.

The University of Wisconsin rests on what is called the Wisconsin Idea, something that no other public university system has copied.  It has been part of state law for over a century now, and it identifies the UW as integral to the health and future of Wisconsin as a whole.  It reads as follows:

The mission of the system is to develop human resources, to discover and disseminate knowledge, to extend knowledge and its application beyond the boundaries of its campuses, and to serve and stimulate society by developing in students heightened intellectual, cultural, and humane sensitivities, scientific, professional and technological expertise, and a sense of purpose.  Inherent in this broad mission are methods of instruction, research, extended training and public service designed to educate people and improve the human condition.  Basic to every purpose of the system is the search for truth.


The Wisconsin Idea sets out a vision of a society where educated expertise is valued not merely for its practical benefits but for its ability to make this a better world for those living in it and for those still to come.  It ties together the university and the state, and upholds the social compact made between free citizens of a republic, a much more enlightened burden than that made between lords and peasants.

Naturally Governor Teabagger (a wholly-owned subsidiary of Koch Industries) has a problem with this.

So, buried deep in his budget, was the Wisconsin Idea According To Governor Teabagger (A Wholly-Owned Subsidiary of Koch Industries), to wit: 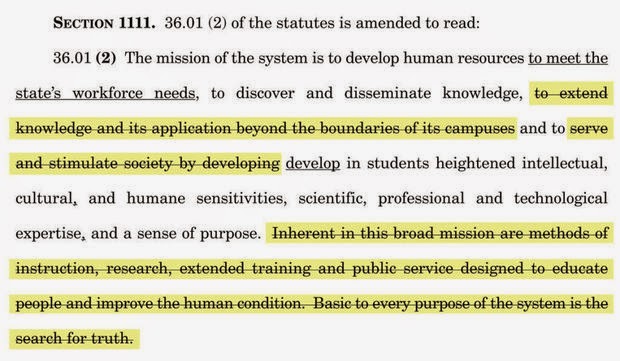 Notice first and foremost, the addition of the phrase “to meet the state’s workforce needs.”  Translated out of the Teabaggerese, this is a demand for the University of Wisconsin to degenerate into a taxpayer-funded corporate training center.  While this is certainly in keeping with the right-wing corporatist mantra of privatizing profits while offloading costs onto the public, it does raise the question of why, if corporations are the highest form of institutional life on the planet, they can't handle that themselves.  But that's the direction he wants us to go in.  If it ever gets enacted, maybe they’ll rename the football team to match.  Go Trainees!  Fight!  Fight!  Fight!

While there is only one message in the added text, there are two big messages in the deletions.

First, there is the wholesale elimination of any suggestion that the UW – and by extension any government agency – has any responsibility for promoting the general welfare.  How silly of the Founding Fathers to put that phrase in the Constitution, after all!  Clearly Governor Teabagger (a wholly-owned subsidiary of Koch Industries) knows more about the purpose of government than James Madison!  The parts about extending knowledge beyond the boundaries of campus, stimulating society, and improving the human condition are obviously Communist propaganda and do not fit into the modern right-wing refusal to accept any responsibility for anything, even as they drain off the accumulated achievements of past generations.

This, by the way, is the main reason why you cannot call them “conservative.”  Genuine conservatives, fired by the spirit of Edmund Burke, would be horrified at such obvious moral and intellectual bankruptcy.

Second, there is the rather telling deletion of the search for truth.  Truth is not kind to the modern right wing.  It has a disturbing tendency to contradict their carefully constructed and hermetically sealed ideological worldview, and therefore must be avoided at all costs.

Which brings us back to the lies.

I’m guessing that Governor Teabagger (a wholly-owned subsidiary of Koch Industries) didn’t think anyone would burrow down deep enough into the budget to catch that before he and his cronies, minions, and lackeys in the legislature had rammed it into law.  Given the irresponsible speed and reckless criminality with which they had worked to shove previous bills through the legislature before they could even be read, this is not an unreasonable assumption.  But someone did, and then all hell broke loose.

Turns out people rather like the idea that the University of Wisconsin is dedicated toward making the entire state a better place.

At first Governor Teabagger (a wholly-owned subsidiary of Koch Industries) attempted to defend this change, but eventually that became untenable.  So he declared that it was all a “drafting error,” and not meant for consideration.  This despite extensive documentation that the specific deletions and additions were explicitly ordered by his staff, right down to the last comma.

I’m sure he believes his own story.

Me, personally, I’m offended by the sheer half-assery of it.  Look, guy – I know you’re going to lie to me.  It’s how you came to power. It’s how you maintain power.  It’s what you’re building a presidential campaign upon.  But you know, the kind of rank incompetence you bring to this task is pretty much on par with the kind you display in most other areas of your administration.  Try harder next time and see if you can at least achieve plausibility.

He is outrageous. NPR rocks.