A Lesson from the Past

One of the things about genealogy is that you discover stories about your ancestors that you didn’t know before, which is kind of the point.

A surprisingly large number of my family members served in World War II, for example. 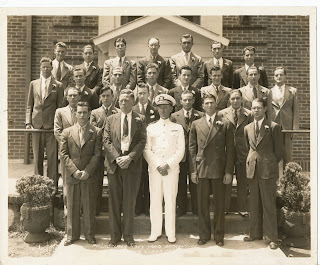 My grandfather is the guy in the front row on the far left in this photo. Twenty-nine years old and married with two kids under two years old when Pearl Harbor was bombed, he spent the war as a machinist instructor in the Philadelphia Navy Yard in the naval aviation section, where he’d been working for nearly a decade. He told me once that everybody at the Yard knew we were going to get involved in that war months before we actually did. In June 1941, six months before Pearl Harbor, his superiors ordered him to start training women to work in the machine shop, “which was ridiculous, at the time, women in the machine shop” he said. But his bosses knew that millions of men would be drafted into the army soon and labor would be scarce and so, then, did he. They also told him to stop trying to enlist for military service since he was more valuable to the war effort where he was, which was a great relief to my grandmother. 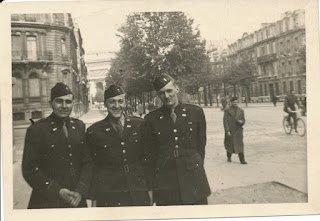 That’s my great-uncle John – my grandmother’s brother – on the left there, in Paris sometime in 1945 after the Germans had been driven out. The war was still going on when this photo was taken, but the front lines had moved on by then. He actually spent another decade or so in the army after the war and retired as a Lt. Colonel. 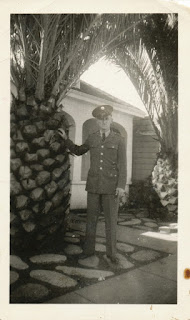 This was my grandfather’s nephew Anthony. 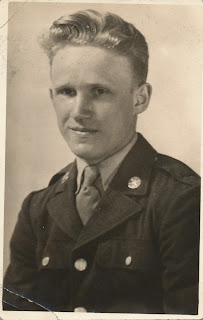 This is Anthony’s brother Lou. If I remember correctly it was Lou who was in some way tangentially involved with the liberation of at least one concentration camp in Europe, an experience that haunted him for the rest of his life. 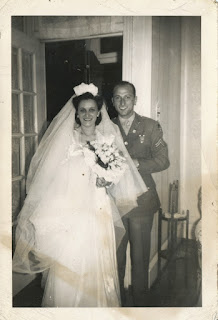 The groom here is my grandmother’s nephew John, the son of my great-great-aunt Nelly. 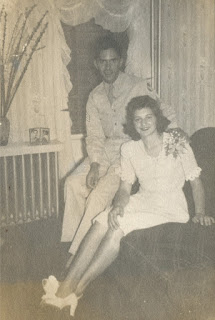 And this is Orlando, who married my mother’s cousin Annie.

They all served. They all did their part in the great struggle against Fascism that defined the middle of the 20th century, the largest and bloodiest war in human history. Some of them were awarded medals by the United States of America for doing so.

They sacrificed, they worked, and they suffered in order to see Fascism destroyed.

That Fascism has risen again despite their efforts – that it has risen here in the United States, in fact – is a tragedy. There are actual Fascists running the American government today, and the fact that they have any support whatsoever is one of the greatest moral failures in American history.

My family served in the struggle against Fascism in World War II.

I will not disgrace their memory by supporting it here in 2020.
Posted by David at 10:33 AM

My Father served. Lost 70% of his hearing due to firing artillery shells.

Two of my uncles served. One, my mother's younger brother, at age 20, flew 78 missions as a waist gunner on 5 different B-17s over Germany (Three of those planes just barely made it back to England. One only made it halfway back across the Channel after one of the Dresden raids. He was always haunted by Dresden - he said there was no moral justification for it.) He used the GI Bill to become a Doctor. He came out of retirement in March this year just one month shy of his 97th birthday to lend a hand in the ER of the hospital in which he spent most of his life practicing. COVID killed him less than three weeks later, but he died doing what he did all his life.

It is that level of (I'm not sure of the term I'm looking for here) moral virtue? Honor? Righteousness? Decency? Maybe that's it. Simple decency. It is that level of simple decency that seems to have become so rare in these latter days. Seems ... [Ω] ... There are many well-founded reasons for calling that generation the 'Greatest" - the willingness to selflessly put your life on the line in the service of your fellow Human Beings is chief among them. Inexplicably, fighting to rid the world of fascism has become a cause célèbre these days. It's a cryin' shame so many of our fellow citizens can't see why that should be an indisputable thing.

Ancestry can become an all-consuming obsession. However, there are also great rewards for the time thus well-spent. Preserve the documentation you are able to obtain. Even if no one else ever sees it, at least you will have invested the effort to remember.

I hope you are preserving these stories yourself - your uncles sounds like they had a lot of them, and it is a shame that his selflessness cost him so this year.

There is a conspicuous lack of human decency these days. We try to keep its flame lit as best we can. But there are times when wrath is warranted, and one of those is when Fascists rise up to demand power and need to be put back down.

As a historian, remembering is what I do for a living. It is, I think, a noble calling.

It is, indeed, a very noble calling.

LucyInDisguise, thanks for sharing those stories about the sacrifices of those in your family. I was inspired by the story of your uncle who went on to work in the ER at age 97. Wow. And proud of your family for caring for their community.