1. The semester seems to have come to an end without any noticeable drop in frantic activity, which is both a nice thing in that it means I will be employed and earning money this summer (not a guarantee for anyone in the academic world) and a difficult thing since it means there will be no particular reduction in stress or the general “beating back the alligators” mindset that one adopts to get through the year.

2. Much of the stress comes from the fact that Home Campus is in the middle of several different transitions right now, each of which could, on its own, occupy the full attention of everyone on campus.  They’re all getting managed at the moment with only the expected levels of crisis so that’s a good sign, but still.

3. It’s already too warm for me.  August will not be my time, I imagine.  Seriously – I’m going to retire to Scotland for the weather.

4. The turkeys are out and about now, though – they like it warm.  I spent a chunk of yesterday fixing up their outside enclosure and they were eager to get to it.  You can’t help but love the turkeys.  They scamper about happily exploring their newly expanded world, cooing and chirping (they haven’t reached the stage where they gobble yet), and generally being the stupidest creatures on earth, but amiably so and that has to count for something. 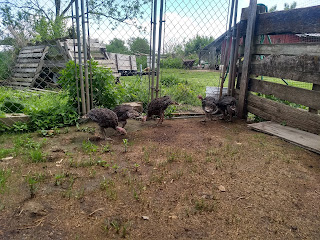 5. Is it a bad sign when a (different) employer finally comes through with the paperwork for a week-long job – paperwork that you have had to ask them for three separate times – and your first reaction to this is just “oh”?  Asking for a friend.

6. Every time I look at the news der Sturmtrumper is doing something that would embarrass a toddler, destroy everything worthwhile about this nation from its economy to its culture to the Constitution itself, and/or weaken US security to the point where it might as well not exist at all.  It’s a sad, sad time to be an American, yes it is.

7. It’s always nice to see your daughter win awards and hear her teachers say good things about her.

8. I’m trying to dig my office out from under all the paper that accumulated over the last semester or two and all the other things that floated in there on the Stuff Jetstream that eddies through our house.  So far I’ve managed to get exactly one part of that done – I’ve taken the papers (a stack that was literally a meter high) and sorted them.  Half will be recycled, and the other half put away.  Next step: going through the books and deciding how to organize them.  After that, I may attempt to deal with my desk.

9. One of the defining features of being an adult is the ability to procrastinate while remaining entirely productive.

10. Leon Redbone died yesterday and the world is just that much poorer for it.  A moment of silence for a great performer, please.

5. Tell your friend that it is merely a sign. Type of sign as yet undetermined, but it’s probably just a highway sign. (Something like “Slower Traffic Keep Right” or “Dead End” or something, something or other something.)

10. Actually, I just came in here to mention that my first exposure to Leon was the first(/) season of SNL. His was a talent without much equal. I’ll see you a moment of silence and raise you a his request (from 1977):

I'm probably misremembering seeing that on the Schuylkill Expressway in Philadelphia. Probably. But that's how it feels these days. Way too many cats in the air for this juggler.

6. I am thoroughly enjoying the British reaction to der Sturmtrumper's current visit. Nobody does cold-ass snark like the British.

7. Definitely congrats. Lauren got her Orchestra letter, her Academic letter, and a whole pile of nice things said. Now to get her school jacket over the Emporium for to have all those letters sewn on.

8. Yes. The desk. There will be songs sung, and poems recited, and ceremonies held, and small ceramic souvenir desks sold, and trading cards traded, and so on. Search & Rescue is probably not a bad idea, though.

9. Mostly it's a product of having entirely too much to do so you can ignore the bits you don't like and still work on other required bits, which come to think of it is both a defining feature and a bug, I suppose.

10. I think we'll talk about him anyway, even now that he's gone.

I first ran into him on a later SNL - early 80s, I think. My dad (who had two positions, vertical and asleep) woke up on the sofa while my brother and I were watching, and we all agreed that this was a talent. And a few months later we saw him live, opening for George Carlin. That was a night to remember.