Our Trip to Europe: We Come Home

All good things must come to an end, and so it was with our trip to Europe.  It was tempting to stay there, for any number of reasons, but the cats would miss us and besides, that kind of thing requires more planning than we’d given it.  So it was time to go home.

There was a bit of uncomfortable math about that, though.

We looked at our departure time.  Through some alchemy of internet wizarding skills Kim had managed to get us all on the same flight back to the US, but it left Heathrow in the morning.  Not excessively early, but early enough that it didn’t qualify as mid-morning, let alone late-morning.  Back home we’re usually heading toward Local Businessman High at that hour.

We looked at the recommended check-in time, which was some hours prior to our departure time.

We looked at the rental car, which would have to be returned, inspected, and approved before we could be shuttled over to the terminal to begin the check-in process.

We looked at the time it would take to get from Point A (defined as “Richard’s house”) to Point B (defined as “Heathrow Airport”) through a host of Point C’s (defined as “places where any random idiot could have an accident or otherwise keep us from arriving on time”).

And when we added all that up, we got a number describing the hours we would have from the time we returned to Richard’s house after the circus to the time that we would have to leave it again, a number that was disturbingly small.

We rechecked our math.

It came out the same.

We got back from the circus a bit after 11pm, British time.  We were on the road to the airport at 4am.  We said our goodbyes – Richard and Ginny saw us off in the morning, Magnus said goodbye as we went to sleep – and headed out the door.  It’s still dark at that hour, but on the plus side there’s not much traffic.

We arrived at the rental car return without much issue, though there are a few turns at the actual airport that really could have been better marked.  Kim was very sorry to see the car go, to be honest.  She’d grown fond of it. 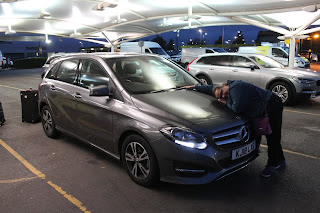 We took the shuttle to our terminal and discovered that we hadn’t actually qualified for any checked bags.  Fortunately there are problems that can be solved by throwing money at them – really, that’s what money is for, after all – and after an appropriate donation to the Airline Baggage Support Fund we were on our way.  We still had a few British pounds to spend down and we figured we’d get through security first, then find our gate and engage in some commerce aimed at procuring breakfast because seriously nobody wants to eat at 3:30am when you’re getting ready to drive.

In almost any other airport, this would have been a perfectly plausible plan.  Heathrow, like all of the European airports we visited on this trip, funnels you through a giant mall full of places eager to provide such services, so we figured it would be plausible here too.

Thus we were dismayed to discover that Heathrow has an entire second security process at the gate.  You think you’re done after the first time, but no!  You’re not!  You have to stand in a line that moves at a surprisingly glacial pace for something that only has to handle one flight’s worth of passengers, go through the entire security procedure again, and then go into a walled-off gate area that has exactly two vending machines in it, one of which sells Coke and the other sells potato chips (“crisps,” I suppose, but not really breakfast food either way).  If you leave you either have to go through the entire process again or check in with one of the gate workers as you walk out and let them handle it when you return.  So breakfast got a bit short-circuited, though not entirely.  Some of us did make use of the gate worker trick. I have a fair number of British pounds still, however.  I can’t say I’m sad about that – they’re interesting coins – but you know.  I could have parted with a few of them without grief, anyway.

The flight left on time and we settled in – Tabitha, Lauren and I together on the right side of the plane, Kim a few rows back in the middle.  It was a long and uneventful flight, which is what you want.  Certain things should be boring.  Healthcare, politics, and international travel are high up on that list.  Our plane had the same techno-features that the one from Chicago to London did and we made good use of them.  I watched a movie (Isle of Dogs – an animated movie but not a children’s movie, so be forewarned, though interesting enough to keep my attention all the way through).  I played innumerable games of computerized hangman.  Lauren and I played Battleship.  It passed the time.

We arrived at O’Hare in the late morning, Chicago time.  That’s what happens when you fly west – time seems to move very slowly, but it’s just the time zones.  We found our bag and made our way through Customs – a much more technological process than it was the last time we made this journey, six years ago, since it meant scanning our passports at a kiosk and then getting in line to present the resulting ticket to an agent who looked us over, asked a few perfunctory questions, took the tickets (No Passport Stamp For You!) and shooed us on our way.

Driving home was only vaguely strange, on the right-hand side of the highway.

And then we were back.

It was a great trip.  We saw a lot of really interesting things, did a few more, and – most importantly – were lucky enough to spend some time with far-flung friends.

Again, to Fran, Roeland, Veerle, Lien, and Niels in Belgium; to Mats, Sara, Maria, David, and Helena in Sweden; and to Richard, Magnus, and Ginny in the UK, we say thank you.

It’s your turn to visit now, and we look forward to having you with us whenever you can make it out this way!
Posted by David at 7:28 PM