Two of them.  They’re named Drake and Josh, because of course they are.

Well, they’re not really her pigs.  If you want to be fastidious about it (odd when talking about pigs), she’s borrowing pigs now.  We don’t actually have pigs.  I draw the line at pigs.  We’ve got rabbits, chickens, turkeys, cats, and the occasional rodent that the cats don’t seem interested in eradicating and why we feed them at all is an interesting question, and that’s more than enough really.  Pigs are big, powerful, odiferous animals who don’t really have much in the way of fashion sense or manners, and they’re best left in other people’s care, I think.

Lauren also has friends who are old enough to drive, one of whom is also interested in pigs.  So every few days Lauren and her friend drive out to Andy’s barn and take care of their pigs. 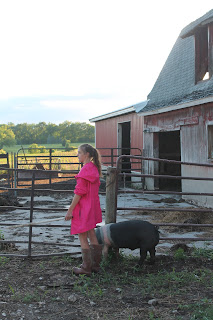 Naturally this is a 4H thing.  Anytime there is something vaguely ridiculous and unintentionally humorous it’s probably 4H.  That’s how we ended up with turkeys, after all.  4H is good that way – it stretches you.

The deal is that Lauren and her friend will do the showmanship part of the Swine event – walk them into the ring and make them do whatever it is you have pigs do before an audience that wants to buy them and eat them – and then whatever money that is made from their sale goes to Andy.  This sounds like a fair trade, really, especially when you throw in the fact that Andy’s taking care of all pig-related transportation.

I’ve never actually met Andy.  I’ve been in his barn, but that’s apparently a different level of intimacy among those who herd swine.  I’m a city boy.  I’m new to this.

I’m not really sure why Lauren wanted to work with pigs this year.  Maybe it’s just the next step up from poultry.  Every couple of years her Fair animals get larger by an order of magnitude – from chickens (3.5lb) to turkeys (35lb) to pigs (who knows – 350lb isn’t out the question), and the math just works that way.  Or maybe she likes pigs.  It could also be that that once you graduate to livestock the size of swine you get to sleep over at the Fair, which is just the most perfect place in the world according to Lauren.

Can’t fault her for pursuing her goals.

Kim and I went out there one night last week.  Kim understands pigs, having grown up in a fairly rural area.  Her brother Geoff had one of his own, once.  So she and Lauren took Drake and Josh out for a walk while I trailed behind. 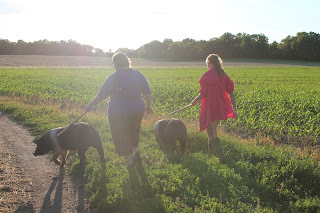 Because the thing is, pigs are intelligent.  They’re not like turkeys, who have negative IQs and who are often flummoxed by complicated ideas like “outside.”  Pigs have been known to trade stocks and run call centers.  On the internet, nobody knows you’re a pig until you tell them.  So while the pigs go along with this herding and thwacking about, I rather suspect that at some point – probably while they are in the ring with the audience that wants to eat them – there will be shenanigans.

And won’t that be a time?

But in the meantime, Lauren and her pigs spend a few evenings here and there out in the fading summer sun, and it is a lovely thing. 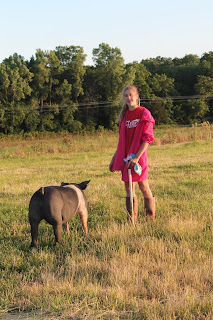 Alright, it’s been more than a week - I think I can do this with a proper level of civility.

First off my spell checker thinks you don’t know how to spell. My ‘puter’s dictionary thinks Lauren’s borrowed swine are only a variant:

Were they actual, real swine they would instead be:

odoriferous |ˌōdəˈrifərəs|
adjective
having or giving off a smell, especially an unpleasant or distinctive one: spicily concocted with odoriferous herbs | an odoriferous pile of fish remains.

And I actually do believe that the fish remains would stinky smelly better.

(Although, I have to admit, if somewhat grudgingly, not as stinky smelly as the cat box. And pigs are a helluva lot easier to herd.)

“On the internet, nobody knows you’re a pig until you tell them.”

[Looks around the office. Damn, cover is blown - he knows. Wait - how could he know? Haven’t told him yet … ]

On the internet, not many people know anything even if you tell them, I've found. That's why we who do need to stick together.

I'll be back posting soon - we've had friends visiting for a couple of weeks and it's been busy.

Sure ... Whatever you say. Any port (excuse) in a storm (or heatwave).

Speaking of sticking, 109º F when unloading my truck today. Before Noon.

If you've got any sense at all, you'll find a large bathtub, fill it with ice, and won't come up 'til fall. (Least, that's my plan as far as I've thunk it through.

You know, all that tells me is that I haven't any sense. Sigh. 109F is not a temperature fit for humans. I'm quite happy at about half that. Only four more months until civilized weather.

Also, I need to check the comments more often to jailbreak ones like yours here that come in after the deadline for commenting has past. Sorry about that! On the other hand, I deleted a couple of spam comments before publishing yours, which is a good reminder of why I set that system up that way.