The problem with spring in Wisconsin is that it is both brief and reversible.

We actually had spring back in February.  I believe it was a Thursday.  It got all the way up to about 75F.  The skies were blue, the flowers bloomed, and for a brief shining moment we could all forget the concerns of the larger world as we stared forlornly at those flowers and thought, “You poor bastards have no idea what’s about to hit you, do you?”  And of course they didn’t.  They were flowers, after all.  Flowers are not known for their long-range planning abilities.

So it should not have come as any great surprise last week when Lauren’s first couple of track meets were held in grey, drizzly, windy conditions on two consecutive days, the first of which saw a high of 62F while the second made those of us in the stands recall the first day as a halcyon time of warmth and comfort.

It may have actually snowed.  After a while you just ignore it, because really what are you going to do about it anyway?

This is Lauren’s third year on the Mighty Clever Guy Middle School track team, and she seems to enjoy it.  Every year they go out and practice, and then the meets start.  Sometimes the meets are quick, and sometimes they border on eternity.  I’m not sure how this distinction is made in the planning stages.  I only know what it seems like from the outside.

Last week they got all of the middle schools here in Our Little Town together and had the girls do track on Wednesday and field on Thursday, while the boys did it the other way around.  This did not especially please Lauren, who enjoys the field events much more than actually running around a track, and I can understand that.

But on Wednesday she ran the 200 and then the second leg of a 4x200, and she did a respectable job.  MCGMS is not generally reckoned as the fleetest of foot here in Our Little Town, but they held their own and that's all you can ask of people, I think. 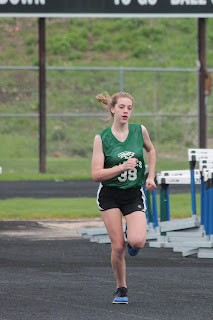 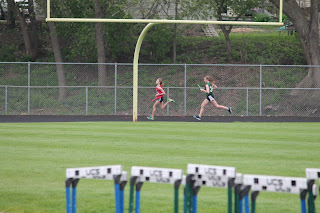 One thing I have never understood is why they insist on calling the 4x200 the 800-meter-relay here.  Yes, I get it, the total distance traveled is 800 meters.  But when you say “800-meter-relay” all I think of is an unspecified number of runners traveling 800 meters apiece.  Is this a midwestern thing?  Have they changed the nomenclature since I was a lad and ran the 4x200?  Maybe.

Thursday, while significantly colder, was more Lauren’s speed, as she got to do the high jump and triple jump.  High jump is her event, and to be honest she really does have very good form. 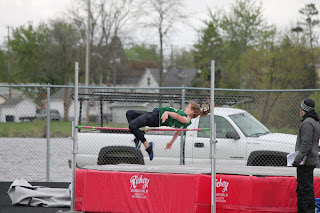 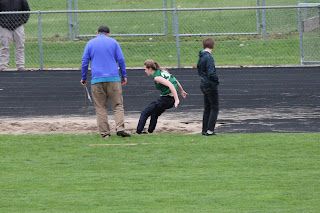 She won both of her field events, which was a lovely thing.


Congratulations, Lauren!  I’m proud of you.
Posted by David at 9:32 PM