Life and Nothing But

When I was an undergrad, I took a psychology class called “Misfortune and Punishment.”

It was a fascinating class, really.  How do people react to negative events?  Why?  How do you distinguish between misfortune – bad things that you don’t deserve – and punishment, which is just bad things that you do deserve?  What happens when people conflate those two things?  What makes them do that?  For a grim subject it was a surprisingly fun semester in many ways.

Not all of them.  But many.

At one point during the many classes where we were focusing on death and dying, the professor – a tall, thin man with an Amish beard and a sense of humor that would need to be thoroughly irrigated just to get back up to merely “dry” – turned to us and said, “The fact that you are going to die doesn’t mean that you have to spend all your time dying along the way.”

This is a valuable lesson.  It is okay, even in the direst of circumstances, to look around you and find joy.

It’s good to remember that, these days.

So even as my country descends into howling madness, I will find what simple joys there are.  I will write about them.  And I will be happy in them.

And in an oddly fitting sort of way, our current little bit of joy is the fact that there is so much more life here than before.

Granted, it’s all livestock, really.  But still.  Life is to be celebrated.

On Sunday I was out grocery shopping, as I usually do on weekends.  I like food, and it’s a great stress reliever for me to be surrounded by it, even if I am accompanied by an army of nearsighted cart-jockeys all fighting for position in the produce aisle.  I got home and discovered that this year’s chicken replenishment was starting earlier than I had thought it would.

You have to get new chickens every year for the 4H.  Normally we have catalogues we can order from and a friend who breeds them where we can get more and a fur-and-feather swap where there are still more, but somehow Lauren got word of a guy with salmon faverolles to sell.  So I put away the groceries and we headed out.

Now my living room once again smells like a barn and sounds like my grandfather’s Christmas tree.  But this breed is pretty docile, and they’re good layers.  So, win all around. 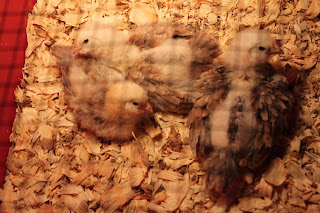 They’re not actually as cross as they look.  Really.

The other side of this was more long-term.

Milkshake and Maybelline are both purebred Dwarf Hotot bunnies, and Lauren has long dreamed of breeding them.  And certainly Milkshake has done so as well.

So a few weeks ago, we let them have some quality time together.

It has to be said that Milkshake, having lost an eye a couple of years ago, is a little short in the depth-perception department and perhaps a few other visual areas as well, and I hope that Maybelline’s nose recovered quickly after that.  But we eventually got him turned around and, well, romance happened.

Maybelline had her babies today.

We’re not sure how many of them there are, as they are buried in the nesting box under thick layers of wood chips and rabbit fur, but Lauren did fish one of them out and spy another, so we know there are at least two.  They’re odd looking things, but eventually there will be more cute little bunnies that we can sell.  Maybe they’ll be Fair-worthy, and we can have more Dwarf Hotots to keep Maybelline company there. 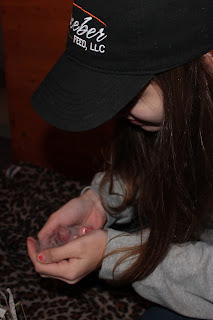 So life goes on, even in the face of madness, and that is a good thing after all.
Posted by David at 10:14 PM