Wrapping Up the Fair

The animals are back in their pens, barns, or wherever they were prior to this, with the exception of poor Momo.  Although turkeys are not known for their longevity after the Fair, so perhaps it all comes out in the wash in the end.  The projects have been removed from the walls and returned to their rightful owners.  We have Lauren’s photos, Tabitha’s art, and a pile of things that belong to other 4Hers who were unable to pick them up in the crush of load out.  We have had our first actual meal in days, in our own home, and nothing was onna stick.  It’s been a time.

But there are still a few stories left to tell, and rather than let them fade away in the grey fog of my mind I will write them down here to remember.

Friday Lauren and I got there early, as was our habit.  She took care of her animals and then we had breakfast and wandered around together until I had to leave for Tabitha’s concert.  Along the way we found the local credit union’s tent, where they had a photobooth.

Seriously, how could we resist?

That evening our friends Heidi and Travis came down and we showed them around a bit, though one of the things about living in a small town is that everywhere you turn you run into people you know so the tour got delayed a few times.  But that’s a nice problem to have, really.

Everyone who exhibits in the Rabbits, Goats, and Poultry areas is entitled to sell one animal to the highest bidder.  The Dairy, Beef, Sheep, and Swine have their own sales.  The sale takes place in a big open square room with bleachers on three sides.  The crowd filters in over the course of the morning, registering as bidders and picking up the little booklet they give you with all the kids and what they’re selling.  Up front is the auctioneer’s booth, and a raised platform for the kids to walk across so you can see them.  There are also tables for the rabbits. 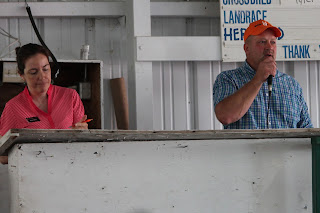 I found a nice seat where I could see everything and settled in to wait.

The rabbits came first.  They get carried in by the kids and placed on the tables and the bidding starts at $100 because it’s a fundraiser and it’s for the kids.  You place your bids and if you win you get to keep the animal and the 4Her gets the money.  Or you can donate it back (still paying your bid) and they auction it off again, this time to benefit the scholarship fund.  It’s a nice system, though when a single rabbit can fetch $1300 you know that there is nothing particularly responsive to supply and demand going on here.

The rabbits paraded by, each bid heralded by the YAAA! Man. 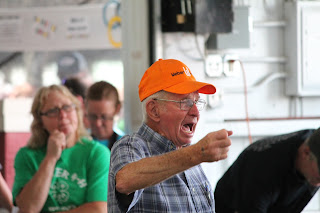 Then came the goats.  I bought one of those, though I donated it back for the scholarship fund because really, what am I going to do with a goat?  I’m glad the money is going to a good kid, though.  Pun fully intended.

Lauren was about halfway down the list for people selling turkeys.  She had a big poster with her, though it had a picture of last year’s Norman rather than this year’s Edmonton III.  We didn’t take as many photos of the turkeys this year, and there weren’t any good ones of Ed.  Most bronze tom turkeys look more or less the same, however, and Lauren did actually have much the same pose with Ed a few times that we could have taken pictures of, so there you have it.

She marched across the stage with her poster and eventually got $120 for her bird.  Not bad for a turkey. 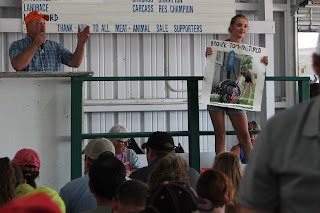 I left the sale right after, since I had to get all the way across the Fair to man the creampuff booth for a couple of hours, though I will admit I stopped at the local radio station’s booth to check on this year’s book giveaway.  They always have good books for free – whoever does their selection really does a nice job.  This year the prize was a stack of Christopher Moore books for the taking, even if I already had that one - I left them for others and thanked the radio folks for their books.

I have all of Christopher Moor's books.  If you haven’t read his books, you should correct that immediately.  They're funny, and that is something sore needed in this modern world.

I also had to walk past the GOP tent, which was notably more subdued than in recent years.  The Wisconsin GOP has been quite brusque these last few years about its conversion of a once-thriving democracy into a single-party dictatorship, but this year for some reason they were fairly quiet.  The place was festooned with signs, of course – that’s why they rent the space, and the Democrat tent had about the same number of signs touting candidates as well.  But there was something off about them.

Every time I walked past the GOP tent I would play the same little mental game: “Count the Trump signs.”  The answer was always “one” – a forlorn little blue sign about 12” x 20” tacked to a larger sign advertising the party in general that had the festive air of "contractual obligations" about it.  I suppose there’s a message there.

Sunday morning Lauren and I got to park inside the Fairgrounds, for we were Staff, at least for the morning.

There was a brief interlude of fog, which was kind of nice, and then it was on to the main event.  Or at least our main event. 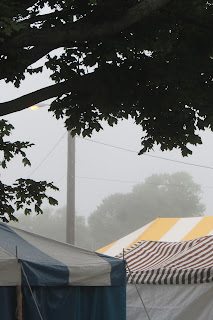 The Drama group from May was scheduled to put on one last performance – actually two last performances, back to back – on the little stage over by the art projects.  I built a door frame out of PVC to replace the one we had borrowed from the campus theater that had been built out of depleted uranium and grief, Kim corralled the actors and got them ready, and our friend Jon agreed to help us set up – particularly with the canvases, though that turned out to be simpler than I thought it would be since the people who owned the backdrop didn’t want us to use screws so we just draped it over and called it a day.

A surprising number of the cast members from May returned for this show, even coming to a couple of pickup rehearsals earlier in July.  And we got a few volunteers to do some tech work and introduce the performances.  The kids put on quite a show. 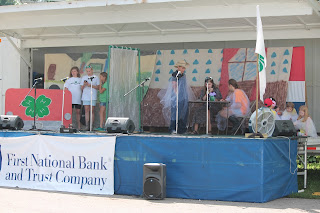 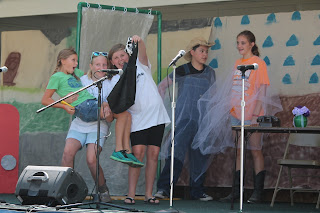 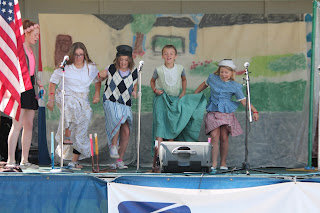 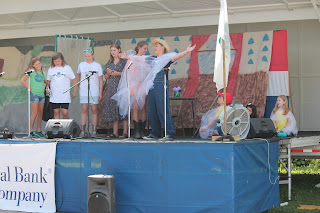 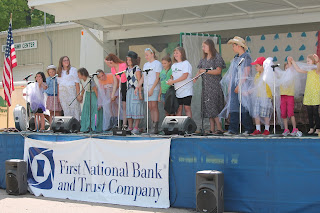 Load out was that night.  If you’ve never experienced load out at the Fair, just imagine a small farming town being informed that everything in it needs to be moved over the hill in less time than an American football game – “everything” being a fairly flexible word that includes an assortment of animals ranging from horses and steers to ducks and rabbits, as well as half a dozen buildings full of artwork, sewing projects, vegetables, and rockets, some of those projects being a dozen feet long.  Give everyone pickup trucks and let them drive in among the crowd while people are walking around with cages full of birds.  And do this at the end of a very long week.

Honestly, it’s a wonder it goes as smoothly as it did.

But it does go smoothly for all that.  Kim and I even had time to visit the photobooth ourselves.

Once the starting bell sounded at 7pm sharp, Kim and Tabitha took care of the rabbit and the projects.  Lauren and I got the poultry.  We had them packed into the minivan and on the road in 45 minutes, and in their pens dusted for critters in less than two hours.  It was a good Fair, and now it is memories.