Tales of the City, Part 1: Seeing the Sights in San Francisco

New York, New Orleans, and San Francisco all sit on American soil, of course.  Their residents pay taxes to the federal government and hold American passports.  But culturally, socially, and in many ways politically, they are their own thing.

The fact that they are all wonderful places to visit may or may not be connected to this.

We spent our Christmas in San Francisco, visiting Kim’s brother Geoff and his husband Dave.  They live in the Mission District, right in the thick of things as far as the city goes, and it had been a while since we’d been there.  But last month Kim and Geoff hit the magic half century mark, and so we decided that it would be a good time to get together.

San Francisco is a beautiful city, one pretty much designed for photographers.  The light comes in at interesting angles and qualities, the scenery is amazing, and there is a lot going on.  We tried to cover most of the city while we were there.

We started our first full day there by taking the BART down to the Exploratorium.  We took the BART a lot while we were there, which is always a great deal of fun for me.  I like cities and I like public transportation, because you get to see the city that way and you get to see the people of the city that way.  It sometimes amazes me that there is a subway system in a place as earthquake-prone as San Francisco, but there you have it.  If I’m on the BART when the Big One hits, I will probably never even know it. 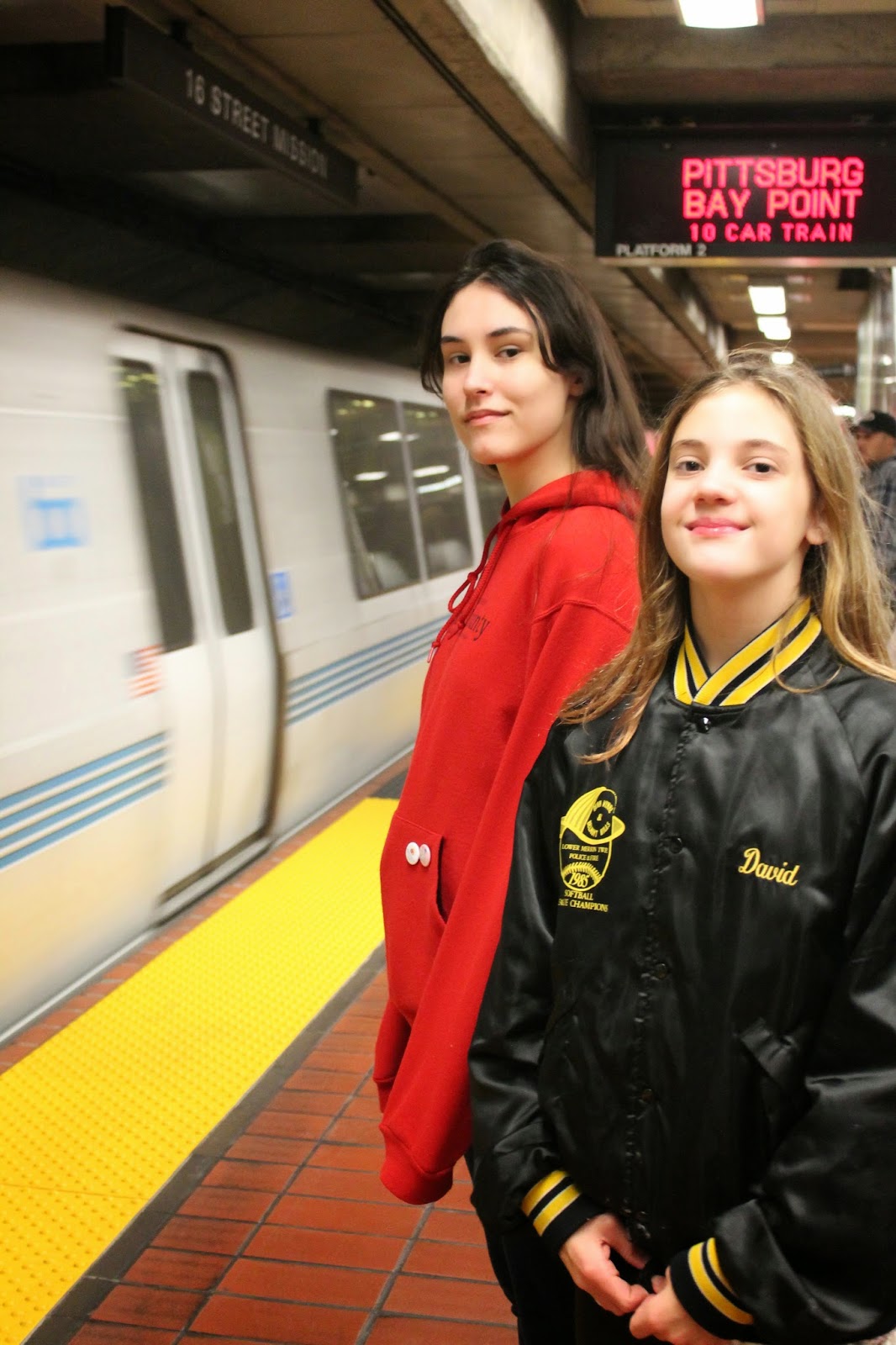 The BART drops you off near the Ferry Building, a lovely structure that is now the home of any number of shops selling artisanal foods and which is surrounded by a raft of crafters and farmer’s market tents.  So it took us a while to get to the Exploratorium, is what I’m saying here.  But it was a warm, sunny day – almost uncomfortably warm for people used to Wisconsin in December – so we took our time and eventually found our way there.

The Exploratorium is an intensely interactive science and technology museum that moved over to the waterfront since the last time we visited.  You can spend a lot of time there just messing around with things.  This is Lauren’s definition of an ideal museum, and it held up pretty well for the rest of us, I’d say. 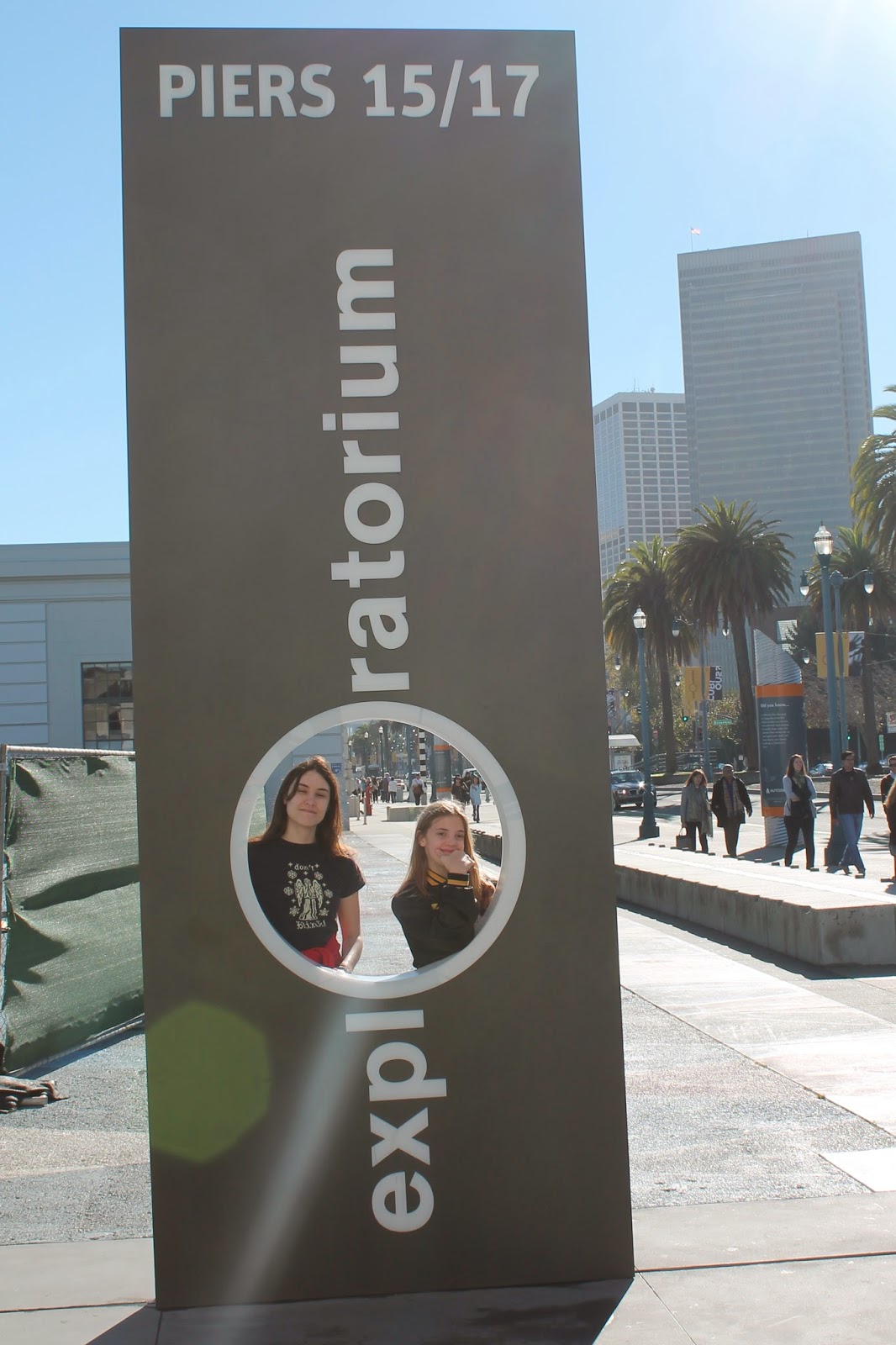 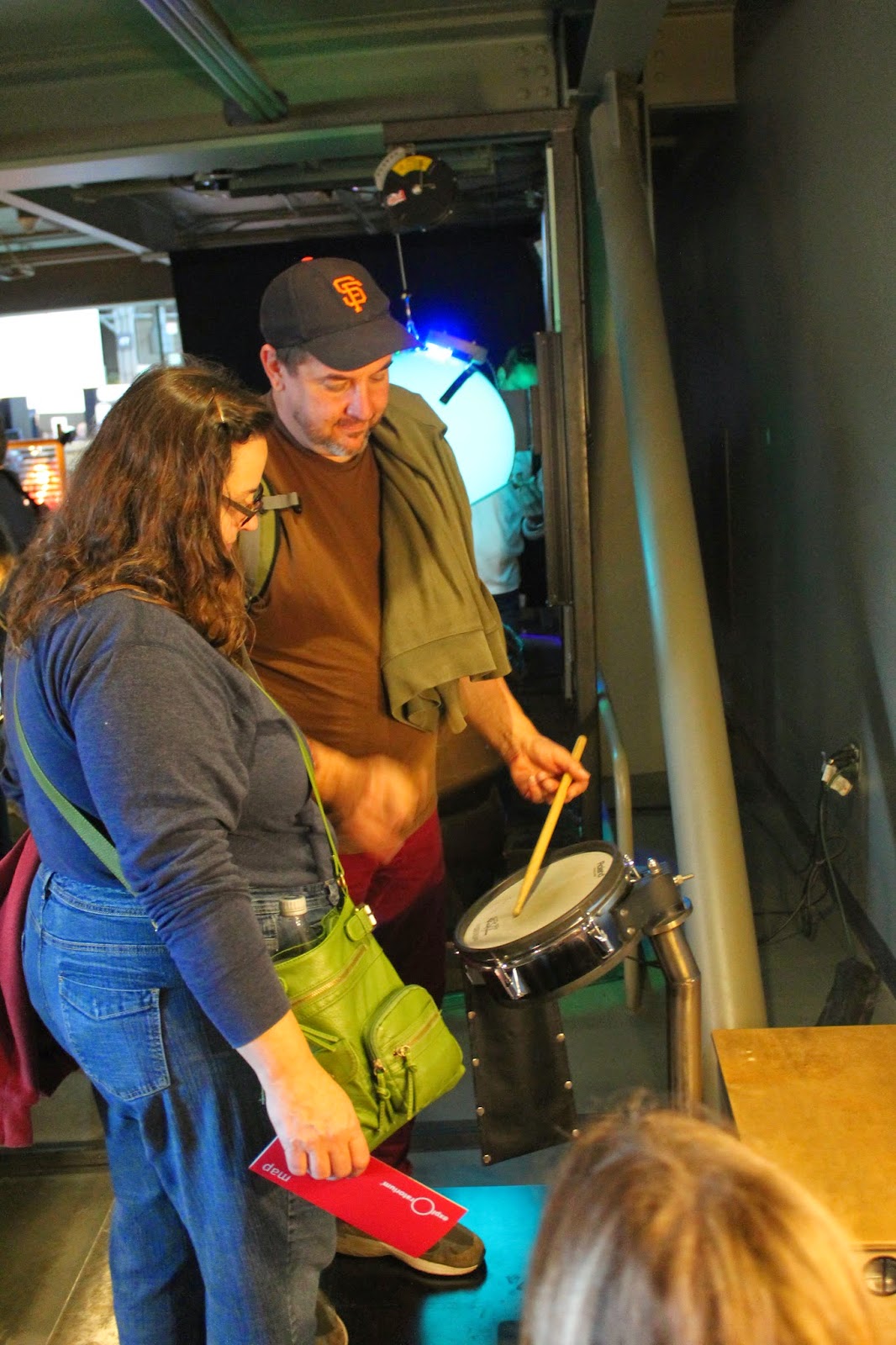 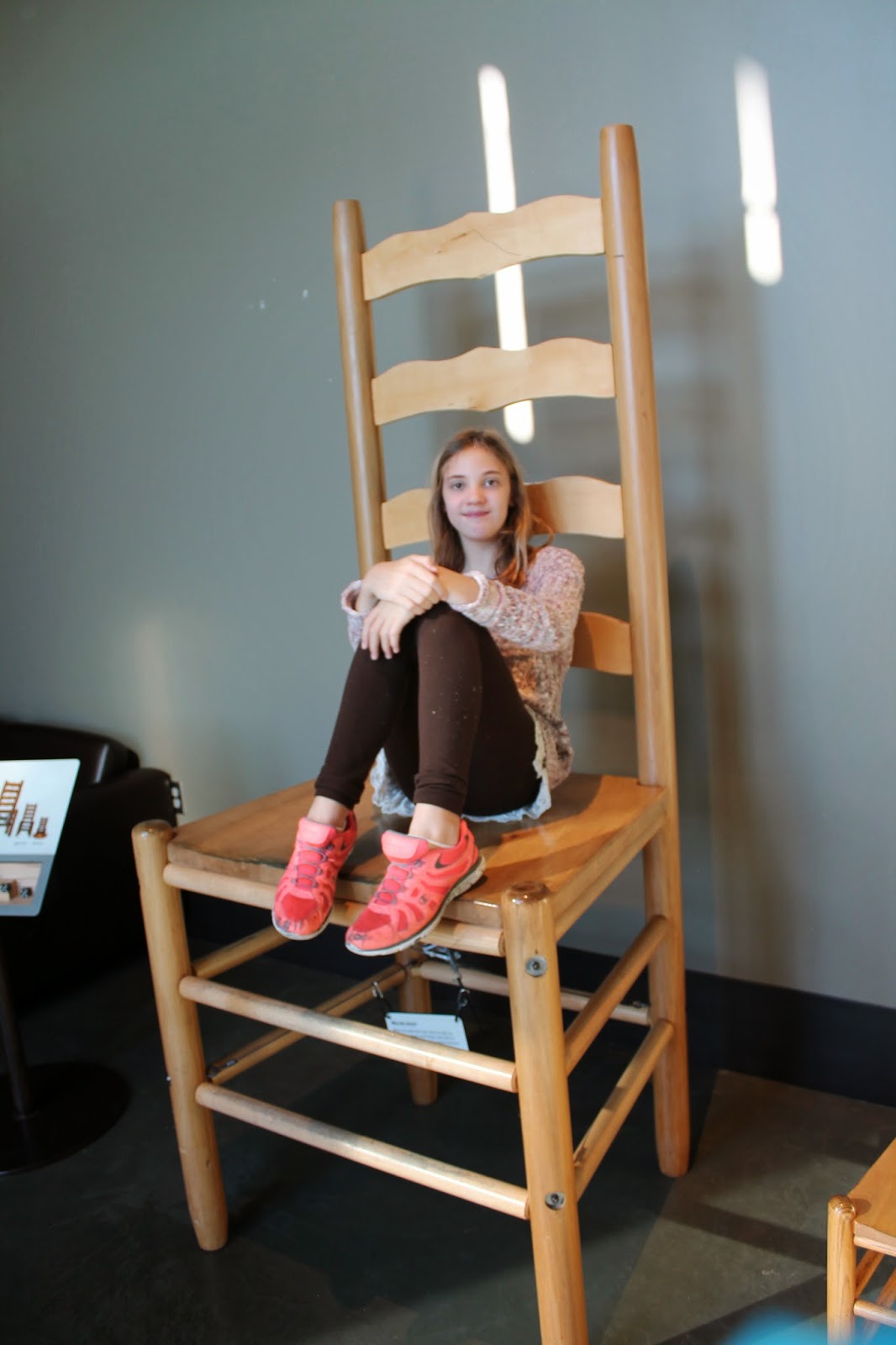 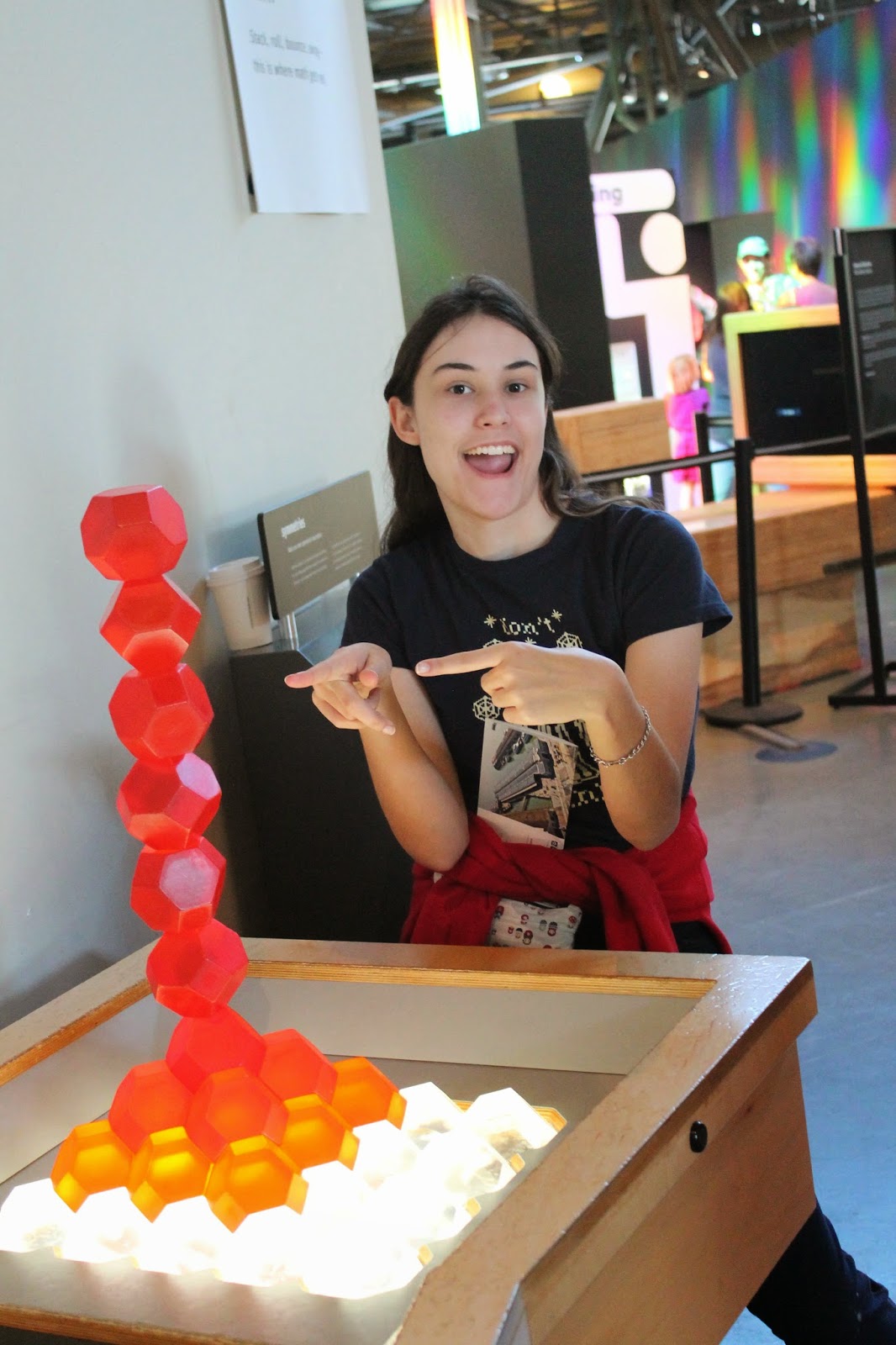 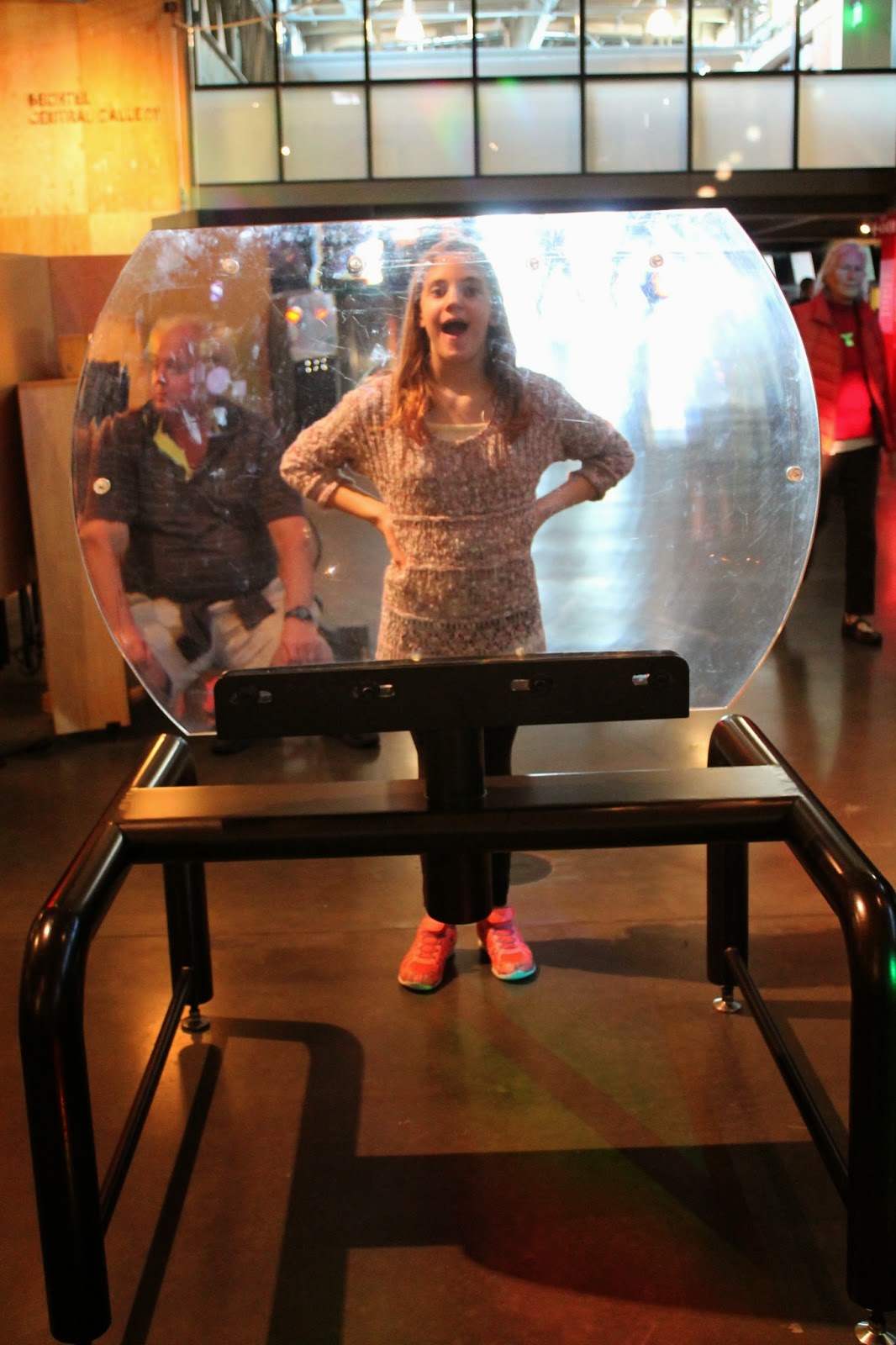 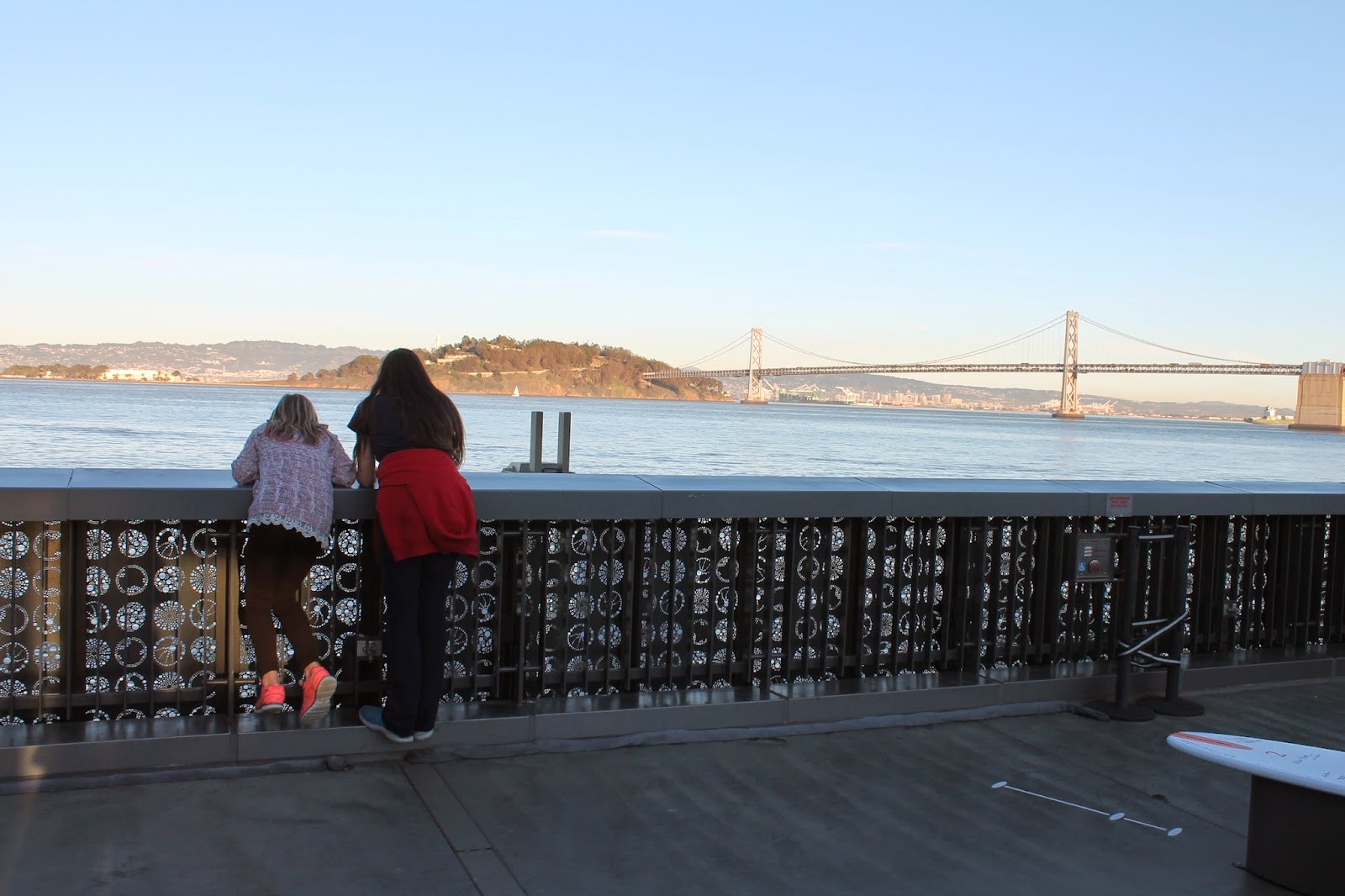 We took a break to have lunch at the Ferry Building, which is where I discovered that “artisanal” is a codeword for “tiny portions, artfully prepared.”  It felt like being in the old Louie Anderson routine about being on two diets because the first one didn’t give him enough food.  The food was tasty, granted, but given the amount of walking one does in San Francisco it was a bit disappointing that way.

The return to the museum more than made up for it, though – Tabitha and I spent a fair amount of time tracking the ships in the bay in real time on one of the displays – as did our subsequent walk down the waterfront to Pier 39, home of the giant Christmas tree 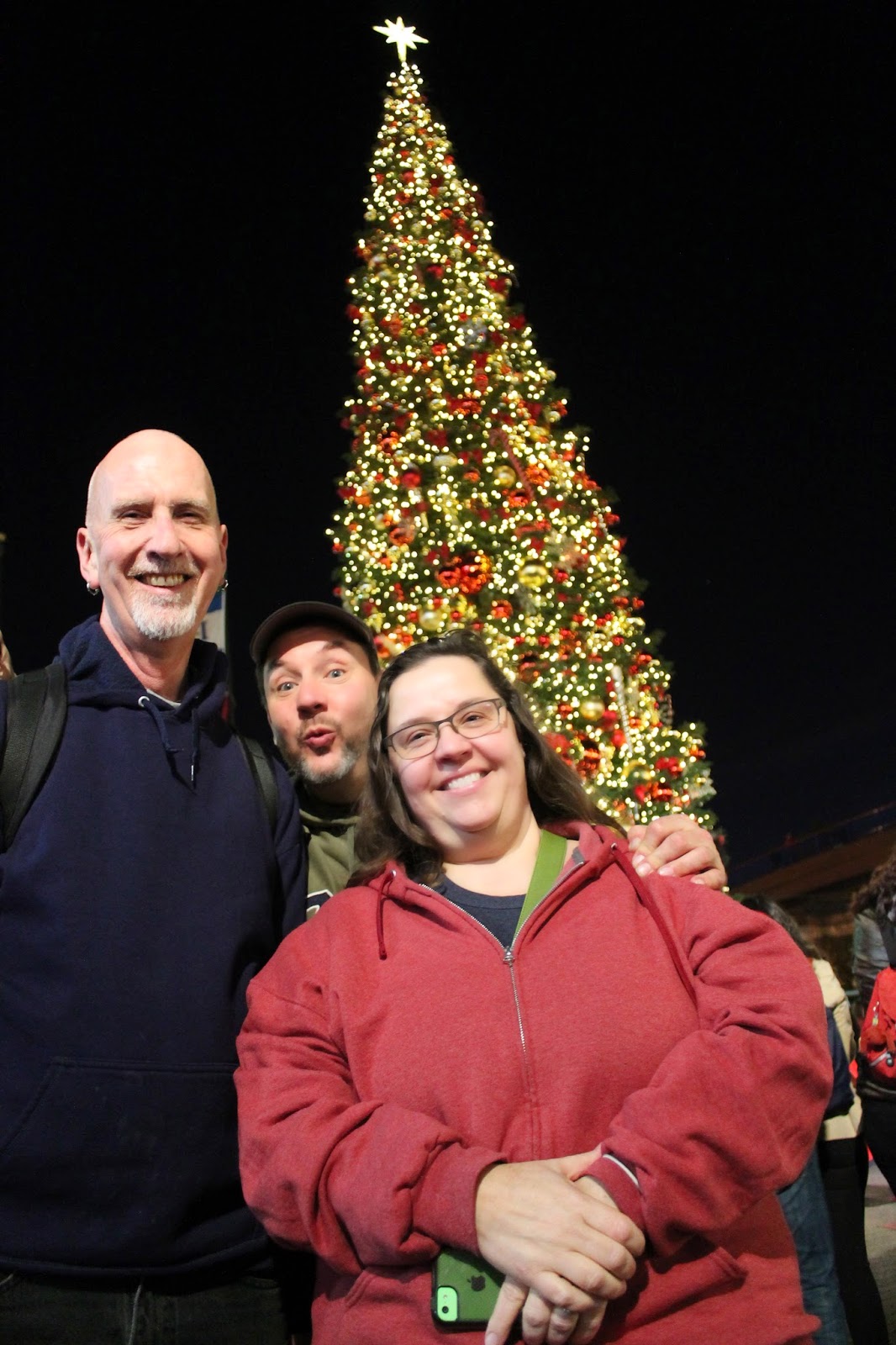 It also had quite possibly the best shop in the entire universe according to Lauren.  It’s called The Lefty Store, and it has everything a left-hander could possibly need – notebooks with the spiral binding on the right so lefties don’t get wire marks on their forearms, pens with little ledges for your hand so they don’t have to smear ink across the page, pencil sharpeners with the blades reversed to accommodate the leftie spin, can openers that lefties can use without contortion, and so on.  We cleaned the place out.  I had a long talk with the sales clerk about whether right-handers were even allowed to work there.  “Oh yes,” she said, “but they never last long.  None of this makes sense to them the way it does to us.”

On Christmas Eve we had breakfast at a lovely place called the Crepevine, which was for the moment uncrowded.  The time to go anywhere in San Francisco, we discovered, is Christmas Eve and Christmas Day.  There are no crowds, and parking is freely available.  If you’ve ever been to San Francisco, you will understand why this is such a big deal.  San Francisco is the original Place Where You Cannot Park, and for there to be readily available parking places is something of a Christmas miracle.  Really, there should have been organ music and choral hosannas. 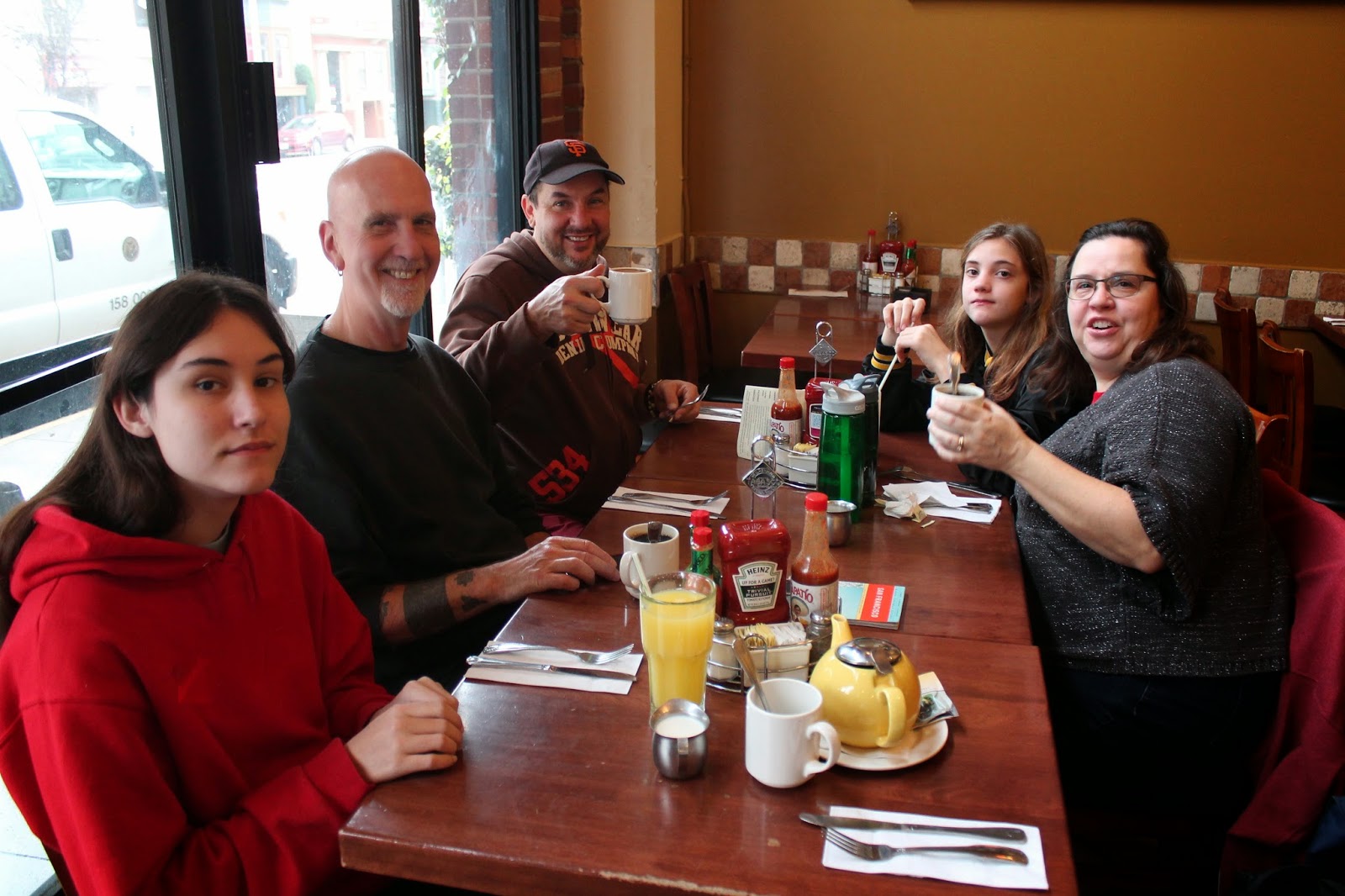 Not that we needed any parking.  We did a lot of walking in San Francisco.  It is an immensely walkable city, a rare and increasingly disappearing thing in this automotive nation of ours.  So when we left breakfast we simply headed toward the waterfront on foot.  You get to see a lot of things and make serendipitous discoveries along the way, such as the art supply store we ducked into for reasons that made sense at the time.  It was such a great place that we ended up going back before we left town just to get stuff we didn’t get the first time.  Because stuff.

We spent the rest of the morning at the Asian Art Museum, which Kim and Tabitha adored and which Lauren and I mostly walked through and entertained ourselves on our own.  There’s a lot of art there, most of which is extremely impressive, but I find my Philistine streak comes out fairly quickly in art museums.  Fortunately we split up so the enthusiasts could enjoy it while the skeptics could proceed at our own pace without feeling any pressure.  And so a good time was had by all.

Geoff left after the museum in order to go home and prepare Christmas Eve dinner, which will feature in a later post, so Dave led us on a merry trip through the downtown.

Our first stop was City Lights Books.  Back in the day this was where people like Jack Kerouac and Alan Ginsberg used to hang out and it still retains some of that feel.  But mostly it’s a cramped and lovely book shop stuffed to the gills with the kinds of books that you don’t often see at the Barnes & Noble in the mall.  The aisles are narrow, the shelves are tall, and if you slide past the registers there’s a staircase to more books in the basement.  It was a wonderful place.

First of all, there is amazing food.  We stopped in a Vietnamese place, actually, since Vietnamese cooking doesn’t have the nuts that Chinese cooking does, and on that grey, rainy day the immense bowls of chicken pho made us warm and cozy.

Second, there is just the most amazing array of commerce, humanity, and general bustle in San Francisco’s Chinatown.  Dave led us up a busy street full of stores where nothing – not even the prices – was written in English, and we had a grand time poking into the various things for sale.  Kim and Lauren did most of the exploring, emerging victorious with bracelets and other goodies, but I also found a few shops with stuff I enjoyed and even Tabitha got into it now and then. 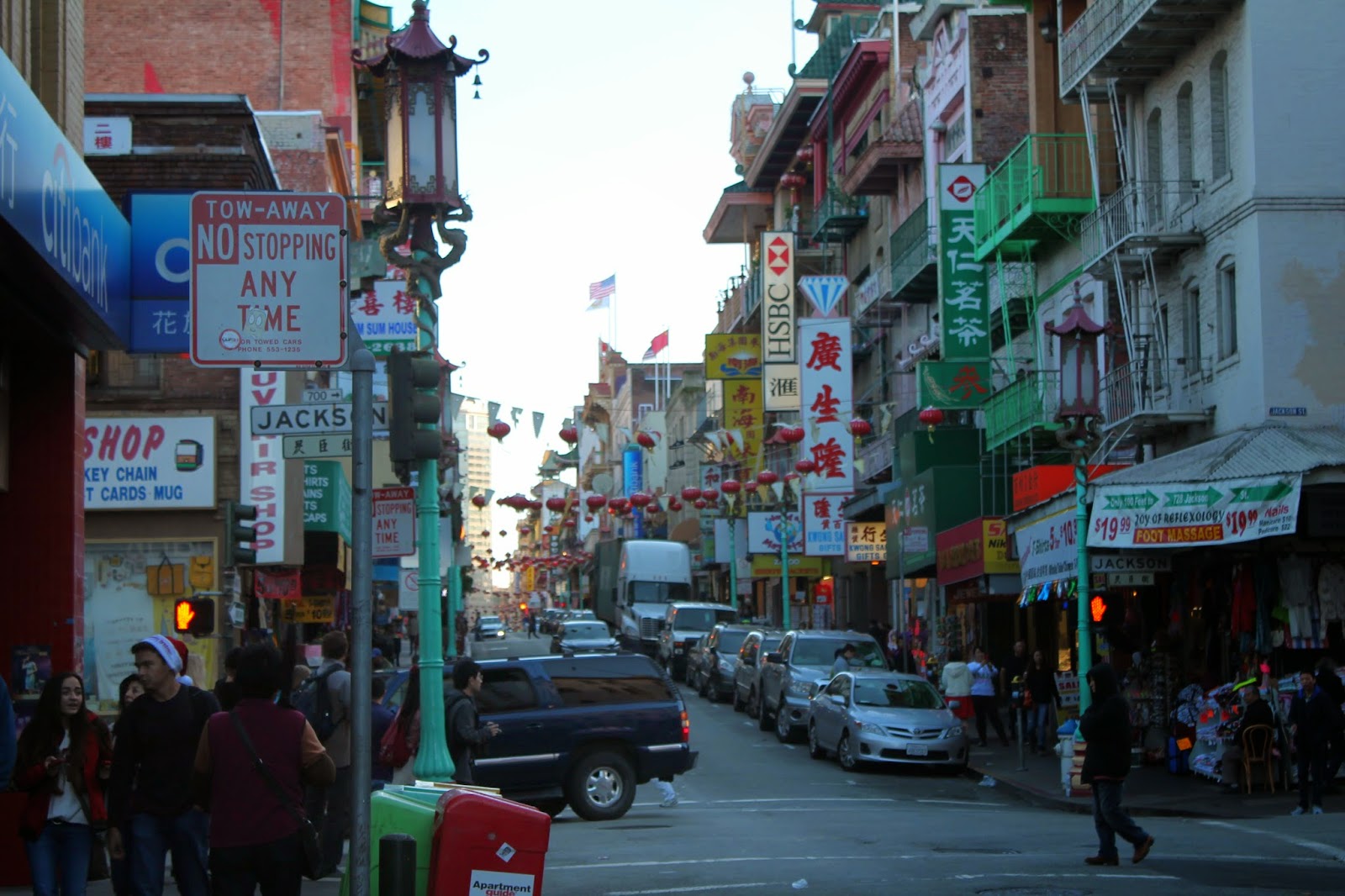 Our other big excursion into the city was on Friday, when we went down to the Sharon Arts Studio to see Geoff’s workplace.  He’s been doing a lot of ceramics recently, many of which are displayed throughout the apartment, and even though the studio was closed we could still peak inside.

After a nice walk through the surrounding park – including the AIDS Memorial Grove, which was peaceful and lovely – we headed over to Crissy Field and Fort Point.

We were driving, since there is no convenient BART link between all of the places we’d hoped to go and it was too far to walk, and Dave and Geoff decided to take the more scenic route along the Pacific Ocean.  And it was indeed scenic – gorgeous, in fact.  We got to see both the Pacific and the Atlantic in less than six months, which is just the kind of nerdy accomplishment that makes me smile.  But it was a lovely day, the day after Christmas, and everyone in San Francisco had decided that they needed to be in Marin County so the Golden Gate Bridge going north was jammed all the way back to the access roads along the Pacific.

But the scenery was, as noted, beautiful (it’s not like being stuck in traffic in Gary, Indiana, which we’ve also done), and Tabitha and Lauren had a great deal of fun signing back and forth between the two cars as we inched our way up and over the hill.  You make the best of things, and they turn out just fine.

Crissy Field is a lovely little patch of greenery under and to the bay side of the Golden Gate Bridge.  We met some friends there (more on the meeting of friends in a future post) and had a nice picnic lunch before heading up to Fort Point. 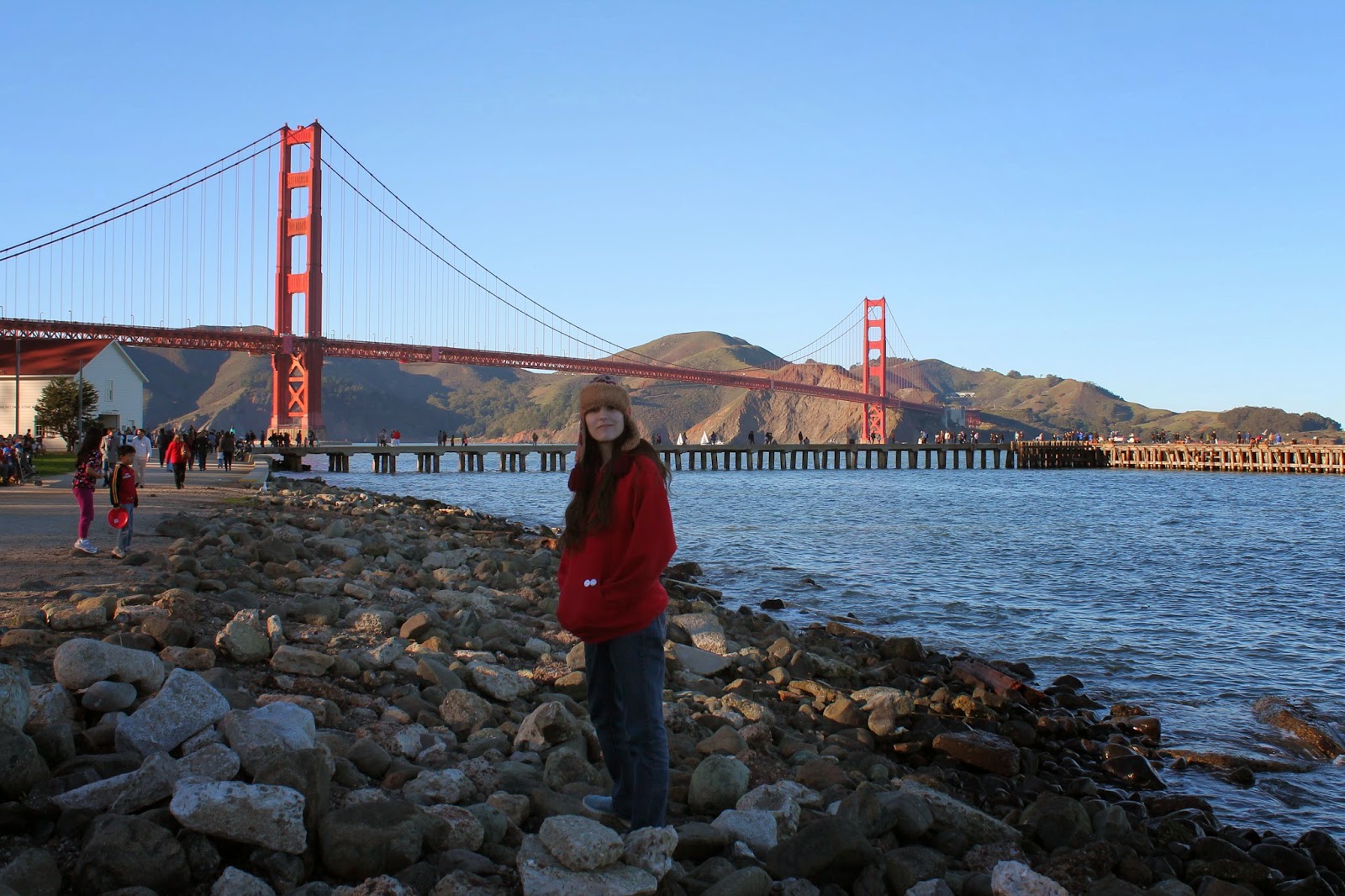 Fort Point is the old military post directly underneath the bridge, and it is a fascinating place to wander about.  It’s a ring of brick structure surrounding an open 3-story courtyard, and you can go pretty much anywhere you want.  It’s a great place to take pictures. 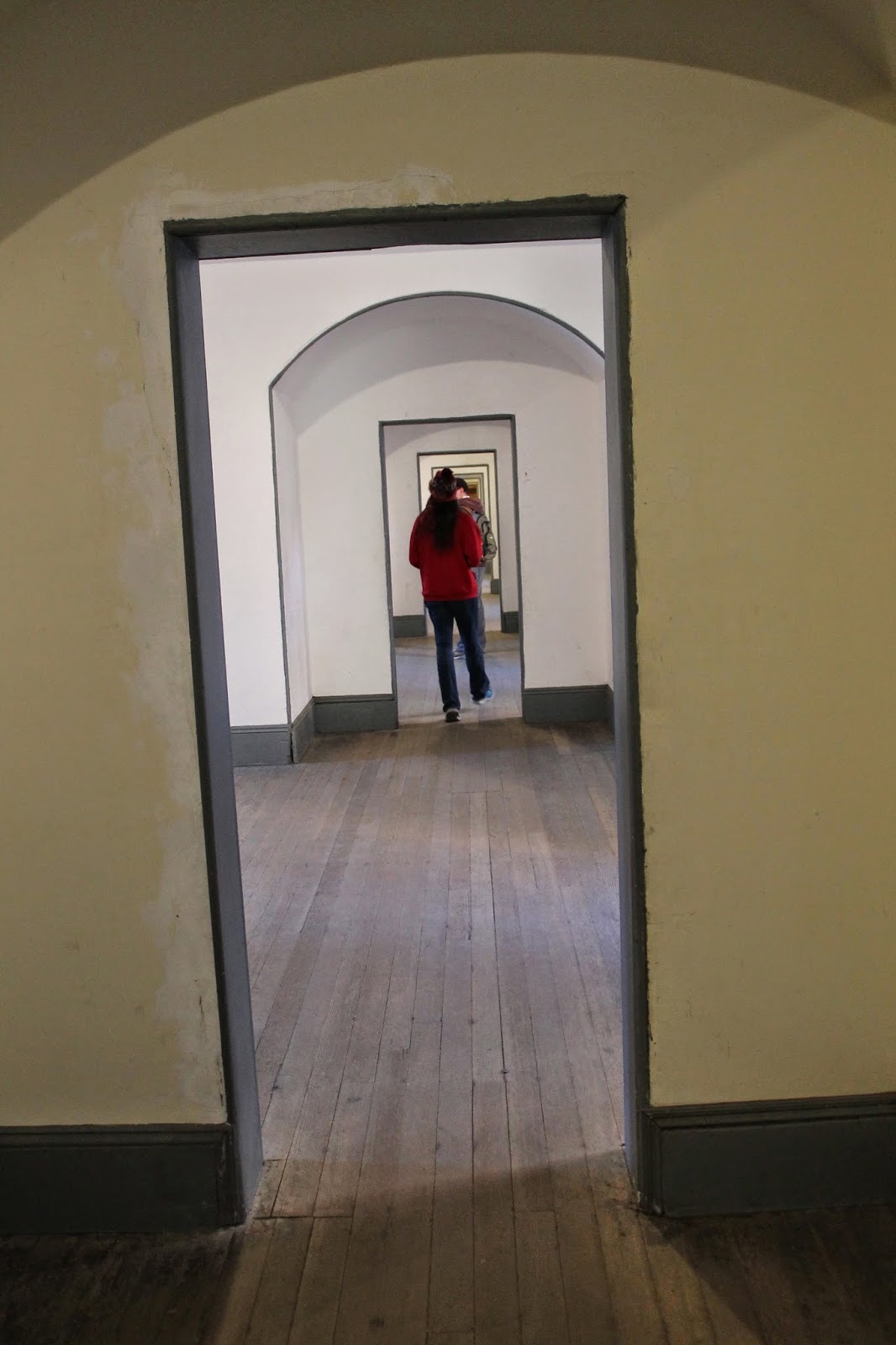 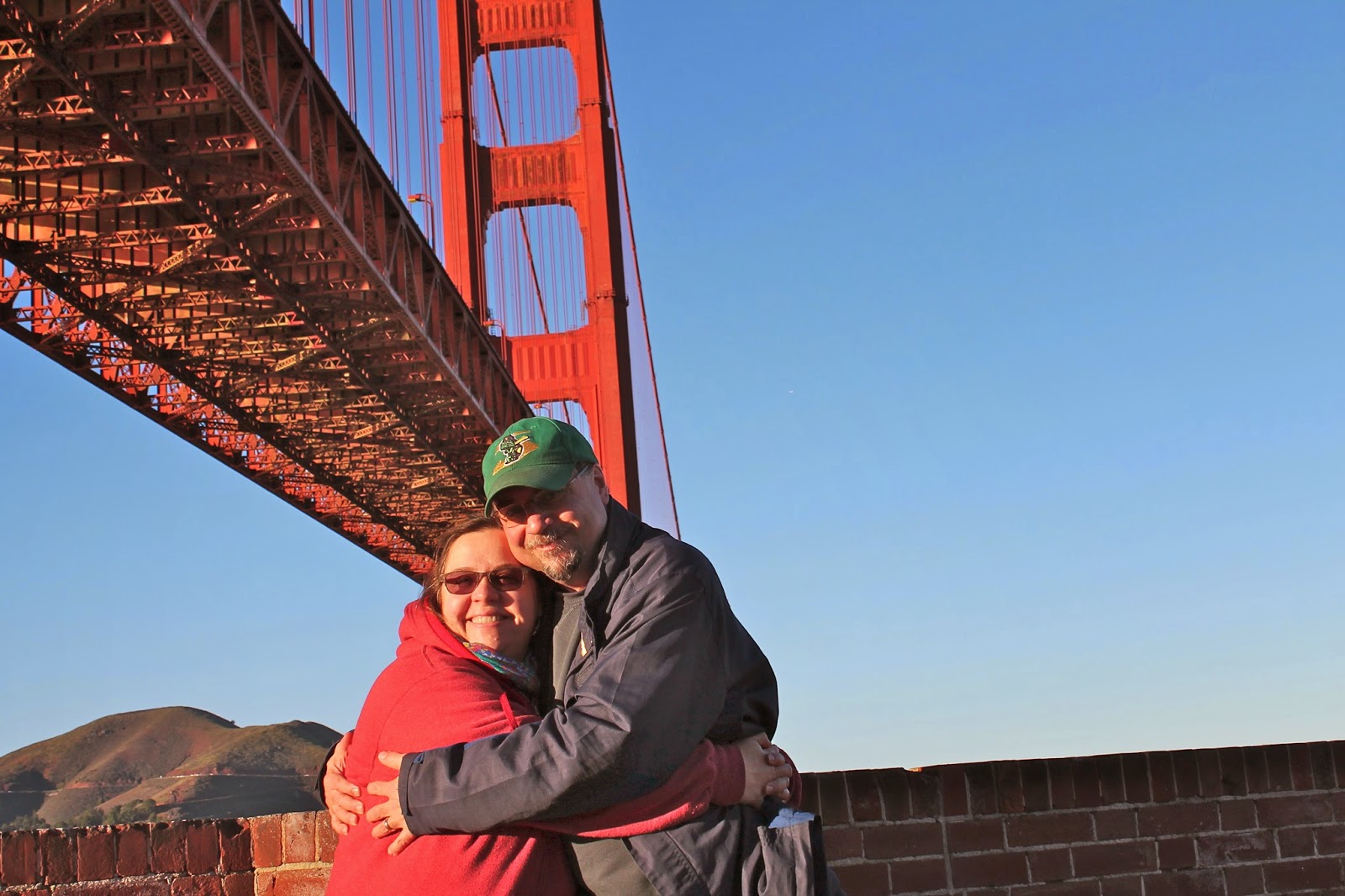 Lauren and Tabitha spent much of the time taking panoramic shots on Kim’s iPhone and cracking themselves up thereby, and if that isn’t what that feature is there to achieve then I don’t know why they even bothered to invent it. 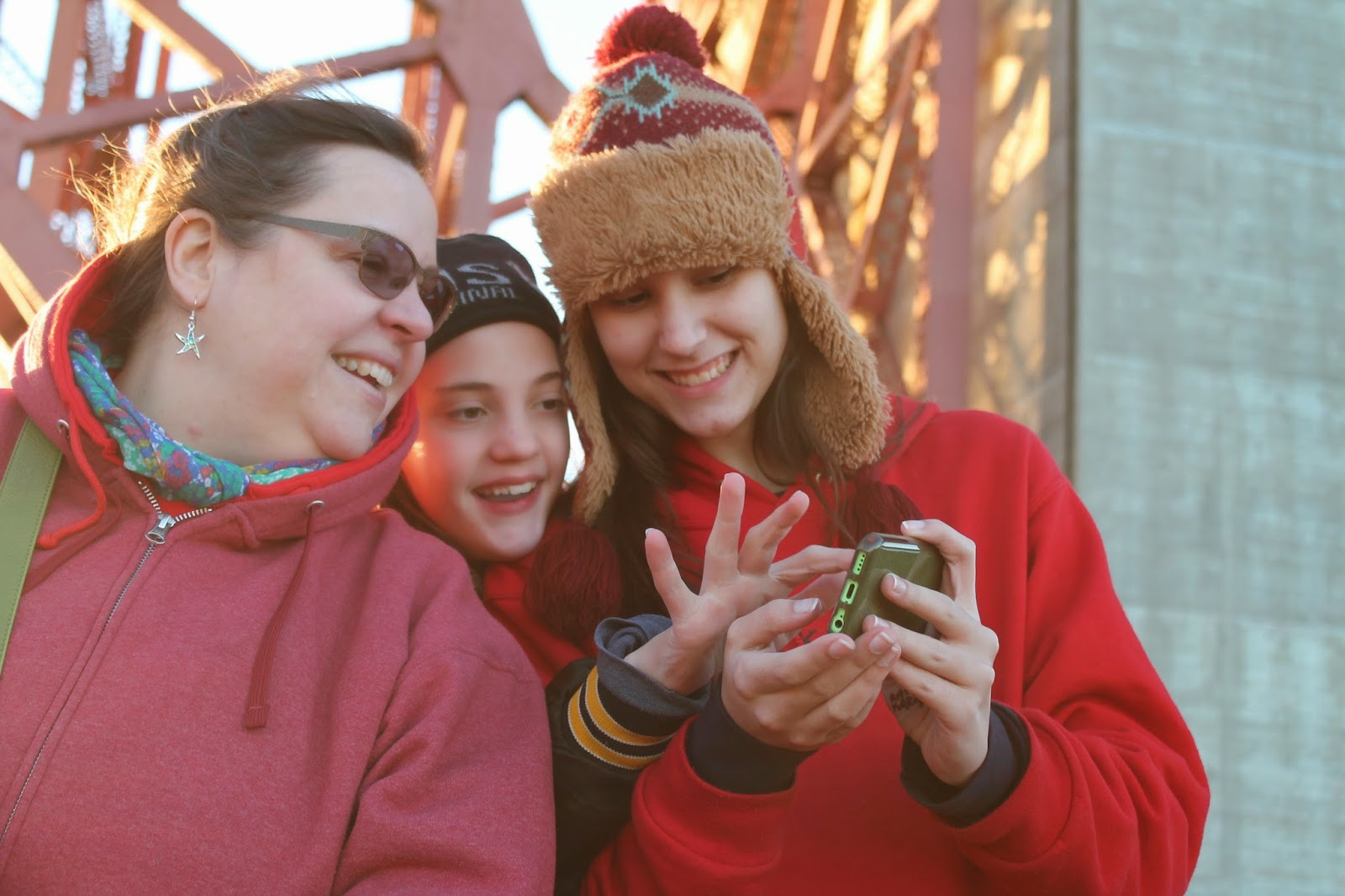 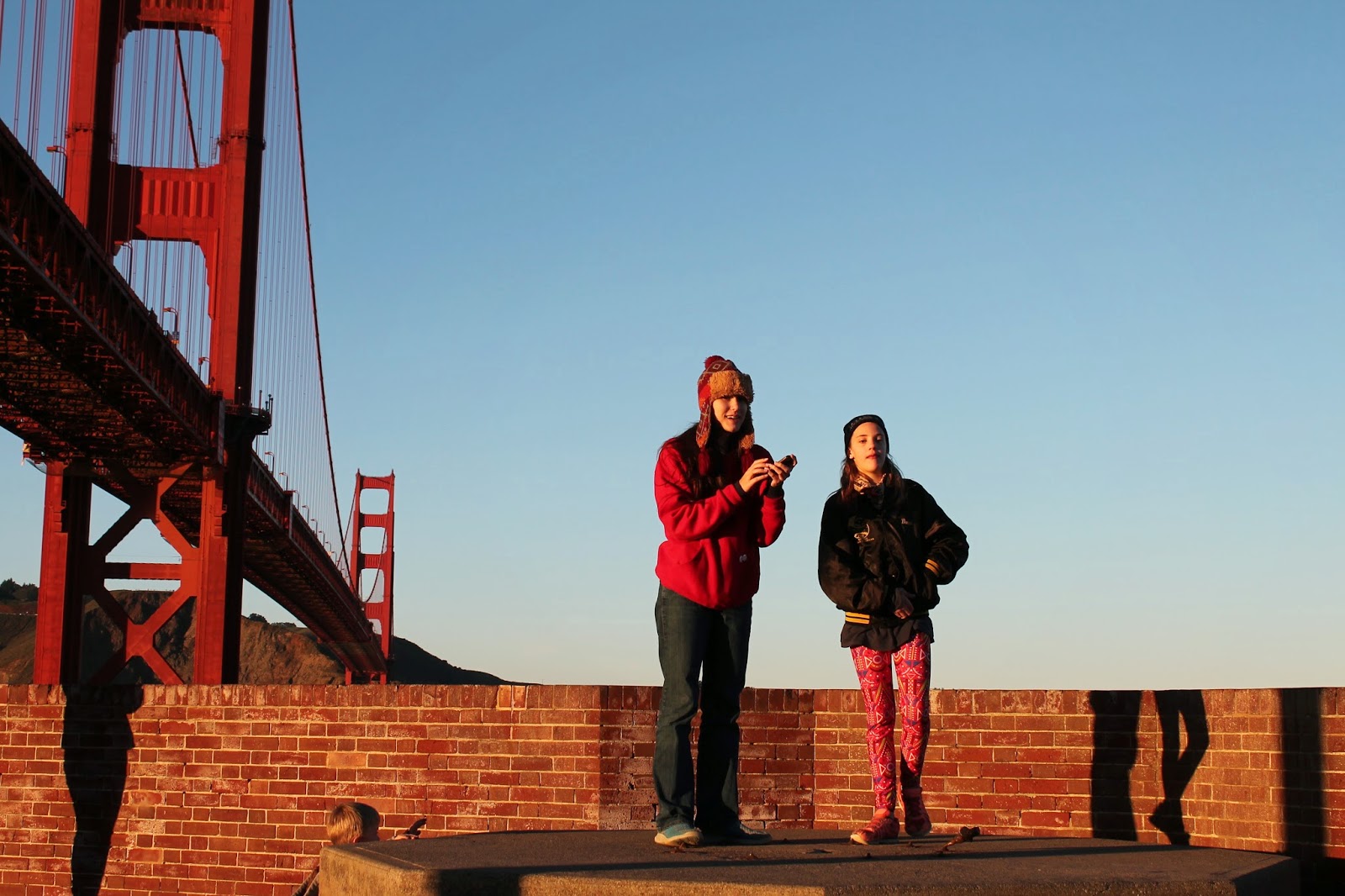 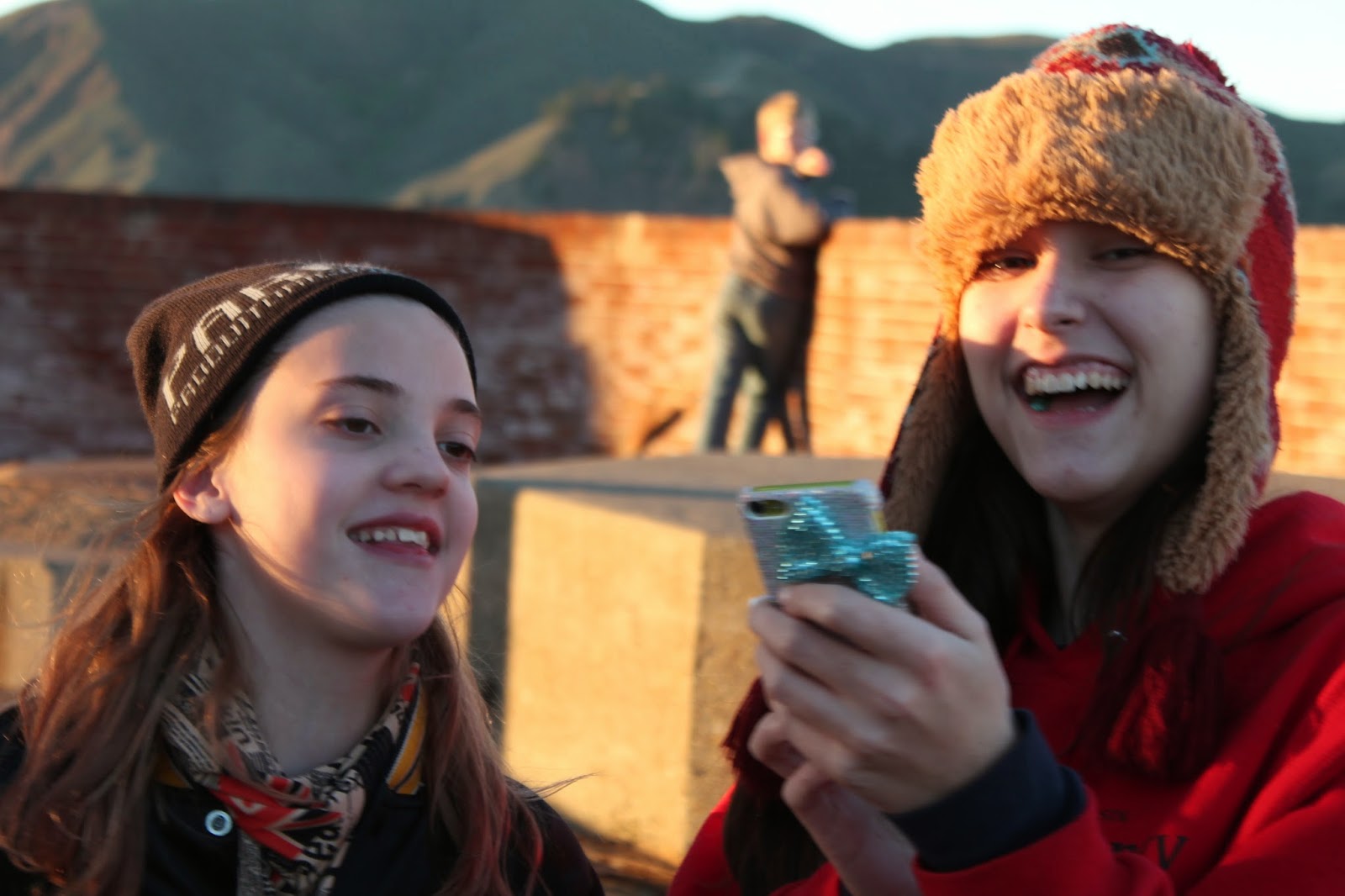 We had a lovely time out in San Francisco, and a big thank you to Geoff and Dave for welcoming us into their city and home!
Posted by David at 1:49 PM