1. My children are now old enough to trick-or-treat without me.  They got themselves dolled up into their costumes – Lauren as a lion, Tabitha as a vampire – and with their various friends they set off into the night to shake down the neighbors for candy.  If it hadn’t been so cold out – it did, in fact, snow a bit earlier in the day – they’d probably still be out there.  As it was they came back within the allotted time, chilled to the bone and weighed down with the full diabetes starter kit. 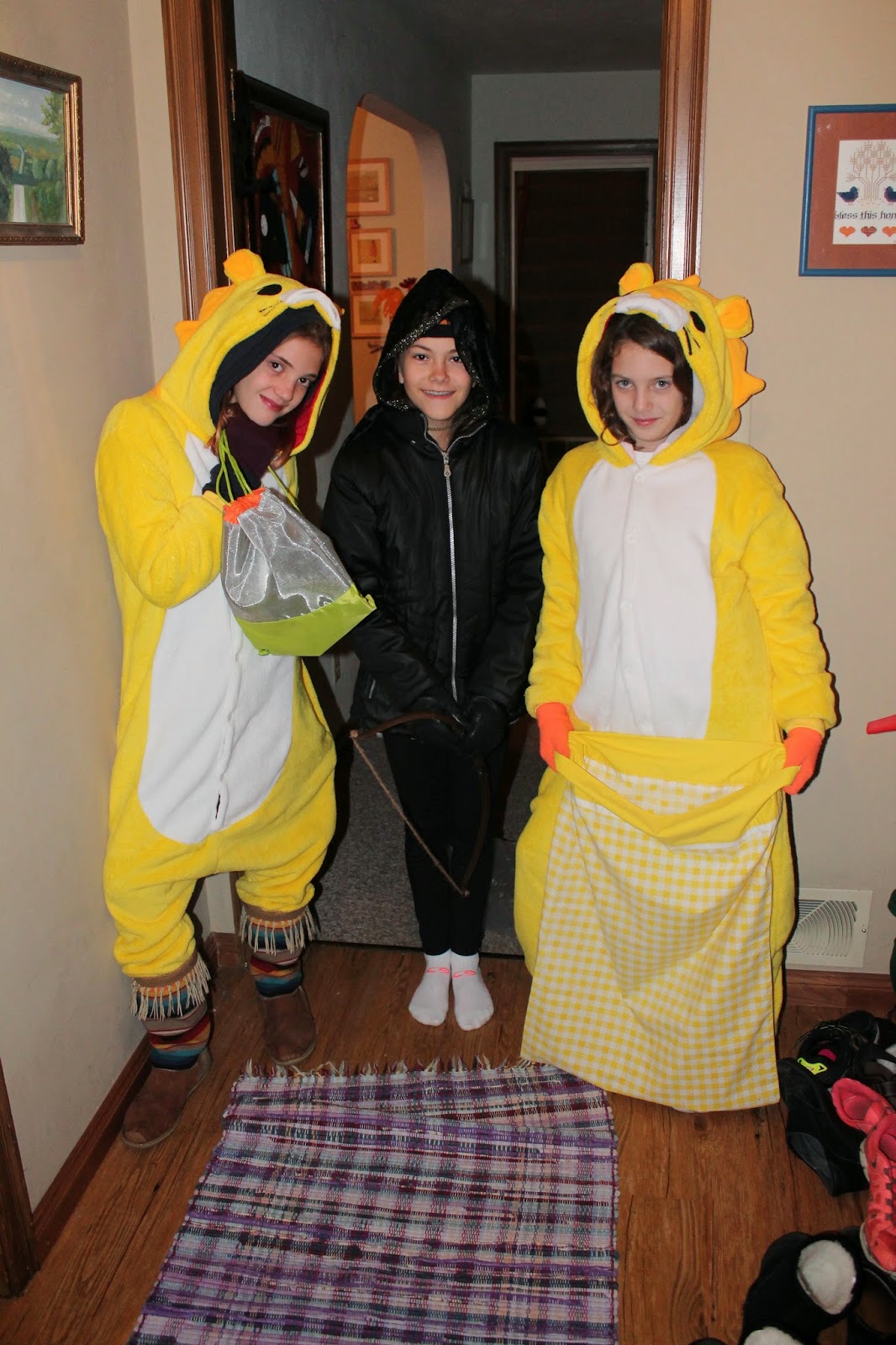 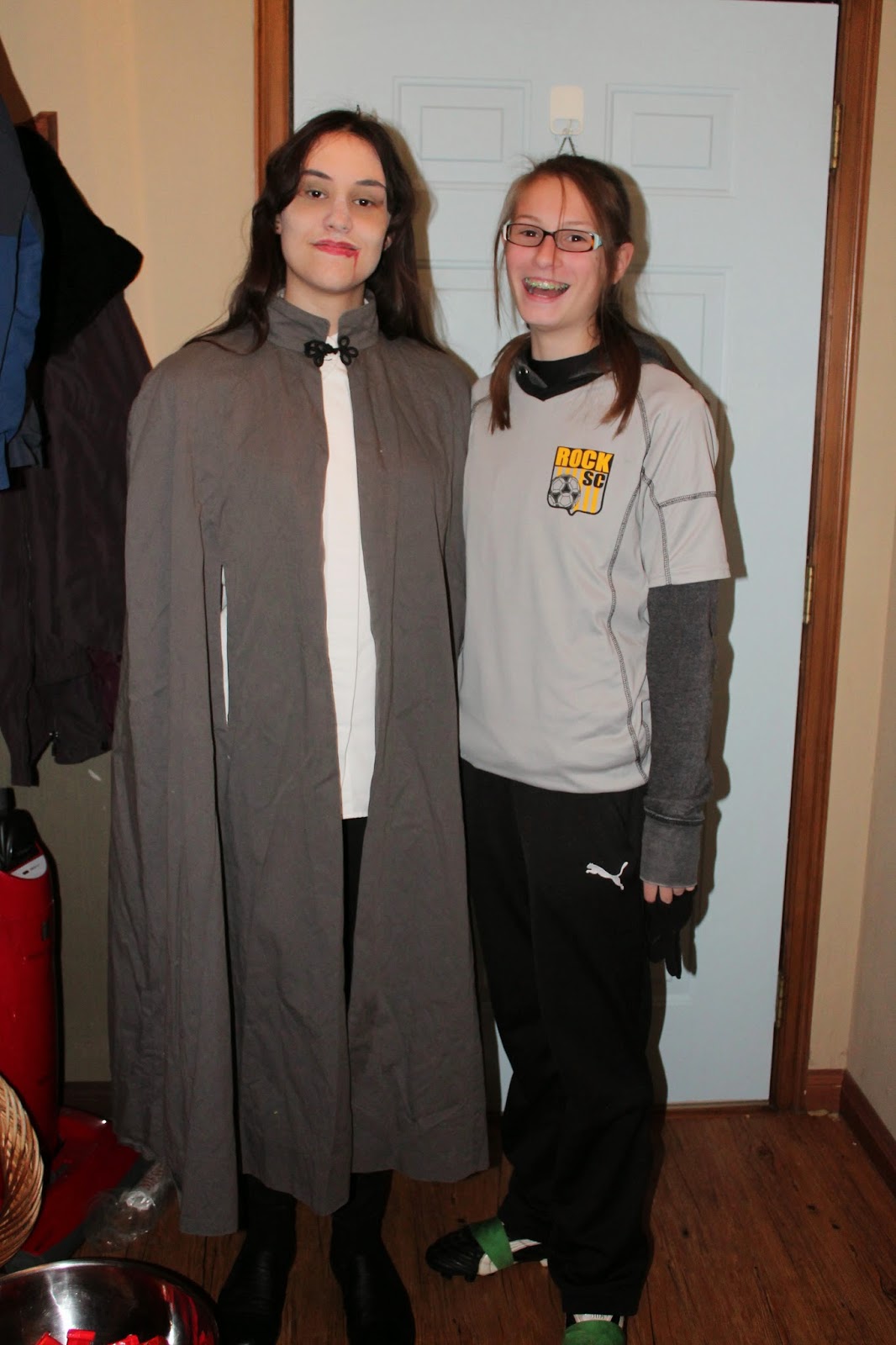 2. You have not fully experienced the wonders of cutthroat capitalism until you have watched four heavily laden trick-or-treaters wheel and deal in after-hours trading session.  Call the NYSE – I’ve found your next group of brokers.

3. Naturally that night was also the night our refrigerator decided to leak all over the kitchen floor.  On the one hand, it appears to be something involving the water line into the icemaker, which means that the basic mechanics of the appliance are probably still okay.  On the other hand, finding this out meant moving the thing away from the wall, which is a job for Hercules’ bigger, dumber, considerably younger and more fit cousin.

4. I spent the week being evaluated by my peers, over at Mid-Range Campus.  It’s been a long time since anyone from the History Department has sat in on my classes, and I suppose they’re making up for lost time by having two different people do that in two different classes.  I actually like it when they do this, though.  I’m confident enough in my teaching that I regard it as a chance to demonstrate why I should be in their employ, preferably full-time and long-term, and it’s a whole new audience to aim for – like many introverts, I enjoy performing set-piece theater.  I only got a chance to speak with one of the reviewers afterward and he seemed to like what he saw, so that’s a good sign.  I’ll try to catch up to the other one next week.

5. Last week was also Parent-Teacher Conference night at both Mighty Clever Guy Middle School and Local Businessman High School.  In some ways MCGMS has the better system – you actually make an appointment, so you don’t have to wander in and randomly hope that your child’s teachers are available the way you do at LBHS, where the teachers are arrayed one to a table in the lunch area, grouped by subject matter – but on the other hand that appointment is with your child’s homeroom teacher, arguably the teacher who knows the least possible amount about your child’s actual academic situation, so if you actually want to speak to the teachers who deal with substantive educational matters related to your child you have to wander around and squeeze yourself in between appointments.  And thus the circle of life is preserved.  But the evening went well for all concerned.

At MCGMS we got to speak to most of Lauren’s teachers, who were all uniformly pleased with her performance so far and the one teacher whose report was worrisome to Lauren calmed her fears about the grade in question, which appears to have been a computer error.  Plus Tabitha got to visit with some of her old teachers and there was a book fair at which both girls managed to find a book they wanted, so it was just full of Win all around.

At LBHS we were similarly lucky with Tabitha’s teachers, most of whom we managed to catch and all of those so caught reported back how well she was adapting to the high school curriculum and environment.  On top of this, a fortuitous meeting with her academic advisor led to a 20-minute meeting with the Guidance Office, which in turn led to a new chemistry teacher to replace the one who was boring her to tears and leaching out the interest in the subject that Kim had so painstakingly instilled over the years.  We actually spoke to him too – a very nice man, clearly conscientious about his job and concerned for his students, who nearly put me to sleep in a four-minute conversation, so I can see the issue Tabitha was having in his class.  But starting Monday there will be a new class with a teacher she already likes, who seems very good at her job too.  More Win, everywhere you look.

6. I am very much liking the Peter Capaldi version of Doctor Who.  He plays the character much more darkly than Matt Smith or David Tennant did, and is far more alien in affect than Christopher Eccleston’s version.  I hope he sticks around for a while, though I am not optimistic about that – the various websites and memes that concern themselves with such things seem to be leaning toward him being a one-season act.  That would be a shame, I think.  For a show that can get awfully twee at times it is often saved by its darker and more serious ethical core, and Capaldi taps into that fairly well.  Plus the writing has gotten better, and that never hurts.

7. Lauren’s birthday is being spread around the calendar, as our birthday seasons tend to do in this family.  We didn’t do a whole lot on her actual birthday, as it was Halloween and all that, but yesterday we had the official Birthday Supper of her choice (build-your-own hoagies, butternut squash, and dilly-beans) and today we’re slowly working on the birthday cupcakes that nobody had the room for after dinner.  Next week will be the actual party for her friends.  If she keeps this up, she might be able to spread this out until her next birthday.

8. I will be so, so glad to see the back end of this election.  Not that I expect anything to change, but at least I won’t be harassed by the forces of evil every time I turn on the television or log into the internet (seriously, Facebook?  Why do you force-feed me campaign ads from far-right extremists?).  From all evidence it appears that Governor Teabagger (a wholly-owned subsidiary of Koch Industries) is running scared.  This is the only reason I can think of why his puppetmasters have plastered the state with duplicitous signage from one end to the other – seriously, there are so many signs praising his glorious leadership that you begin to think you’re in North Korea, which in many ways has proven to be not all that far from the truth here in Teabagistan.  I sincerely doubt the election will change anything – to be honest, even if the voters choose to throw him out (a vanishingly remote possibility, given the level of obtuseness and bull-headed reactionary anger on full display every time one points out the obvious damage that man has done to this state) the fact is that the GOP counts the votes in Wisconsin and their math has proven to be incredibly suspect since Governor Teabagger (a wholly-owned subsidiary of Koch Industries) came to power.  Look for an announced margin of victory within 0.5% of the declared victory in his recall election, and then look for a blisteringly vicious campaign of slander and lies should anyone dare to challenge it.  Because MURCA!

9. With any luck we will have our bathroom back by tomorrow.  The old tub is gone, the new shower stall is mostly in, and soon we will be presentable for company once again.  With any luck the cat will then stop freaking out and come down from the ceiling where she has been stuck ever since our old neighbor Adam – our go-to guy for projects like this when we want them done right, as opposed to having me do them – fired up the Sawzall.  Maybe we should have trimmed her claws before this project started.  Oh well.  Hindsight.
Posted by David at 12:34 PM