A Stitch In Time

Both cars are now rid of the dirt from the gravel road leading into Tabitha’s summer school site, out there in the wilderness on the outskirts of Our Little Town, and this means that Summer School Phase 1 is over. It’s nice to have benchmarks.

Tabitha spent the summer learning survival skills, which seemed to boil down to how to build a fire, how to make a shelter, and how to consume your weight in wild blackberries. And really, that’s pretty much all you need.

It was also a pretty nice shelter. 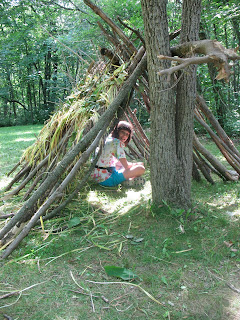 Lauren spent the last month making no-bake treats, learning about dinosaurs, and sewing. And she came home with quite a nice little pillow – a red panda that she now has to think up another name for, since the first one no longer applies. She was originally going to leave the black muzzle a solid sheet of black and call her creation, “Panda Vader,” but the temptation of having eyes proved to be too much. 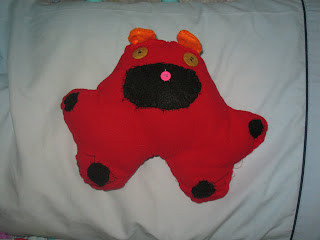 From the time I entered kindergarten to the time I graduated with my PhD was about thirty years, and in those three decades the only class I ever failed was 7th-grade sewing. This really disappointed my grandmother, who had worked as a seamstress before marrying my grandfather back in the 30s. Apparently that sort of thing skipped me.

It was a 9-week class, and we were tasked with creating two things – a pillow in the shape of a letter, and a choice of a more interesting project.

I finished the letter pillow – a red K, for some reason, which I still have – and decided that my second project would be a dufflebag. It sounded more useful than a letter pillow, and I figured, “How hard can it be?”

You know where this is going.

As the quarter progressed my dufflebag did not, until finally it was a week before the end of the quarter and I needed to stay after school to try to get it done. Fortunately the teacher – a long-suffering woman whose name escapes me – had scheduled hours for such activities, almost as if she expected a few of us to be in this boat. Imagine!

So one day I stayed late, got out my stuff and began to get set up.

Now, the thing you have to understand is that I had never really figured out how to make the bobbin work. All my stitching looked pretty good from the top, but underneath it was a rabbit warren of loops and dashed hopes. This upset my teacher more than me, and she made it clear that if I were to have any hope of doing well in the class I would need to get that resolved.

After about ten minutes of diligent sewing I lifted up the presser foot on the sewing machine to check on my bobbin stitches. Sure enough – loops and dashed hopes. And I thought, oh well. I don't need an A. If I just get it finished, maybe she’ll let me slide. So I started sewing again.

See what I left out there? That part about putting the presser foot back down? Do you know what sound a sewing needle makes when it hits a presser foot that has vibrated into its path? It’s a sharp metallic PING, after which you are left with two pieces of sewing needle and a Very Concerned Teacher standing over you, because she has heard that sound before, yes she has.

Well, I figured that was why they made you buy the extra needles in the first place.

So I carefully undid the pieces of the old needle, installed a new one, threaded all the various bits into where they were supposed to go, and started up again.

See what I left out there, again?

This time when the needle hit the vibrating presser foot it didn’t break. It bent itself into a fishhook shape. That sounds like a series of sharp metallic PINGS, by the way.

At that point the teacher came over, laid her hand on my shoulder and said, “David, go home.”

I’m glad I have children who can handle sewing.
Posted by David at 7:38 PM

Oh, the joys of teachers who can't teach. I can picture the fear - she sees a child who just doesn't "get it", and she realises she will have to explain something she doesn't understand herself. Boys, in particular, will happily fiddle with a mechanism for eons to try to get it to work, as long as you give them some sort of an explanation of how the mechanism works. Flashlight not working? Well, there's the battery charge, the connections, the filament in the bulb. But I suspect your sewing teacher had no clue how a sewing machine really worked, or what "tension" in a thread means, nor exactly what the difference between thickness and density is, and how that affects things. Not that my teacher was any different - she could teach us to thread the machine, and that was the limit of her knowledge. Fortunately, Mom had already taught me to sew so I got through.

I've sewn a dozen quilts and I STILL don't get the tension thing. I know that when it doesn't work, I should adjust it, but that doesn't work, either. Most of the time I just re-thread the darn thing. Fortunately, this doesn't happen very often.

This is precious. It's ok Dave, you don't have to sew anymore.