Today was the first day of summer school down at Home Campus, where I have a whole new crop of students to initiate into the mysteries of early American history. There are times when it is tempting to slide into the whole Nicolas Cage/Dan Brown conspiracy theory thing and spin wild tales of nefarious secret organizations working their will throughout time on the rest of us, but in the current political climate I’m not sure whether anyone would see the satire in it or not. It’s hard to get a more tenuous relationship with reality than the one inordinate numbers of Americans seriously – and proudly – claim to have these days, and this is not something I wish to encourage.

So reality it is.

I enjoy teaching this class, and the fact that someone is willing to pay me money to do so in this economic climate is a grand and glorious thing. But it does come at a price.

Tabitha and Lauren’s softball season began at the top of the month, and once again I was an assistant coach for Lauren’s Hot Pink team, down in the A league. The A league is a great place, where neither runs nor outs count, everyone bats, and my main job as first-base coach is to point runners toward second when the next hitter comes along. Fielding is an exercise in voice-activated human pinball – the ball comes out into the field and we try to activate whichever girl is closest to it so she can retrieve it and toss it toward the designated receiving base of the moment. Lauren is an excellent hitter. 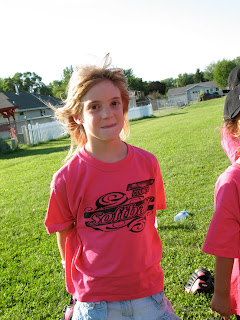 In Tabitha’s league – where this year she, too, is on the Hot Pink team – they count all the things that one is supposed to count. They even have an umpire, which makes it very official. I don’t usually get to see Tabitha’s games, but I did make it to one when Lauren’s team wasn’t playing. It was very different. Tabby did a very nice job in the field, and got a couple of hits as well. 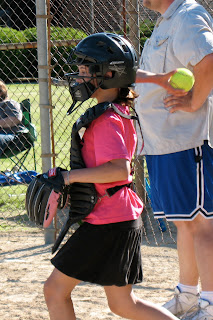 But now I’m teaching, and I will miss most of the games from now on.
Posted by David at 9:38 PM