My office is returning back to its normal state of affairs. I am not sure that this is entirely a good thing.

On the one hand, it means that the new carpeting is in. This in turn means that the World's Ugliest Linoleum is now safely hidden away from prying eyes for a while. I know that this is not permanent - nothing that ugly can ever be permanently taken out of circulation and I'm not even going to pretend otherwise lest I turn into the Evil Overlord maniacally laughing about how the Orb of Power has been safely transported across the Seas of Difficulties, the Desert of Despair and the Forest of Squelchy Swamps, tossed into the Abyss of Darkness and covered over with the best tarp that Discount Eddie's Tarp Service could provide and now it will never be found again - NEVER DO YOU HEAR? - shortly before the Hero turns up with it in his jacket pocket.

Heroes are such annoying creatures that way.

On the other hand, it also means that the office is quickly becoming smaller again. I had gotten kind of used to it without all that stuff in it, and now I'm having second thoughts about putting all that stuff back into it. Oh, I know it will all go back, or at least most of it will, but for a while it was nice having all that space.

The carpet dudes came last Wednesday and did a very nice job as far as I could tell. It's a small room with no weird angles so they were in and out in about 90 minutes, after which I nailed the quarter round back on. 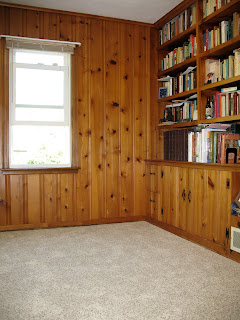 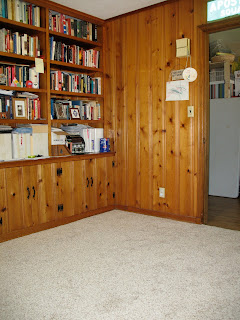 And then I spent what time I could putting the stuff back into it. This was complicated by the fact that apparently we are incapable of having only one project at a time going on around here.

Kim has been jonesing for a new television for a while now. I really don't care one way or another, since my television viewing habits are rather sub-par - I just don't watch enough of it to make it worth spending any money on a new one to me. But the girls enjoy their shows and Kim had been putting away spare change into her piggy bank since the last time we bought a television, and last week she had enough to buy a new flatscreen tv.

Unfortunately it was too big for the entertainment center we had bought in 1999, so the obvious solution to all of this was to move every piece of downstairs furniture except the dining room table in order to arrive at a furniture situation that would work.  It's the Tetris School of interior decorating.

Oh, and we had a houseguest coming this weekend, so all that had to be accomplished by 6pm on Saturday, a day I spent far too much of proctoring the ACTs for a room of teenagers.  ("Pencils down, people!")

But it all got moved into the appropriate rooms and places, and since then I've been slowly putting my office back together. Right now it looks like this: 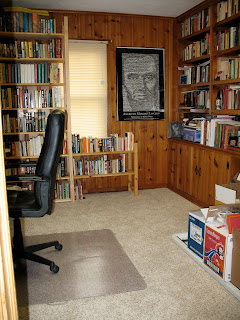 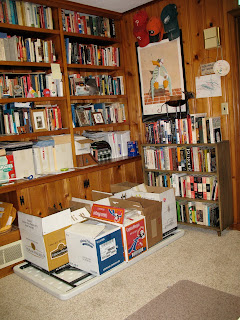 Still a little bit to go, but that's all just details.

The long national nightmare is over. As Kim said, instead of looking like vomit my carpet now looks like oatmeal. And that's progress.
Posted by David at 9:24 PM

Oatmeal is much better. Oatmeal rocks.