Beauty may only be skin deep, but ugly goes clean to the bone. Or in this case, to the sub-flooring.

The carpeting project in my home office continues apace. And as always with such efforts, the project itself is the least of the issues at hand. By the time they come to put the carpeting down, most of the actual work will have been done.

For this project, that meant moving most of the several thousand books in that room, plus the bookcases, the desk (two filing cabinets and a large steel door), and an assortment of debris, bric-a-brac and related items that could stock a flea market well into the next millennium.

These are the "before" pictures. Bear in mind that a) there is another floor-to-ceiling, double-shelved bookcase just out of frame to the left in the first picture, and b) I spent a day or two cleaning in order to get it to look this neat. 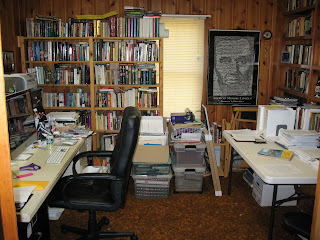 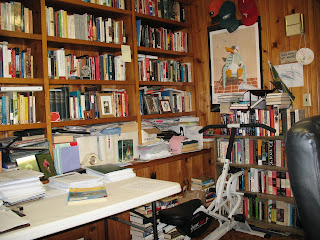 Much of last week was devoted to Stuff Removal - packing things up in my vast collection of liquor boxes and taking them out of my office. Which in turn brings up an interesting question.

One of the things you learn as an infant is "object permanence" - the idea that objects continue to exist even when you can't see them. It's a difficult lesson to learn and one that politicians seem to forget routinely (national debt? what national debt?), but nevertheless one that has certain consequences - in particular, the idea that permanent objects need temporary storage places when removed from their native habitats.

The house is only so big.

It took some doing, and the living room is considerably easier to throw pennies across now than it was a couple of weeks ago, but eventually that problem got resolved. At that point I was left with an office devoid of stuff, and for the first time in a long time the carpeting was revealed in all its glory. 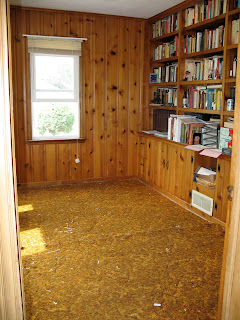 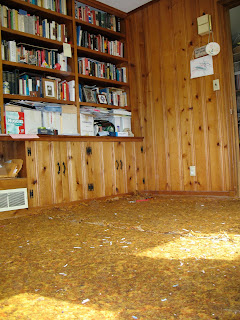 This, folks, is carpeting as weaponry. Carpeting so ugly that it is banned by treaty in certain parts of the world. Carpeting that cannot even be looked at with the naked eye without extensive training, special lenses, or blood-alcohol levels at whole-number multiples of legal intoxication.

And the question then becomes why. Why would anyone put such carpeting into that room in the first place?

The answer, it turns out, is to cover up the even uglier linoleum underneath. 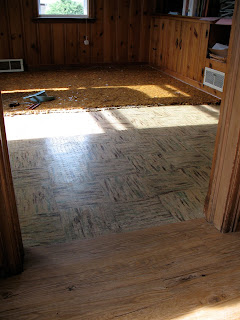 Sweet dancing monkeys on a stick, but that is a product that could only have been produced by blindfolded workers. This is probably the original linoleum from when the house was built, in the late 1940s, and I'm sure that even now, somewhere in a padded cell, is the last remaining installer from that job, still gibbering at the walls.

It gets even better when there's no carpeting in the way. 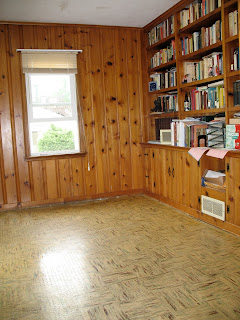 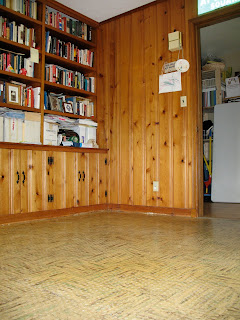 The new carpeting should be here next week.

I'm really looking forward to it.
Posted by David at 2:17 PM

I LOVE the wood paneling. (sp?)

It came with the house. I don't think it's quite "paneling," since it's actual boards rather than veneer, but I like it too.

Nope. The carpet is WAY more ugly than the linoleum. WAY.