Our Trip to San Francisco - Day 2

San Francisco is a triumph of urban planning over geography.

Sometime back in the middle of the nineteenth century, some enterprising public citizen turned to whatever companions were standing nearby and said to them, "You see those mountains over there? The ones that go straight up and down? The ones on the end of that peninsula sticking out into the sea, so there's no room to go around them and no place to go if there were? I'm going to put a city there, one that will have no ability whatsoever to expand when its population grows, and when I do it will have a grid-system of streets that will pay no attention to topography at all." Whereupon those companions promptly dosed him liberally with opium, dressed him in tails and had him run for Congress - anything to get him away from California.

But the next guy who had that same idea? He made it stick.

Now, we've known about this for years now - we're not newcomers to San Francisco, having visited Geoff and Dave several times before this trip. But living in the midwest, where the definition of "hill" is often a matter of conjecture and debate, it does take some time to reacclimate to a place where the notion of "flat" is similarly open to discussion. We re-discovered all this on our second day in the city, sometime shortly before lunch.

We spent the morning happily trolling the beach around Crissy Field, which is on the grounds of the Presidio, an old Army base now slowly being converted into any number of civilian uses. It is, as most places in San Francisco are, a beautifully scenic location, and not all that far from the Golden Gate Bridge. 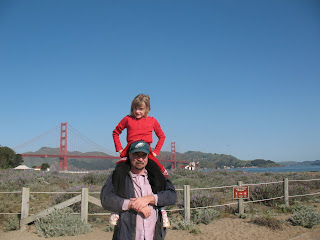 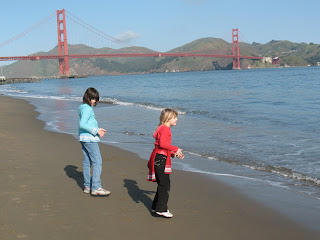 Apparently, there used to be whales there.  They're gone, but their bones remain. 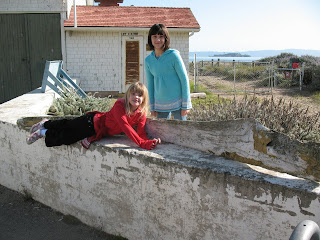 It is now a haven for dogs. In the hour or two that we spent hanging around the beach we must have seen a bezillion dogs (that's slightly less than a bejillion and rather more than a metric butt-load, for those interested in the math). They played in the surf and let the girls play with them as well, and all was meet, just and good.

Eventually we worked our way up to the gift shop (of course it had a gift shop - don't be silly), where I learned a very valuable lesson about San Francisco: never ask anyone for a plastic bag. Just don't. They will stare daggers at you, as if you had just asked them an unspeakably obscene question involving the family pet, three rubber bands and a jar of mayonnaise, and then they will icily inform you that there are no such bags to be had here, thank you very much.

At least they did that when I asked. I don't know - your mileage may vary - but I wouldn't try it if I were you.

There was also a short pier next to the gift shop where the Park Service rangers were in the process of borrowing sea creatures caught by some of the nearby fishermen so they could show them to a school group they had visiting. The fishermen were pretty cool about it, though, and they let us play with the various crabs and starfish as well. So: fun and educational. 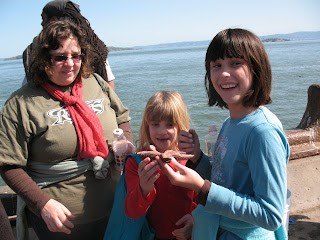 On our way back to the Mission District for lunch, we made a detour so we could fulfill one of the conditions of the trip and drive down Lombard Street.

Lombard Street has been on Lauren's list of things to do ever since I introduced the girls to the old Bill Cosby routine, "Driving in San Francisco" - a classic that my brother and I memorized as children by listening to our parents' old 33rpm LP of it. Now get off my lawn. In that routine Cosby notes, "They built a street out there called Lombard Street that goes straight down, and they're not satisfied with you killing yourself that way. They put grooves and curves in it and then they put flowers there where they bury the people who've killed themselves. Lombard Street, wonderful street."

How could we miss this?

So we went to the top of Lombard Street, and very slowly and carefully made our way down the eight switchbacks that allow you to drive the one-block-long famous section of Lombard Street with the flowers. 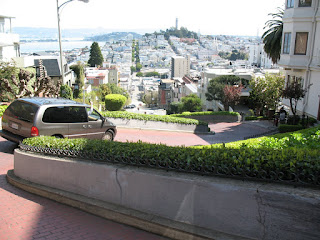 And when Dave found a parking spot at the bottom (mirabile dictu) we started up on foot. 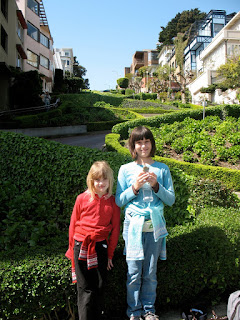 On the way up we met the mailman, who clearly drew the short straw somewhere along the line since he was hauling a pile of mail up and down a street that had stairs instead of sidewalks. But he was pleasant, and we made it to the top without incident. We even made it down to the bottom similarly unscathed - down is harder, simply because when you fall going up you just lie there, but when you fall going down you tend to roll.

Lunch was back in the Mission District, at the Pakistani restaurant around the corner from Geoff and Dave's apartment. We ordered up a storm of food that you cannot find in Our Little Town and tucked in with enthusiasm. Even Tabitha, normally not someone who will eat anything more adventurous than a plain cheeseburger (meat, cheese, bun) enjoyed the chicken biryani and - even more surprising - the rather spicy chicken dish that we got as well. There is hope after all.

Refreshed and recharged, we took the BART down to Geoff's workplace, where we bought all sorts of good snacks, were introduced to a significant chunk of the staff and had our picture taken with the cold drinks, just because we could.  We're just that way, really. 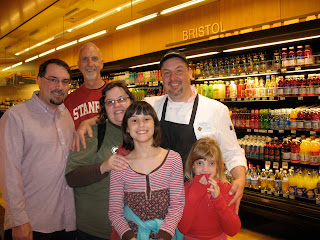 And then it was Cable Car Time!

You can't go to San Francisco and not ride the cable cars. Yes, it's touristy, but sweet dancing monkeys on a stick, people, we're tourists. And it's fun. You get used to it after a while and it becomes just another form of public transportation but it's still unspeakably cool even so. So we bought our day passes, waited in the long line, and hopped on board. 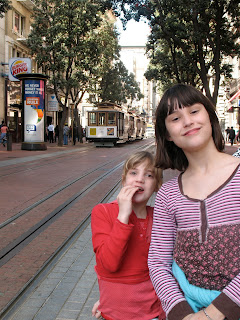 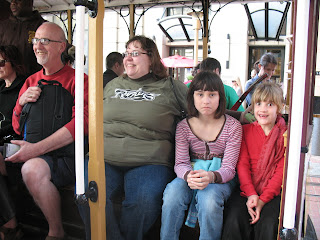 It's quite a ride, especially if you're standing on the running board, hanging on as the cable car scales the peaks of San Francisco's streets and turns corners without slowing down appreciably. Fortunately I spent five years as a volunteer firefighter back when they still had tailboards on fire engines, so all that experience came in handy.

We stopped off at the Cable Car Museum, which is essentially the central hub of the cable system with a few exhibits and a gift shop grafted onto it. If you like to see how things work, it is just amazing - they have the actual cables there running around on their gears and disappearing underneath the streets, and there are all sorts of models and actual pieces of cable cars showing you exactly how they grip the cables and make those turns. There's even a faded old movie from the 70s on a continuous loop, directed by a young Robert Altman no less, that shows you in the ponderous documentary style of the day how it all comes together. All this and free admission! It does not get better than that.  No it does not.

We hopped back on the cable car after that and headed down to Chinatown and Little Italy, which run cheek by jowl together, where we hung out at the City Lights Bookstore for a while before heading over to another one of the parks (again with the dogs - Lauren's campaign for us to get a dog reached fever pitch in San Francisco). Geoff joined us when he got off work and we found a nice Italian restaurant that managed to squeeze the six of us into tables (nothing in San Francisco has much space, and since we had to split up they gave us each a free glass of wine - cheers!) and serve us a good meal.

I wish the city of Paris would ban plastic bags. The Irish did it. Darn things are making fish suffocate, says an ecologist friend of mine.
Of course, there are people like my husband who would buy them anyway.
Oh Well.

Bea, I'm impressed! The stalled car was from a different part of that routine, where he has to take a hill because of a detour. It's not Lombard St. But not many people know that routine at all anymore.