A Host of Thanksgivings

It takes a lot longer to fry a turkey than the internet will tell you it does.

Way back when, sometime in the distant past, we had a deep-fried turkey prepared by some friends of ours. Now, when I heard that this was on the menu, I was somewhat dubious. No, check that, I was appalled. Deep-fry a turkey? What kind of culinary redneck nonsense is going on here? Will we be deep-frying candy bars for dessert?

Oh me of little faith.

It turns out that deep-frying a turkey is just the most wonderful way of preparing that dish you can imagine. It's flavorful. It's crispy. It's beyond moist. And it is not greasy at all. Who knew?

We were so impressed that a couple of months later those same friends gave us a turkey fryer as a present.

The problem with this was that you need an oil that can handle the high temperatures, and mostly this means peanut oil. And by the time we thought about actually using the fryer, peanuts were unwelcome around here.

But now peanuts are just fine. And we needed our own turkey, because we'd been dining at other people's houses all Thanksgiving and had no leftovers. None! No turkey sandwiches! What is the world coming to?

How did we get into this situation?

Well, on the actual Thanksgiving Day we mostly just hung out around the house, for it was Pie Time! We were on pie duty for the family feast this year, which was scheduled to be held up at Kim's parents' house on Friday, so it seemed like a good idea to make the pies on Thursday. Although, seriously, when is it not a good day to make pies? Maybe during an earthquake, because it's hard to fill your pie crust without spilling everything when the table is doing the cha cha across your floor and the cabinetry is falling on your head. Maybe. But otherwise? Pie Time!

First, we made The World's Best Apple Pie, which has a cornmeal crust, chopped cranberries and currents in it. And there was a normal apple pie, made from a recipe we got from a cartoon dog. No, check that - we got it from the cartoon mother of the cartoon dog. It made sense at the time, really, and the pie is pretty good. 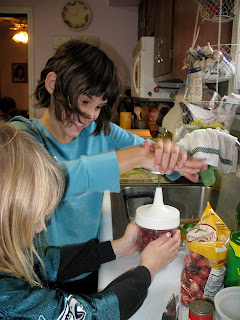 We love apple pies, because they allow us to haul out The Gizmo. 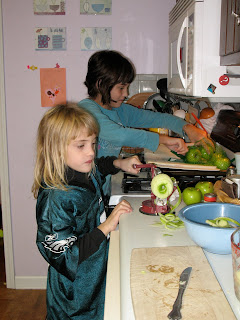 Not only does it speed up the whole process immensely, but also you get apple peelings as long as your arm. Life. Is. Good. 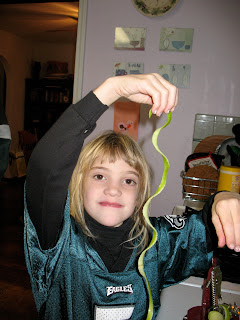 There were also a couple of pumpkin pies, which Kim made from scratch because we had a nice baking pumpkin and apparently there was some kind of pumpkin shortage so we felt we ought to use it up. Although given the immense number of pumpkins that moved across our property this fall, I'm inclined to believe that the Libby's people just made that up. Those sneaky pumpkin cartels, creating artificial shortages to bump up the prices and cause panic in the streets. Well, at least some kind of mild concern in the streets, certainly among those who heard the news, which wasn't most people I know.

But the pumpkin pies were good, according to people who like pumpkin pies. I've never been a fan myself, which is yet another sign of just how out of touch with my culture I am. Honestly, it's a wonder someone doesn't just box me up and ship me off somewhere out of the way.

We ate dinner that night with our friends Dan, Theresa and Grace, who were also headed out for a Big Family Dinner later on in the weekend and just wanted a low-key turkey festival. It was good - we had tasty food, the girls wore themselves out playing Wii games, and the adults got to sit around and talk, which is what adults do for fun most of the time, much to the consternation of our children.

Friday we went up to Kim's parents' house, for to engage in another feast! All the cool kids were there! We ate more turkey and had a grand time hanging out. 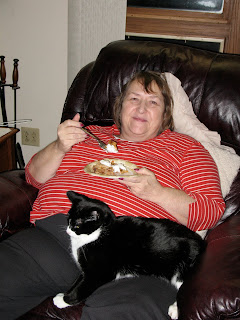 Tabitha even got us into an Uno tournament, which is both a good and a worrisome sign. It's good because we like Uno, and since her NYC cousins are learning the game it is perhaps wise to brush up before we all get together at Christmas time. On the other hand, well, it is just one step closer to having my clock cleaned by my own children. On the scale of card players, I have, through dint of ceaseless practice, finally reached a level known to professionals as a "mark," whereas Tabitha and Lauren are "sharks" and I just know I'm going to end up owing them my house. That will come soon enough, children! No need to push it. 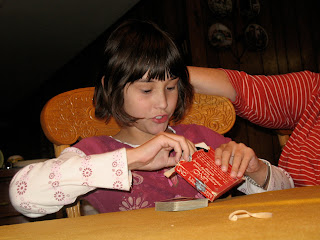 Sunday we decided to celebrate Kim's birthday by making a lemon poppyseed cake and frying a turkey for dinner. The turkey got rained out, unfortunately, but the cake was a hit. 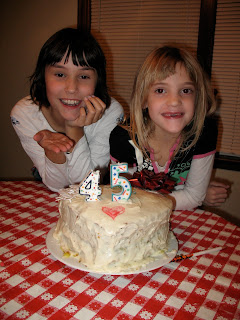 Fortunately we are due for no drug tests, so we can eat all the poppyseeds we want. 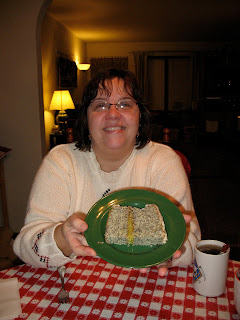 It was a good year for presents, it turned out.  Lauren wrote an original story for Kim about a lonely dragon who ultimately finds happiness and friendship, and Tabitha made a nice pair of earrings.  It's the homemade presents that you treasure, really. 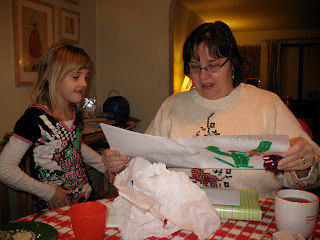 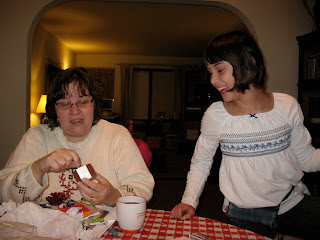 And then, on Monday, the Great Turkey Fry was on.

Lesson One: it takes about an hour and a half to two hours to heat up that much oil, not "20-30 minutes," as it says online.

Lesson Two: it takes longer to cook the bird than it says - not much longer, only 4 minutes/pound rather than 3.5 minutes - but parse that out over the size of the average turkey and it adds up.

Lesson Three: don't do this on a school day. I didn't get the oil heating up until about 5:15 or so, which is why we didn't eat dinner until after 8pm. Now, if we were living in New York or Madrid, say, this would be perfectly normal, even timely. But we live in Wisconsin, where eating dinner much later than 5:30 is considered vaguely socialist.

But it was good, and I didn't burn down the house.